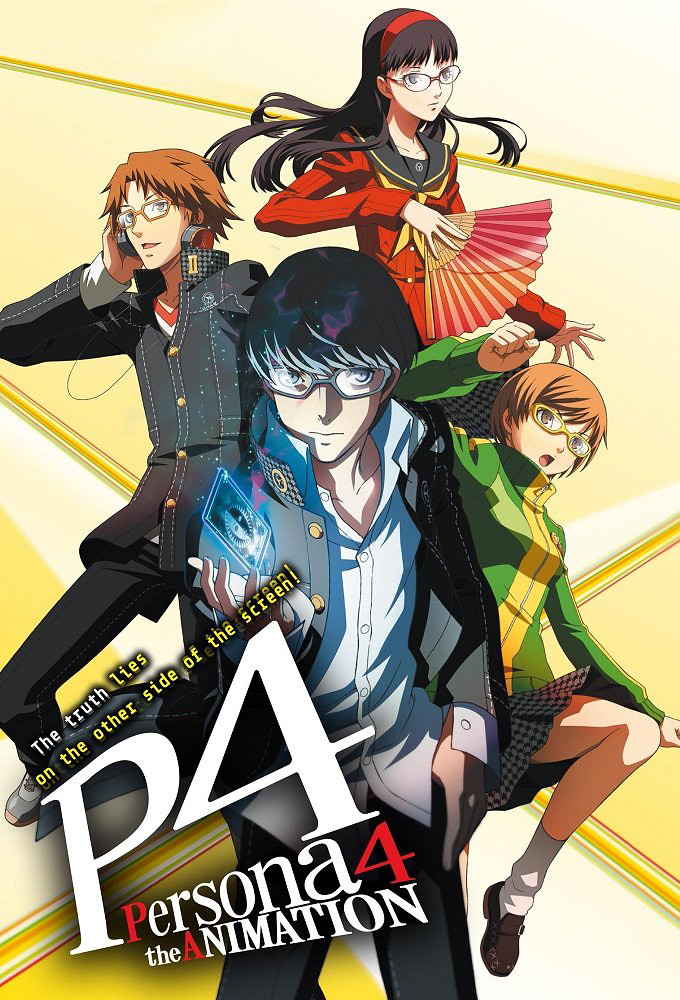 Title: Persona 4: The Animation
Anime Studio: AIC A.S.T.A.
Genre: Fantasy / Mystery / Supernatural
Serial murders have recently plagued Inaba, with the police struggling to find any leads. Despite this, due to his parents going abroad for work, Yuu Narukami moves to the small town to live with his uncle for a year. He enrolls at Yasogami High School, where he meets and befriends Yousuke Hanamura, Chie Satonaka, and Yukiko Amagi.
While hanging out together after school, the group fills Yuu in on the urban legend known as the “Midnight Channel”—a mysterious TV channel that only appears at midnight on rainy days while the viewer is alone. Curious about the claim, Yuu decides to tune in that night, only to see the next victim of the serial murders appear on the screen instead. He also finds himself being drawn into the TV, which intrigues his newfound friends enough to want to investigate.
Yuu ends up falling into the world within the TV, which is blanketed by a thick fog and swarming with hostile creatures known as “Shadows.” Realizing that this world is somehow connected to the murders, the Investigation Team forms with the goal of uncovering the mystery behind the incidents.

Based on the exceedingly popular video game franchise from Atlus Games, the anime is produced by AIC A.S.T.A. The studio itself is one I’m less familiar with in terms of their overall body of work. I am, however, a fan of their Tenchi Muyo! Ryo-Ohki and Ah! My Goddess releases. As to the property the series is based on, I have never played it. I’m aware of the franchise, of course, but it should be noted that I don’t know enough to say if there are major changes in the story here.

The general consensus of Persona 4: The Animation when it was released seemed to be that it is as good an adaption of the game as you could hope for. My main concern was that having not played through the source material, I would get lost with the anime. This turned out to be an unfounded fear. While I’m sure that there are likely to be moments within the show that you’ll pick up on quicker if you’re already acquainted with the franchise, I am very happy to report that making this your first foray into the world of Persona is not something that will hinder your enjoyment.

The series trundled along logically and the cast built gradually, giving each of the main characters some time to develop. As you can imagine with a story of alternate worlds, creature fighting and murder, the story can get pretty dark. Throughout the 26 episodes, however, there are plenty of light-hearted moments thrown in to keep things moving. Most interesting to me was the way that the story changed partway through. Just as things look like they’d been wrapped up for the characters, the series went slightly mad. It’s like the third quarter of the run hit the comedy overdrive button and almost forgot to hit the brakes.

Far from detracting from the story though, this served to further develop the characters by adding a very human quality to them. That it’s incredibly entertaining is a bonus. If you’re not a fan of comedic detours, don’t worry. The final quarter returns to the dark and sometimes strange world that is the brunt of the series.

The animation is of a very high standard. From the general interactions between characters to the action-packed fight scenes, everything moves with fluidity, and the colour palette helps create a clearly defined feel for the series. Need an example? Try the second opening video:

The vast majority of the characters are really well actualised, with my personal favourites being Yu’s best friend Yosuke Hanamura, the upbeat and slightly tomboyish Chie Satonaka, delinquent Kanji Tatsumi, and young detective Naoto Shirogane. Despite the vastly expanded number of leads that you end up with, the series never really neglects any of the heroes, apart from one: Yu Narukami.

Now, I am well aware that people may disagree with me on this one, but I just found him to be bland. He’s nice, his power levels rise steadily and he is much loved by all around him. His fights are impressive, as you’d expect, but if I’m being honest, the only times he shines are when he is thrown in at the deep end of the comedy sections, and even then he is outshone by his fellow castmates. Despite this though, it should be noted that this is not enough to cause the series to fall over.

The biggest issue the series has is in how Kanji Tatsumi is treated. There have been plenty of debates about his sexual orientation online since the game was released, and while this was intended to be left ambiguous, he definitely seems to be bisexual. His Shadow here though manifests as two giant gay men, who fondled the male leads to drain them of their fighting spirit. It’s supposed to be funny, much like when you see lesbian coded characters grab other girls without consent, but it’s really not. It kinda implies that gay men assault young boys, and that is not a stereotype that should be perpetuated.

In terms of audio, I mostly stuck with the dub of this release, which I thought was really strong. Johnny Yong Bosch puts in a great performance given how bland I found Yu to be as a character, and both Yuri Lowenthall (Yosuke) and Erin Fitzgerald (Chie) never miss a beat. This is definitely a strong example of when dubbing works well.

Persona 4 bases itself around an interesting story and a wide and varied cast of heroes that should suit all tastes. Featuring rock-solid animation, genuinely laugh-out-loud comedy, and plenty of twists and turns, there’s plenty to enjoy, even if you haven’t played the source material. The major misstep with Kanji Tatsumi prevents this from getting full marks, but it’s still a solid 4 out of 5.