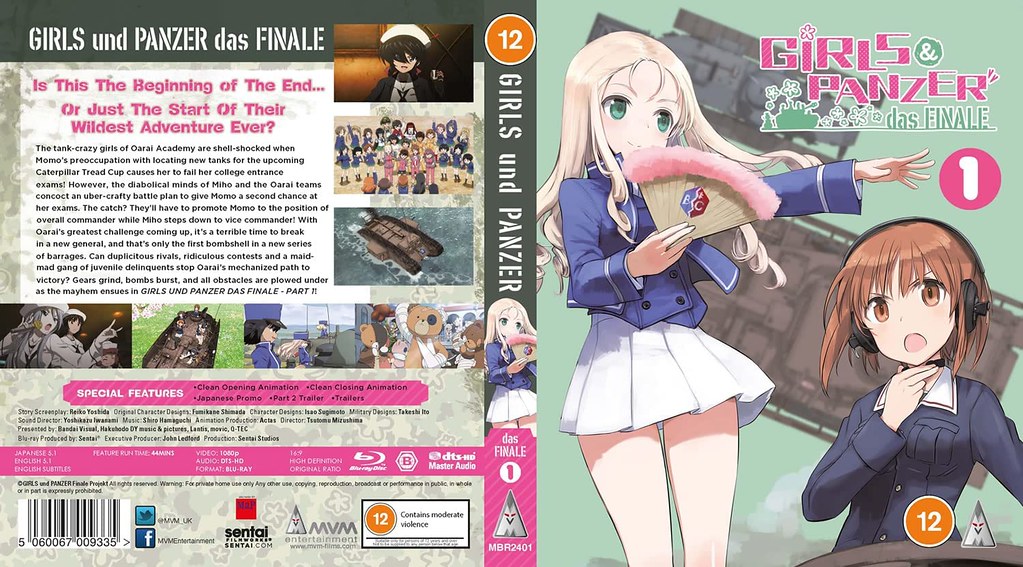 Title: Girls Und Panzer Das Finale 1
Anime Studio: Actas
Publisher: MVM Entertainment
Genre: Action/Comedy/Military
Released: April 11, 2022
Classification: 12
Language: Japanese/English
The tank-crazy girls of Ooarai Academy are shell-shocked when Momo’s preoccupation with locating new tanks for the upcoming Caterpillar Tread Cup causes her to fail her college entrance exams! However, the diabolical minds of Miho and the Ooarai teams concoct an uber-crafty battle plan to give Momo a second chance at her exams. The catch? They’ll have to promote Momo to the position of overall commander while Miho steps down to vice commander! With Ooarai’s greatest challenge coming up, it’s a terrible time to break in a new general, and that’s only the first bombshell in a new series of barrages. Can duplicitous rivals, ridiculous contests and a maidmad gang of juvenile delinquents stop Ooarai’s mechanized path to victory? Gears grind, bombs burst, and all obstacles are plowed under as the mayhem ensues.

I want to start this review by stating that I have never watched Girls Und Panzer or the sequel movie. As such, all I really knew about this release coming into it was that a good chunk of my fellow bloggers enjoyed the original run. The downside to this is that I do feel like I’m missing out on some things here. The main characters clearly have pre-established relationships, and there is no real setup for what sensha-dō (the way of the tank) actually is.

That isn’t to say that lacking this build-up makes the story hard to follow though. Everything is kept really simple in terms of how things progress, and the characters are certainly likable enough. It’s more that I feel like it’s a shame I haven’t seen how they got to this point. The bond they all share is enjoyable to watch regardless though, so I can’t complain too much.

Now, this being the first of six OVAs, it basically serves as a setup for what is to come next. We’re introduced to the initial conflict, see the girls find a way to bolster their position, and watch the first stages of the tank combat the title alludes to. With a 48-minute run-time, it’s all very compact, and that definitely serves the story well. There’s no filler in the scenes, it’s all a mix of story progression and fun shenanigans that feel tonally consistent.

What impressed me there is that it all balances out well. The humour is decent, though nothing out of the ordinary for anime. Meanwhile, the action is pretty dynamic, with some surprising (for me, being new to the franchise) touches that mix full-blown battle and actual tactical thinking. Even better, it doesn’t stray into a reliance on fan service. In many ways, this is about as good a CGDCT, Cute Girls Doing Cute Things (or Cute Girls Driving Cool Tanks?), story as I could hope for.

The battle dove headlong into the realm of CG animation. I will admit, I have mixed feelings on that as a general theme. CG in anime tends to look out of place against traditional styled animation and, truth be told, I find a lot of it be quite terrible. Here, the film does a good job of avoiding this. The animation is smooth, and while it does feel different from the rest of the release, it doesn’t feel out of place. If anything, tanks being less mobile than say, a magic-imbued character leaping through the sky, lends itself to this type of animation well.

Overall, this was quite delightful. The story is well-paced, the characters are fun, and the tank combat is interesting. It’s a shame only three of the six OVAs are complete and only one is out now in the UK, but it’s more than worth your time as a starting chapter for the finale. This gets a solid 4 out of 5 from me.