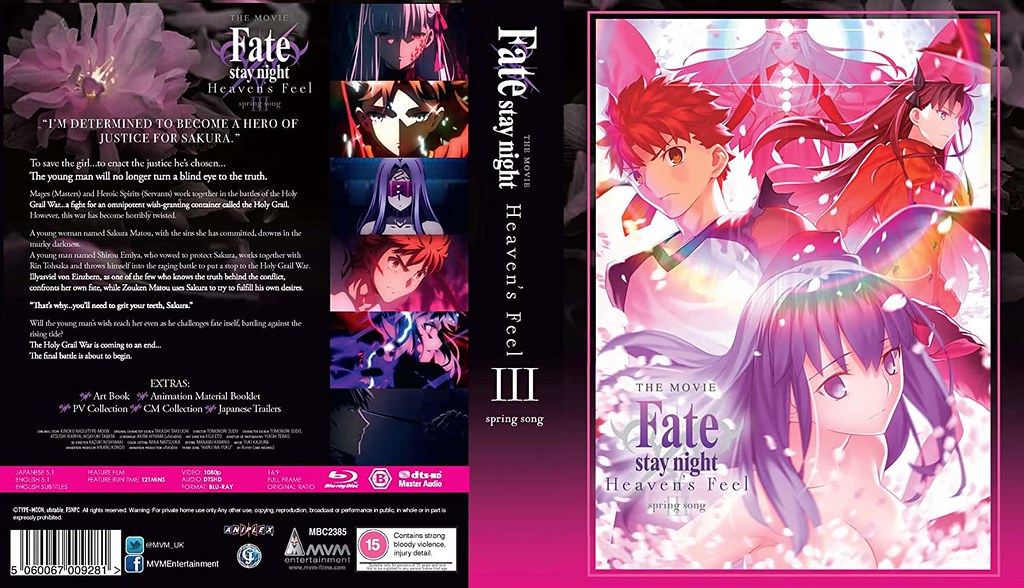 Mages (Masters) and Heroic Spirits (Servants) work together in the battles of the HolyGrail War…a fight for an omnipotent wish-granting container called the Holy Grail. However, this war has become horribly twisted. A young woman named Sakura Matou, with the sins she has committed, drowns in the murky darkness. A young man named Shirou Emiya, who vowed to protect Sakura, works together with Rin Tohsaka and throws himself into the raging battle to put a stop to the Holy Grail War.

Illyasviel von Einzbern, as one of the few who knows the truth behind the conflict, confronts her own fate, while Zouken Matou uses Sakura to try to fulfill his own desires. Will the young man’s wish reach her even as he challenges fate itself, battling against the rising tide? The Holy Grail War is coming to an end…The final battle is about to begin.

So, with this, the Heaven’s Feel film trilogy comes to an end. Now, this has been a series that I’ve really enjoyed. I scored Pressage Flower 4 out of 5, and Lost Butterfly 4.25 out of 5, after all. That means this had a lot to live up to. The good news is everything that made the first two films so special is still in place here. Yuki Kajiura’s score is absolutely wonderful, lifting the attached scenes the way a great soundtrack should. Meanwhile, ufotable continued to do a great job with the animation. All the flash is still here, and the more subtle touches that play with lighting are just as beautiful to look at. The studio does a really good job at blending 2D and 3D animation, and I would say it’s the strongest in the trilogy in that regard. Both the sub and dub cast are also on form here, meaning you’ll have a decent experience, whichever way you want to hear the characters.

Where the film manages to surprise is that the most impactful fight gives itself less opportunity for the over-the-top action we see more often. Being, essentially, a fistfight, it should feel out of place. There’s enough emotional impact there though that it works within the overall narrative. I was also happy to see the film deal with some of the more emotional story moments as well as it did. For me, this was far smoother than the previous films, and certainly less rushed than Pressage Flower was. Things do begin to tie together here, and certain characters, such as Sakura, get to shine brightly in that regard.

The downside is that the film does still suffer from some of the issues that have plagued the trilogy from the get-go. Without prior knowledge of the franchise, things get confusing. Even as someone who has spent more time with the franchise in more recent times, this still felt less accessible to me. Does that mean you can’t come into this as a newcomer? No, but you’ll certainly find it more of an aesthetic spectacle than anything else if you do. It should also be noted that when the animation has a rare drop in quality, it’s really noticeable when compared to the rest of the film.

Overall, I do feel that this continued the upward trajectory of the films. The great stuff is as great as ever, and the weaknesses, while still there, are lessened. This is a strong conclusion, and I give it a 4.5 out of 5.