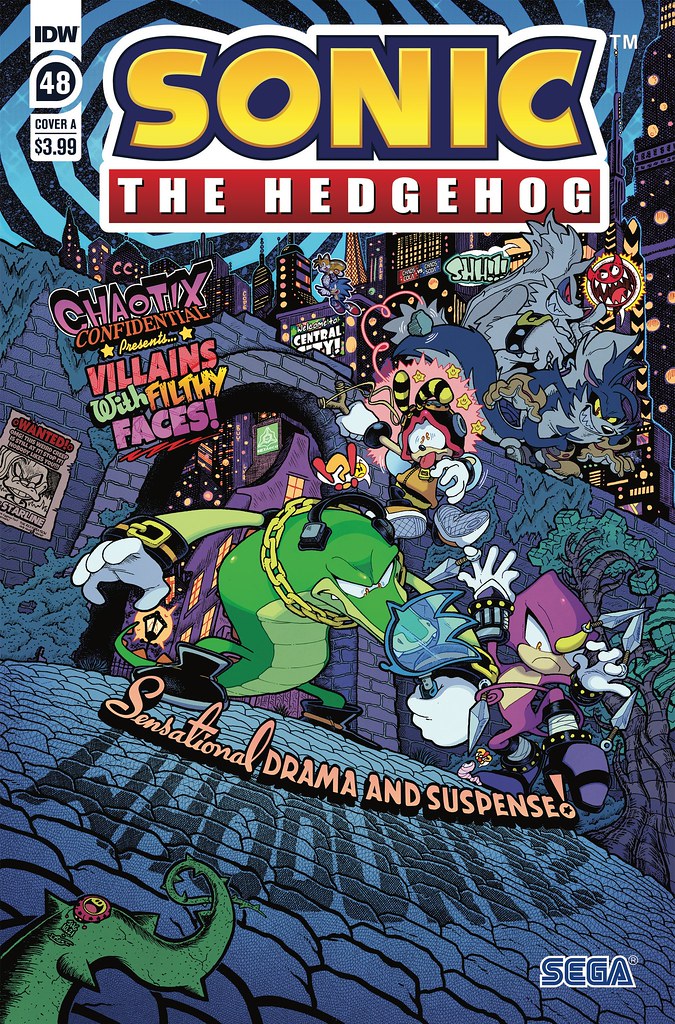 The ROAD TO #50 continues here! Enjoy a TEN-ISSUE-long adventure leading up to the EPIC SHOWDOWN in milestone issue #50.

The Chaotix are on the case! Central City has been turned upside-down by unmanageable traffic, and reports of lightning and water moving in odd ways have the city’s emergency services scratching their heads. Is it a sewer-dwelling crocodile, a pair of unruly brothers, or something more sinister? Whatever it may be, Vector, Espio, and Charmy are sure to uncover the truth

This was a fun issue for the franchise, and for a number of reasons. The first thing to note is that Charmy Bee is absolutely adorable here. The energetic little buzzer is all over the panels with a mass of cute expressions and exaggerated body language. Charmy’s innocence is delightful to read, and it all helps offset the more serious edge of Espio the Chameleon and gives Vector the Crocodile someone to play off for the comedic moments. Why Charmy is the only one without a ‘the’ between their name and their species though, I don’t know.

Moving on, the story is basically about the Chaotix Detective Agency exploring Central City and trying to figure out the cause of the recent chaos. From the trio flying Sonic Heroes style to an encounter with the comic equivalent of Crazy Carl from the Sonic Movie, there’s a lot of fun to be had.

It all builds up to a brief battle with Rough & Tumble, along with their new boss, Clutch the Opossum. Now, I’m happy to see Clutch make a return here. He was an interesting villain in Evan Stanley’s first arc as head writer. The thing that I found most interesting though was Espio threatening him with a bladed weapon. He literally held it to Clutch’s throat and then stuck it in his back. It was actually a lot more violent an image than I expected.

The art was excellent in this issue. As mentioned previously, Charmy is full of life visually. The others are no slouches in this department either though. The Chaotix crew bring some great visuals with them, and I can’t help but feel like that is in part due to their varied designs. Aaron and Reggie really know how to work with the trio’s bodies too, making the posing natural but nicely over the top. The usual great use of lighting is accompanied here by some old-school colour-focussed backgrounds among the more detailed stuff too.

Overall, this was a great, simple read. Charmy was adorable, and the team of Evan Stanley, Aaron Hammerstrom, and Reggie Graham made this a dynamic, fun issue. Well worth checking out, and it gets the full 5 out of 5 from me.