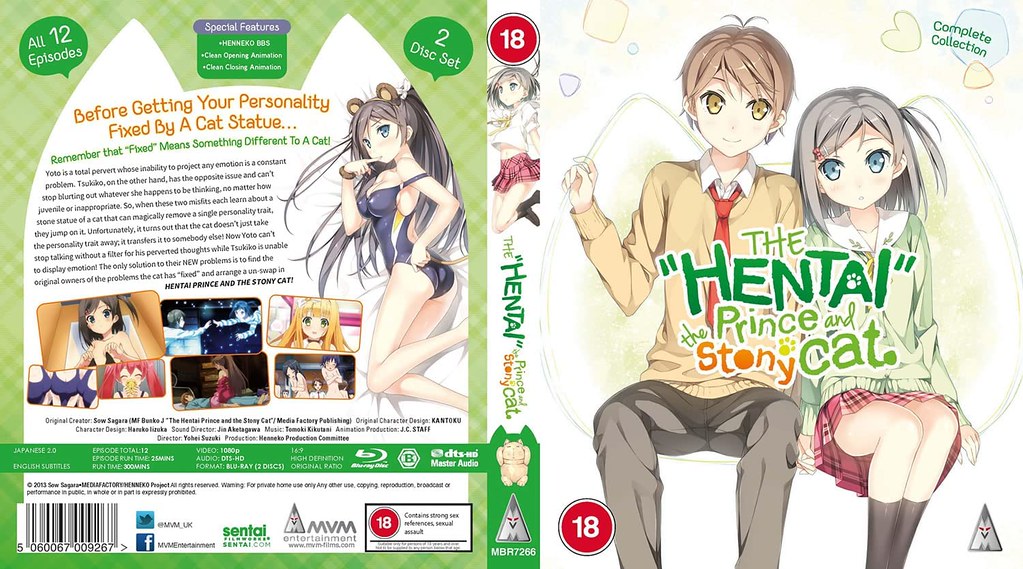 Title: The Hentai Prince and the Stony Cat
Anime Studio: J.C. Staff
Genre: Comedy / Harem
Yoto is a total pervert whose inability to project any emotion is a constant problem. Tsukiko, on the other hand, has the opposite issue and can’t stop blurting out whatever she happens to be thinking, no matter how juvenile or inappropriate. So, when these two misfits each learn about a stone statue of a cat that can magically remove a single personality trait, they jump on it. Unfortunately, it turns out that the cat doesn’t just take the personality trait away; it transfers it to somebody else! Now Yoto can’t stop talking without a filter for his perverted thoughts while Tsukiko is unable to display emotion! The only solution to their NEW problems is to find the original owners of the problems the cat has “fixed” and arrange a un-swap.

From an aesthetic standpoint, this is what you’d expect from J.C. Staff. It’s not as pretty as Amanchu! or Flying Witch, but it isn’t dire like Dai-Shogun – Great Revolution either. Instead, we have a visually fine show that fits nicely within the studio’s catalog. The voice cast does a decent job too, and the soundtrack is perfectly serviceable.

The problem I had is that it really felt like it should be more than it is. The concept itself is actually quite interesting, and the series does play with the idea of how important our traits are. It touches on heartbreak and plays out a soft romance. The supernatural elements escalate, leading to moments that could make it interestingly odd. The comedy is mixed but some of the jokes do land. The characters are mostly fine, even if some do feel like they just fit the template for specific types.

Despite all of this, the show felt like it was just there for me. It’s like it had all these decent ideas, executed them well enough, but it somehow fell flat anyway. It’s a strange show to experience in that way because it failed to grab me but always felt like it should to some extent. That makes it really hard to write too much about it because it does essentially come down to the show doing things mostly right but not really succeeding. That being said, HENNEKO didn’t make me want to turn it off, either. For that reason, I give this a 2.5 out of 5.