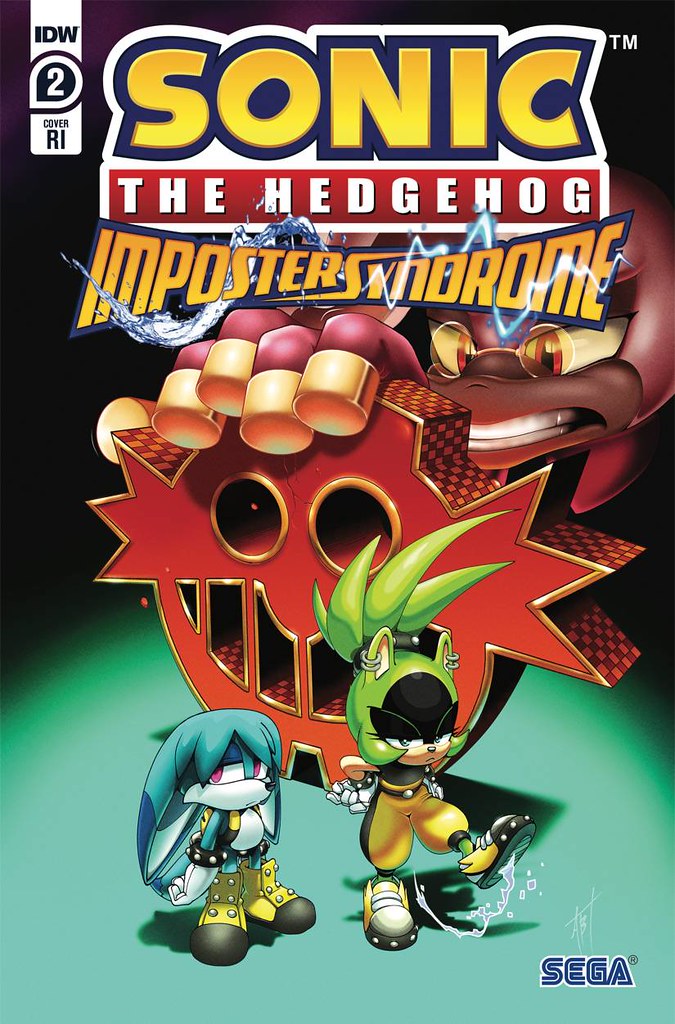 Surge and Kit are put to the test! Dr. Starline is almost ready to launch his grand plan, but first he must ensure his creations can perform under pressure. But more powerful doesn’t always mean better… can Surge and Kit live up to the heroes that inspired their creation?

The ROAD TO #50 continues here! Enjoy a TEN-ISSUE long adventure leading up to the EPIC SHOWDOWN in milestone issue #50.

In terms of covers, this is a mixed bunch for me. Cover A by Mauro Fonseca and Joana LaFuente features Kitsunami and Tails battling. I don’t know what it is about it, but it feels less polished to me. Gigi Dutreix’s cover B is better and is a high detail piece showing Surge, Kitsunami, and Dr. Starline. My favourite though is cover RI by Adam Bryce Thomas. You can see that above. The reference to Sonic 2 really makes it for me. Great stuff.

The internals have similar issues for me this month. There’s something about some of the panels that feels less polished than normal. I think it’s mostly Surge’s eyes. At times, they look a little off in terms of positioning. It’s a shame, because she’s actually super emotive at times, especially when cutting loose.

The action scenes show some of the best work of the issue for that exact reason, and Valentina’s colour work compliments it all well. The shading is really good, the key colours are vibrant, so what more could you want, really?

The story continues to be strong. Starline is clearly still hung up on Eggman and makes it clear here that a reunion is his overarching goal. The problem is, he’s so focused on surpassing his idol that he isn’t noticing the stuff going on around him.

Surge and Kitsunami are noticing things that seem wrong. Surge’s should-have-been-fatal moment here is the thing that’s really pushed her to look into things and she is very clear in what is going to happen: Starline is going to be in a world of hurt. Surge’s recklessness but determined nature and Kitsunami’s devotion to her are going to be the villain’s downfall, for sure.

So, how do I rate this one? Well, even with the visual issues, nothing was really terrible. The art at its best is really good, and I’m loving both the story and the characters. Surge is clearly the star of the show though. So, I’ll give this one a  solid 3.5 out of 5.