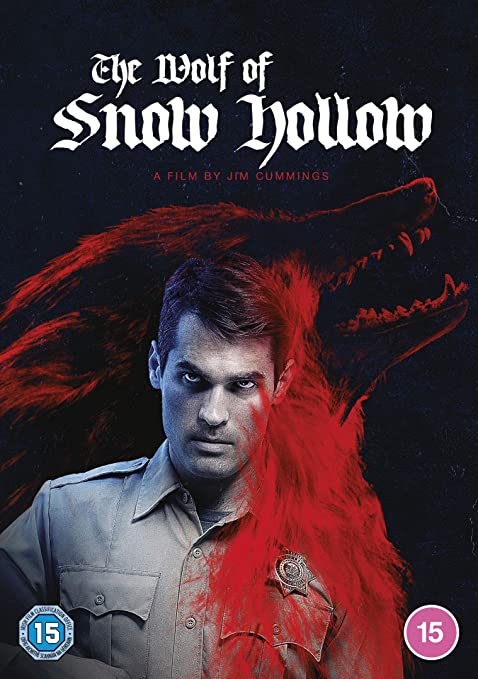 The Wolf of Snow Hollow is a 2020 comedy horror that was written by, directed by, and starring Jim Cummings. The story is simple: grisly murders are happening in a small town, and the police officer leading the investigation is an alcoholic with a lot of personal baggage. The question of whether it is or isn’t a werewolf committing the murders is raised, and it all builds up to a suitably violent final confrontation and a satisfying epilogue.

This was a film that I got as a Christmas present. Honestly, it’s one that I’ve wanted to see since catching the trailer a little while back. Now that I’ve watched it, I’m glad to say that it didn’t disappoint.

Starting with the comedy aspect of things, An American Werewolf in London was the first horror film that made me realise that laughs fit well with the genre. As was the case with that film, the comedy here is mostly on the dark side. In this instance, a lot of it revolves around our main protagonist, Joh Marhsall, going on rants fuelled by the intense stress he’s feeling. Whether these work as humour for you will depend on whether you can get past the concept of using personal trauma as a catalyst for laughs.

From my own standpoint, John’s rants were odd in that they didn’t always raise a smile but did serve to make him sympathetic. You could see him falling apart as things spiraled and, honestly, even when he was being an arse, it made you want to see him pull out of it. The other gags landed more consistently, and in particular, there’s an excellent slapstick fall involving a low oven door that looked super painful but was just perfect in execution.

While the comedy came more frequently than it did in the aforementioned American Werewolf, the Wolf of Snow Hollow is absolutely a horror film at heart though. The kills are not as in your face as the more brazen examples you can find, and the aftermath is left to the imagination, but there’s enough on screen to satisfy those that want some brutality with their horror. Nobody is safe either with the wolf targeting women and girls of a mix of ages. The werewolf costume too is well worth mentioning; it looks really good on screen and hits the sweet spot of being used enough to create impact without stepping into being seen so much it lessens the effect.

The key characters are a fine bunch. As I said, John is relatively sympathetic despite his actions. His father, the aging Sheriff Hadley is played excellently by Robert Forster, who sadly passed shortly after completing the film. Meanwhile, Riki Lindhome, who has appeared in everything from Buffy The Vampire Slayer to The Gilmore Girls and The Big Band Theory, is also very good as Officer Julia Robson. She’s more grounded than her male colleagues and is a great foil for John.

The various victims are not given huge amounts of screen time. Interestingly though, they do all get moments to introduce themselves on a base level, and the effect is such that you do feel them. They’re all nice people, and even when their death is then obviously coming, you do still end up liking them. Meanwhile, the story itself is strong, if not entirely unusual. This is definitely more of a whodunit werewolf tale than cursed protagonist one, and the mystery side of it plays out well. We even get a nice little twist at the end.

Overall, I really enjoyed this one. It’s an interesting take on the werewolf genre that’s darkly funny, suitably brutal, and at 84 minutes, doesn’t outstay its welcome. I give this a solid  4 out of 5.

One thought on “The Wolf of Snow Hollow [Film Review]”