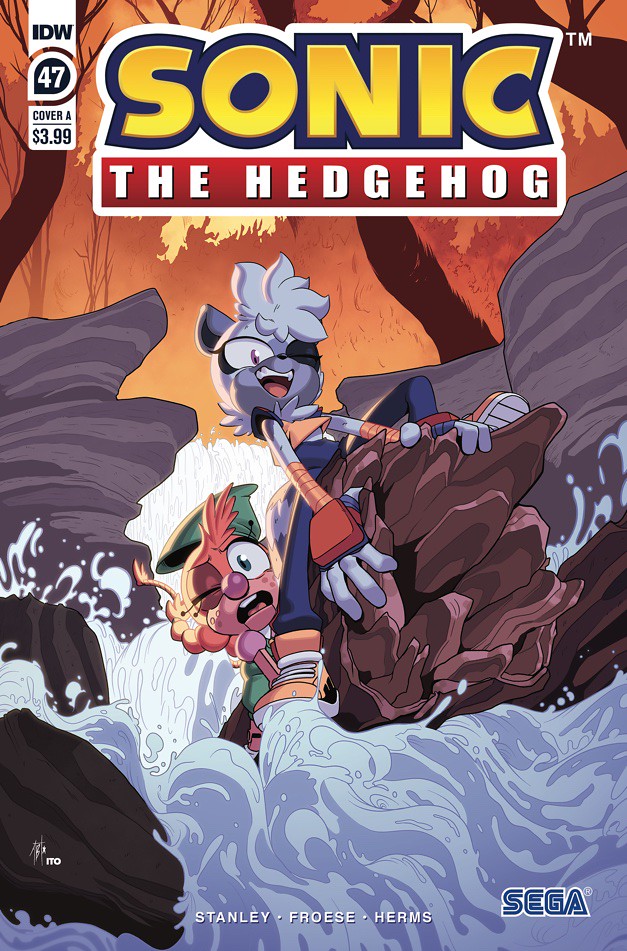 The ROAD TO #50 continues here! Enjoy a TEN-ISSUE-long adventure leading up to the EPIC SHOWDOWN in milestone issue #50.

Amy, Tangle, Jewel, and Belle’s peaceful camping trip is still up in flames… literally. The fire is blazing but all the tension from before has melted away and the heroines are ready to save the day! Plus, being confronted with such danger has some reevaluating their futures… Find out more in the final part of “Trial by Fire”!

With this issue, we’ve reached the end of the forest fire/girls’ vacation arc, and honestly, it’s a pretty good finale for the tale. In terms of covers, Cover A by Adam Bryce and Leonardo Ito is my favourite. Depicting Tangle and Belle on their forced white water adventure, it gives you a good taster for how the issue starts. Meanwhile, Cover B by Natalie Haines is a striking piece featuring the evacuation as the forest fire spreads. It has a nice pencil-like feel to the colouring and makes great use of the flames for lighting. Finally, cover RI by Nathalie Fourdraine is as pretty as her covers usually are, but I would say that it isn’t quite tonally coherent with the issue.

Evan Stanley was on story and art duty on this issue, and she has plenty of opportunities to show why she’s a fan favourite artist here. Her characters remain super-emotive facially, striking a good balance between the over-the-top cartoony style you’d expect from a Sonic comic with some real emotion behind the key moments. It’s all complimented nicely by the thick outlines, which go a long way to setting the characters apart from the scenery. Meanwhile, Matt Herms is in fine form with the colour work too/Here, he’s kept the shading on the characters simple, but the darker tones are well placed to add depth. Really, art-wise, the only thing that didn’t work for me was a single panel towards the end. We get a shot of some bootprints in the ground and they just look a little flat to me. A little bit of shading would have made them look less like they were just slapped on top of the ground, but with that being the only issue, I’d say this is a great release for the artwork as a whole.

When it comes to the story, Evan has done a  good job of letting this one build. The danger ramped up in the last issue, and we’re dropped straight back into it here. Tangle and belle got to bond a little with the woodentop robot having a chance to show some strength, while also helping Tangle realise that not everyone is as self-assured as she is. Once the full team was reunited, they got to work on getting the flames under control too, with Jewel finally taking the lead in the mission. It all played out at pace but didn’t feel rushed, so that’s a definite win there.

The issue also set up a few things for future issues. For one, Tangle sort of quits the Restoration and starts off on a journey to find Whisper. Meanwhile, we also see the park ranger find evidence that the fire wasn’t an accident, leading us to a shot of the Chaotix Detective Agency. Obviously, this means we’re spending some time with Vector, Charmy, and Espio next.  What was interesting though was that Vector was reading a newspaper with the headline ‘Strange Attack On City’. We already know from Imposter Syndrome Issue 1 that Dr. Starline is behind this, with his would-be replacements for Sonic and Tails pulling off the crimes. This all clearly points to people being suspicious, meaning Starline may be underestimating the effectiveness of his strategy here. We shall see though.

Overall, this was a quick, easy read. The story reached a satisfying conclusion and sowed seeds for what’s to come. The characters remained strong in their individual roles while getting little steps of growth as it went along, and the art was great. This gets another 5 out of 5 from me.