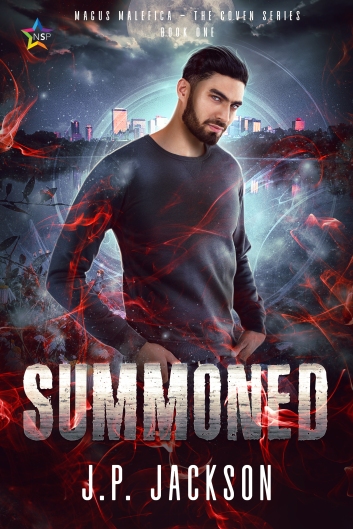 Devid Khandelwal desperately wants to experience the supernatural. After years of studying everything from crystals to tarot to spellcasting, nothing has happened that would tell him the Shadow Realm is real. And that kills Dev. As a last-ditch resort, he purchases a summoning board, an occult tool that will grant him his ultimate desires.

Cameron Habersham is Dev’s best friend. Cam loves Dev like a brother and will do anything for him, as long as he looks good doing it. So when Dev asks him to perform the summoning board’s ritual, he reluctantly agrees, but he knows nothing will come of it. Nothing ever does.

However, within a day, Dev and Cam’s lives are turned upside down as wishes begin to come true. They discover the existence of a supernatural world beyond their imagination, but peace between the species is tenuous at best.

Dev finally gets to see the Shadow Realm, meets the man of his dreams, and is inducted into the local male coven. But for all the desires that were summoned into existence, Dev soon realizes the magical community dances the line between good and evil, and Cam ends up on the wrong side of everything.

The old adage is true: Be careful what you wish for.

Long-time readers on Matt Doyle Media will be aware that I have enjoyed J.P. Jackson’s work so far, with both Daimonion and Magic or Die scoring highly. Much like with those titles, what we have here is a dark urban fantasy title with LGBTQ protagonists. That all being said, this one actually starts off with a fairly light feel.

Dev is desperate to find proof that magic exists; it’s a world he truly wants to be a part of, and we join him as he prepares for one last attempt at finding just that. As you’d expect, things change for our hero from there. Though I didn’t find him quite as endearing as James Martin in Magic or Die, Devi is an easy protagonist to get behind. We all want to find some magic in our lives, I’m sure, it’s just very literal for him. Equally, his journey to embrace his own sexuality is also a good one. He isn’t struggling to understand his orientation, he understands that well, but rather. It’s a story about him trying to find the happiness he wants with it.

As secondary protagonists, we have Dev’s best friend Cameron, and his eventual partner in the Shadow Realm, Tully. Both are likable foils for Dev, offering different views and world experiences that serve to contrast Dev’s and help him grow. Both are intrinsically linked to the magical worldbuilding too, and that is where this book really shines. JP Jackson has always been really good at this aspect of storytelling, and his love of the supernatural is in full force here. There’s clearly been a lot of time and effort put into ensuring that the magical realm feels balanced, and the different species therein have an interlinked social system. Those species are interesting too, bringing in witches, werewolves, and the fae.

Now, I’m a big werewolf fan. What struck me as interesting here is that said monster wasn’t used in the normal way they are in Urban Fantasy. If anything, I’d say that werewolves lean more into the realm of traditional horror – it’s very much a curse – while still retaining some of the more human characteristics you find in UF werewolves. In particular, there’s a scene towards the end that is rather brutal, and that impressed me a lot.

The story itself is a quick read, though it’s worth noting that things play out slowly for the most part. It works well here, and makes it fell very natural. There are a fair few sex scenes in this release too, so that’s something to be aware of if MM erotica makes or breaks a story for you. For me, I’m not a big erotica reader, so can’t really judge the quality. I will say though that they felt like they popped up naturally, ands weren’t just shoehorned in.

Overall, I’d say this was a great release by JP Jackson. Better than Daimonion but not quite on par with Magic or Die for me, it features a likable cast and a fun tale with a dark edge. This gets a solid 4 out of 5 from me.