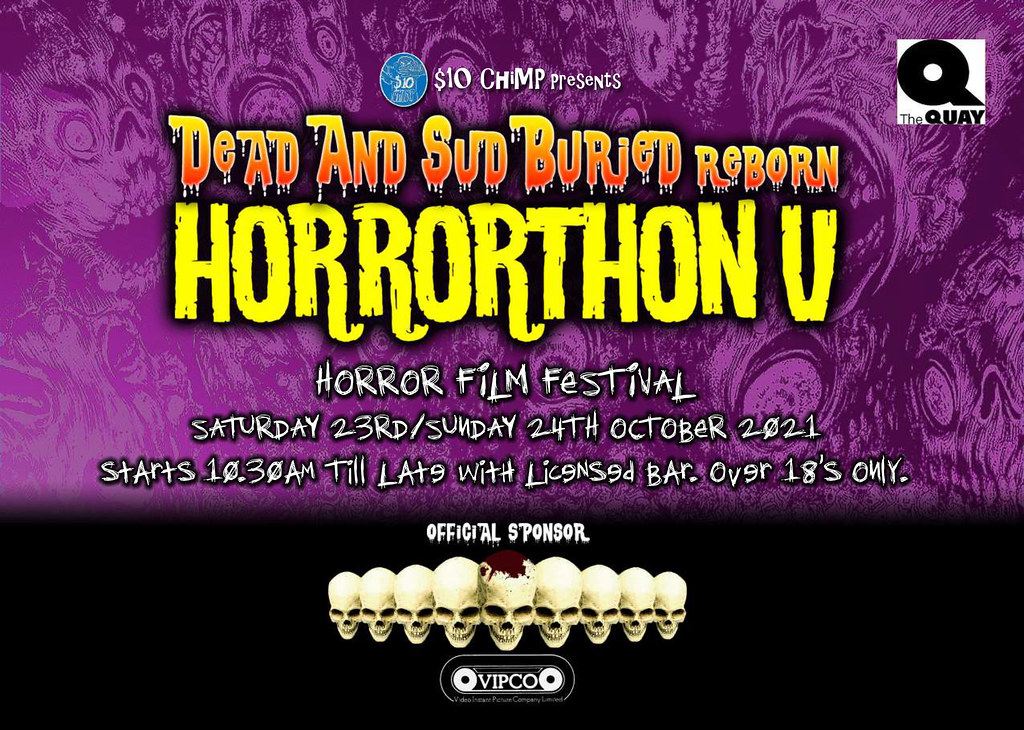 This year’s Dead And SudBuried, an annual event in Sudbury, Suffolk is making the big jump from a single day of classic horror movies to become a fully-fledged horror film festival over two days featuring 7 classic horror movies, 7 brand new horror movies including two UK premieres, 24 horror shorts from all around the world plus live director Q&A’s, licensed bar and much more adding up to something like 30 hours of horror over one weekend.

The Dead And SudBuried Horrorthon began life in 2016 in darkest Suffolk in the small market town of Sudbury as a celebration of classic horror movies. Over a single day, seven classics were thrown back on the big screen in the intimate venue of The Quay Theatre. Taking place in a town without an actual cinema to fulfil a dream to see classic movies on a big screen, the first Horrorthon was planned around an organiser’s birthday, so just in case it failed to bring enough obsessive horror fans to sit and watch non-stop horror all day long, the event could be written off as an expensive birthday present! Fortunately, a small but perfectly formed crowd came, enjoyed and endured over 13 hours of wonderful motion pictures like The Exorcist, An American Werewolf In London, The Thing and Evil Dead 2.

The first Horrorthon didn’t lose quite enough money, so returned in 2017 bombarding a bigger crowd with such classics as Dawn Of The Dead, The Omen, A Nightmare On Elm Street and classic horror trailers between movies. In 2018, the event skipped six months to a more fitting and permanent Halloween weekend, building on an established crowd/family and adding magazine and Blu-ray giveaways. The last live event in 2019 was the biggest year to date with an even bigger crowd, more giveaways and discounts from local businesses for food and hotels.

Dead And SudBuried Reborn would have returned in 2020, planning to expand to two days and include brand new movies but the event was sadly postponed due to the Corona virus and forced online as Virtually Dead And SudBuried: Horrorthon At Home featuring 14 brand new horror movies including the critically acclaimed A Ghost Waits, Hail To The Deadites, Chestersberg, Death Ranch and more.

Finally, twelve months later than expected, Dead And SudBuried ReBorn returns to The Quay Theatre, bigger and better in every way, resurrecting and re-inventing itself with 24 brand new horror shorts, selected to complement the film they precede, 7 brand new independent horror features fresh from the festival circuit including 2 UK premieres and four live director Q&A’s after the screenings plus the trademark 7 classic horror movies! Starting at 10.30am and running through each day, that adds up to nearly 30 ridiculous hours of horror fun from 38 movies and over 2 whole days. 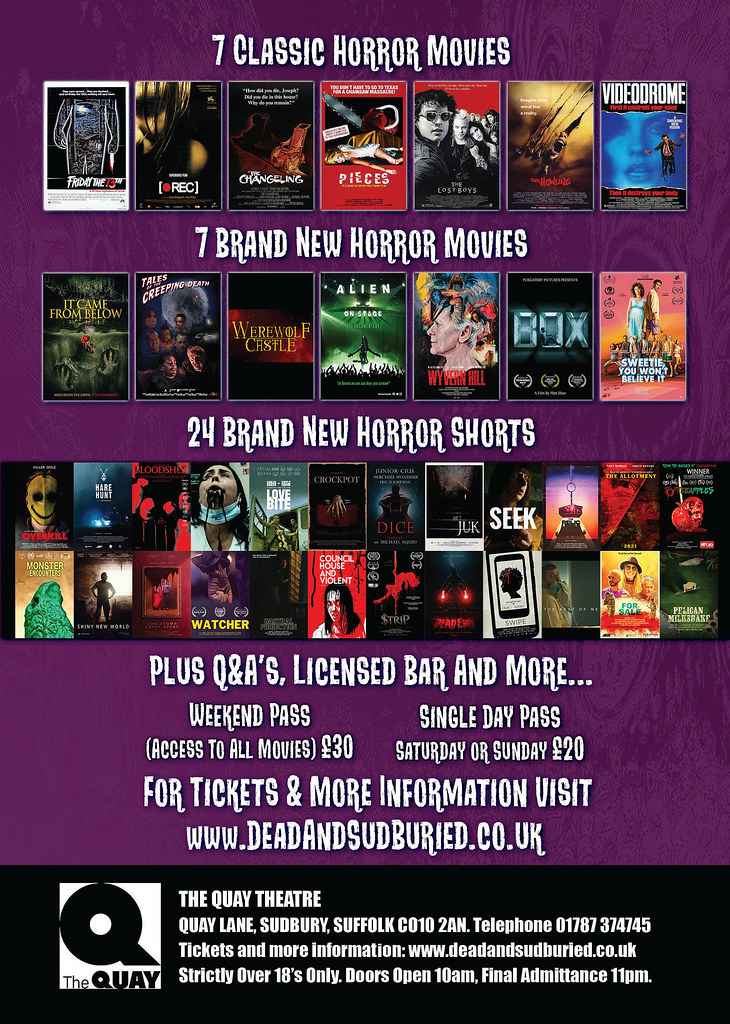 The classic horrors are made up of the original Friday The 13th, 80’s glossy vampire The Lost Boys, arguably the second best werewolf movie ever made, The Howling, David Cronenberg’s body horror Videodrome, the ridiculous slasher nasty Pieces, found footage zombie-esque [REC] and haunted house chiller The Changeling. The brand new features comprise of premieres of Charlie Steeds’ Werewolf Castle and claustrophobic creature feature It Came From Below, plus serial killer chiller Wyvern Hill, the claustrophobic Box, quirky anthology pic Tales Of The Creeping Death, the internationally acclaimed Sweetie, You Won’t Believe It and inspiring feel good documentary Alien On Stage. The 24 horror shorts accompanying the features come from all over the world, many having played at the most prestigious international horror film festivals. More surprises are planned for the weekend including a book signing from extreme horror filmmaker and author Matt Shaw.

”We believe movies should be seen on a big screen with big sound and a crowd to be truly experienced which is the real reason the Horrorthon comes back every year!” says organiser Andy Piper, “As we finally move into our fifth year, it’s become clear that our dedicated crowd is not only hungry for classic horror but they want new horror too, which is why we’re growing to a fully-fledged two day horror film festival. We want to continue to screen rarely seen, classic horror alongside brand new feature length movies and shorts so that we keep on growing and become a major horror event for East Anglia.”

“We try and cram in as much horror as possible over the weekend, you don’t have to watch everything and we won’t hold it against you if you leave early, start late or skip a movie in favour of a proper sit down meal outside the building! The licensed bar with snacks will be open from the start of the first movie to the start of the last each day and we’ve provided start and end times for every block so you can plan a take-away delivery to the venue or bring your own food. We can’t guarantee you’ll love every movie on the bill but there should be something for pretty much everybody!”