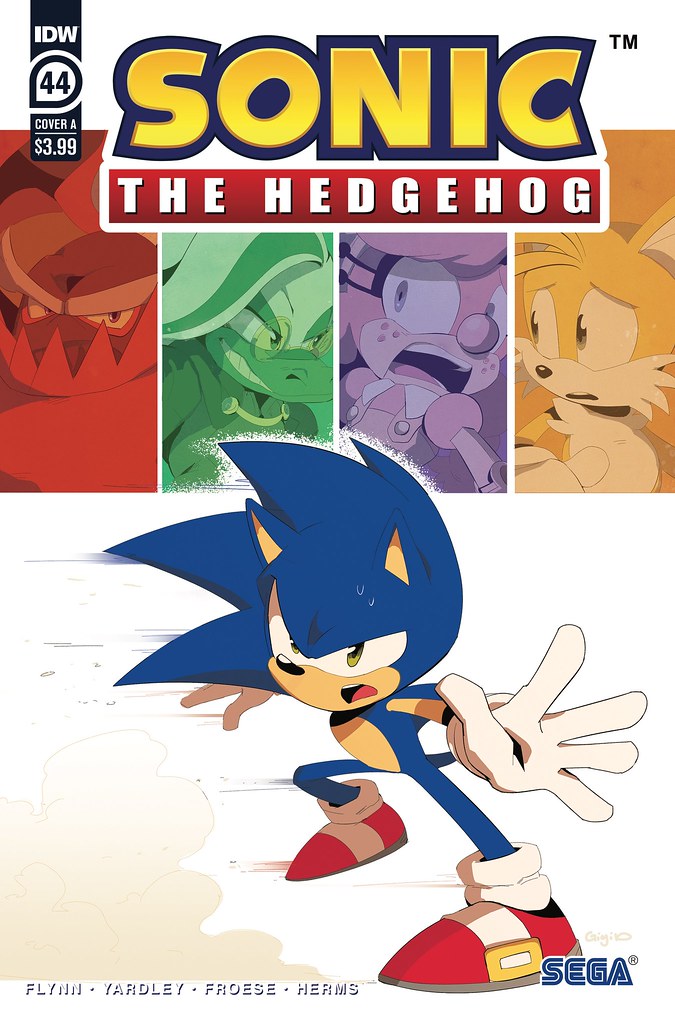 MISSING: Belle the Tinkerer―doll-like look, blue eyes, made of wood, usually wears a green hat, and is known for being clumsy

The search for Belle begins! Sonic and the Chaotix search far and wide for their new friend as she fights to escape. But will that be enough, or have the bad guys already won…? And where have the Zeti gone? Find out the conclusion to “Zeti Hunt”!

So, starting with the covers, the three available for this issue are all pretty great. Cover A by Gigi Dutreix is my favourite. It actually feels a little like promo art for a band to me. In fact, I’m certain I’ve seen something similar a few times over the years covering upcoming albums. Meanwhile, cover B by Jamal Peppers is a nice hit towards what we see in the issue. Finally, cover RI by Nathalie Fourdraine is a nice, colourful shot of what could have been.

The internal art is interesting insofar as it’s all very dark this issue. The outdoor shots that start the issue are almost foreshadowing the tone of the issue as a whole, I think. Once we join Dr. Starline in his lab with Belle the Tinkerer, it’s a wonderful mix of a muted setting with atmospheric lighting. The bursts of stark colour only come during times that Belle is angry, which is a nice touch, I thought. On top of all of this, the facial expressions of the nefarious Starline paint him as truly evil at times, with a far bigger malicious streak than previously shown. We don’t’ actually see any real daylight until the closing panel where the sun finally begins to rise after the events that have unfurled over the last story arc. It’s all far more subtle a piece of visual storytelling than you may expect from a Sonic the Hedgehog comic.

The story is bookended by the Zeti, first being sent away after their recent defeat, and then them landing on their homeworld of Lost Hex, vowing to return even more ruthless than ever. It’s a decent way to both end their current story and set them up for a return down the line. The brunt of the issue though dealt with Starline experimenting on Belle. That’s literal too. When we first find them, he has Belle’s head open as he fiddles with her internals. It’s actually fairly gruesome, even with her being a robot.

The main thing we learn here is that Dr. Starline is very clinical in how he views artificial life. No matter how real Belle comes across, he sees her as an ingenious machine that he can learn from and replicate. Meanwhile, we also get to see what Dr. Eggman was like ad Mister Tinker and find out how Belle was treated when he returned to his villainous roots. The rescue by the Chaotix was short but far more effective than the longer battle of the last issue, and it did a good job of showing them to be heroes while still making Starline’s new tech-infused strength clear.

This was, overall, an excellent issue for storytelling. We got backstory, we got action, awe got the continued rise of a villain, and we got the end of the Zeti arc. This one was a big step up, and I am happy to give it the full 5 out of 5.