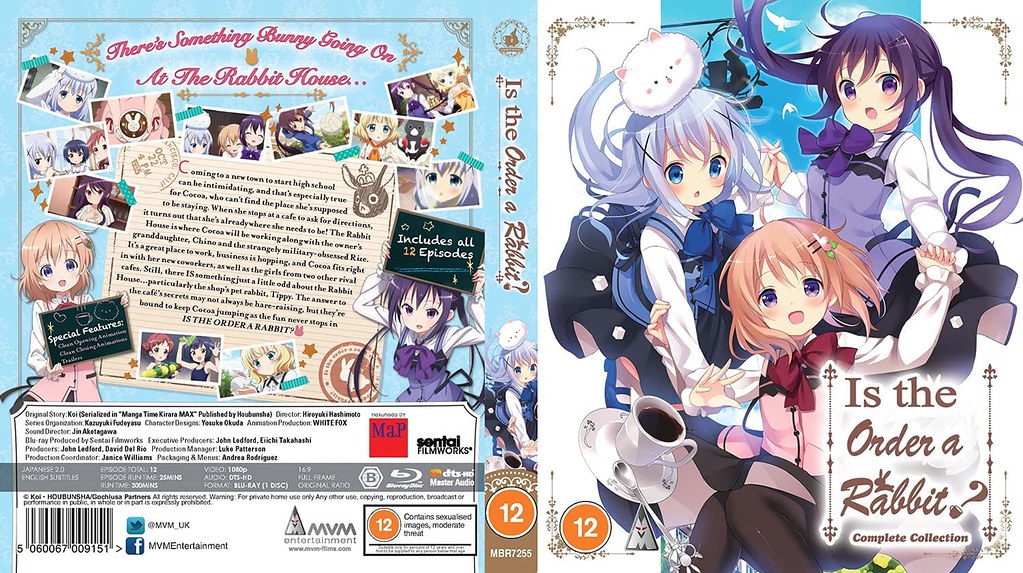 Title: Is The Order A Rabbit?
Anime Studio: White Fox
Genre: Comedy / Slice of Life
Coming to a new town to start high school can be intimidating, and that’s especially true for Cocoa, who can’t find the place she’s supposed to be staying. When she stops at a cafe to ask for directions, it turns out that she’s already where she needs to be! The Rabbit House is where Cocoa will be working along with the owner’s granddaughter, Chino and the strangely military-obsessed Rize. It’s a great place to work, business is hopping, and Cocoa fits right in with her new coworkers, as well as the girls from two other rival cafes. Still, there IS something just a little odd about the Rabbit House…particularly the shop’s pet rabbit, Tippy. The answer to the café’s secrets may not always be hare-raising, but they’re bound to keep Cocoa jumping as the fun never stops.

This series is based on the ongoing four-panel manga by Koi, currently being published in Hobunsha’s Manga Time Kirara Max. The first season of the anime – which comprises this collection – first aired in 2014. It’s produced by White Fox who have worked on a plethora of well-known titles, including Jormungand, The Devil is a Part-Timer, Akame ga Kill, Re:Zero – Starting Life in Another World, Steins;Gate, Steins;Gate Zero, Goblin Slayer, and Girls’ Last Tour.

With that sort of pedigree, you may well expect the series to be quite a nice one to look at. In that regard, you won’t be disappointed. The background work in particular is beautifully crafted, with the detailing on the European-style housing being a real stand-out. The characters too move well, mixing standard movements and faces with some suitably exaggerated moments thrown in at appropriate times.

As you would expect for this type of show, the opening and ending themes are performed by the voice cast, and they do a good job with these. This is echoed in the actual episodes, as the VAs in this single language release are in fine form throughout the twelve episodes.

When it comes to the actual story, this isn’t so much a long-running tale, but more of a series of moe moments of varying length. It certainly has a charm to it though. The characters mostly fit into the standard stereotypes, but with enough of a twist to avoid feeling over-familiar. On the whole, the jokes land too, and it even avoids leaning too far into unnecessarily over-sexualising the characters.

That all being said, the show isn’t without flaws. I remain confused by Tippy, the angora rabbit that is also the reincarnation of Chino’s grandfather. This confusion stems entirely from him looking more like a cat than a rabbit. Even when you think of him as being drawn in a stylised way, it’s still really off when compared to the attention to detail that went into the backgrounds and other characters.

You could also argue that this is a very bare-bones release from MVM. The full run is held on one Bluray disc with the extras amounting to nothing more than clean themes and some trailers. In a way, this kinda fits though. The show itself is fairly simple, so a simple release makes sense.

Overall, Is The Order A Rabbit? is a charming little slice of life release full of cute moments, good humour, and some nice aesthetics. It’s not on par with some of my favourites in the genre, such as Amanchu! or Flying Witch, but it hits the mark better than Chidori RSC. As such, I give this a solid 3.5 out of 5 and look forward to seeing if we get the second season too.