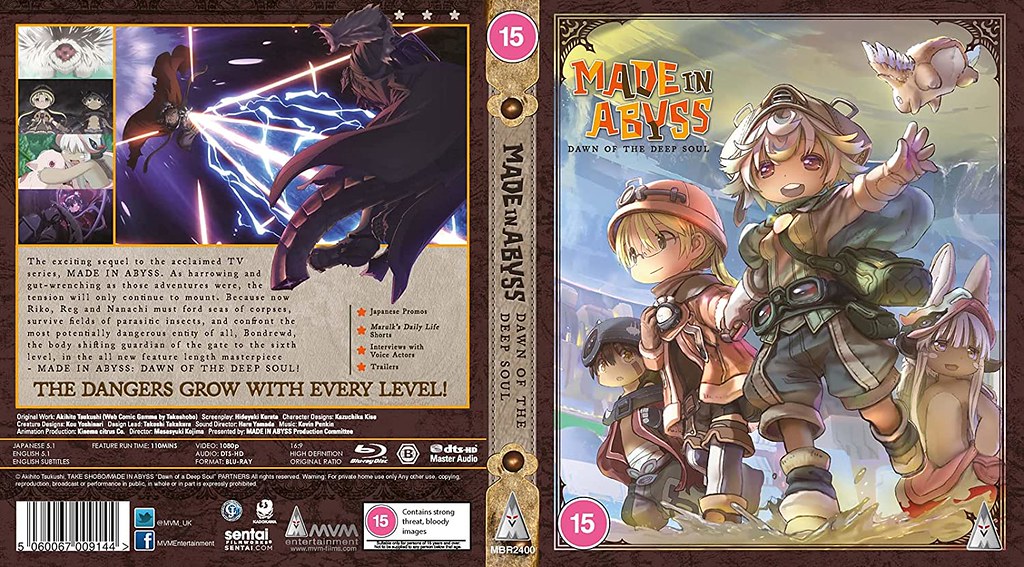 Title: Made In Abyss: Dawn Of The Deep Soul
Anime Studio: Kinema Citrus
Genre: Adventure / Dark Fantasy / Sci-Fi
The exciting sequel to the acclaimed TV series, MADE IN ABYSS.
As harrowing and gut-wrenching as those adventures were, the tension will only continue to mount. Because now Riko, Reg and Nanachi must ford seas of corpses, survive fields of parasitic insects, and confront the most potentially dangerous entity of all, Bondrewd, the body shifting guardian of the gate to the sixth level, in the all new feature length masterpiece – MADE IN ABYSS: DAWN OF THE DEEP SOUL!

If you saw my review for the series this film follows, you’ll know I thoroughly enjoyed the release. So, for things to pick up where we loft was lovely to see. In many respects, a lot of what I said there stands here too. Aesthetically, the series has a wonderful sense of balance to it. The character designs are simple, yet effective, and sit nicely against the higher detailed backgrounds. They are every bit as emotive here as they are in the main series, but with a movie budget sheen to them. I’d say that this film is if anything, smoother in terms of animation, which is wonderful when you consider the quality of the core series. The soundtrack too shines again, with each piece fitting its attached scene perfectly. Throw in some more strong performances from both the original and dub voice cast and things are sounding great!

The story, somehow, manages to take the darkness of the series and make it worse. Right the get-go, we’re thrown headlong into some dark concepts with the bugs that eat you from the inside out. With Nanachi set to face a dark figure from her past too, there is never any doubt that things are going to get rough. Where this tops the series is in the brutality of it all. Child torture is present here, and it’s an important part of the narrative. It culminates in a scene that you see from the point of view of one of the characters – and I mean complete with blinking eyes to make it clear – that honestly makes me feel a little ill.

This all serves a purpose though. Yes, it’s entirely uncomfortable to watch, but it fits so snuggly into the plot, that you instinctually try to roll with it. It adds some extra points to the big, final battle too. Not only is said action scene beautifully animated, but we now know what’s at stake. In that respect, while it would be fair to say that the story beats are a little predictable, it builds itself well enough for it to not be an issue. Things escalate logically and it keeps you paying attention with ease.

In terms of potential issues, the graphic nature of things will certainly put some off. I really, really wish they wouldn’t start talking about Reg’s genitalia either. It’s completely unnecessary. Outside that though, this is more of the same and should satisfy fans of the series.

Overall, I thought Dawn of the Deep Soul was an excellent addition to the story. It’s aesthetically beautiful, brutal in a suitable way, and more than a little uncomfortable to watch. I give this a solid 4 out of 5.