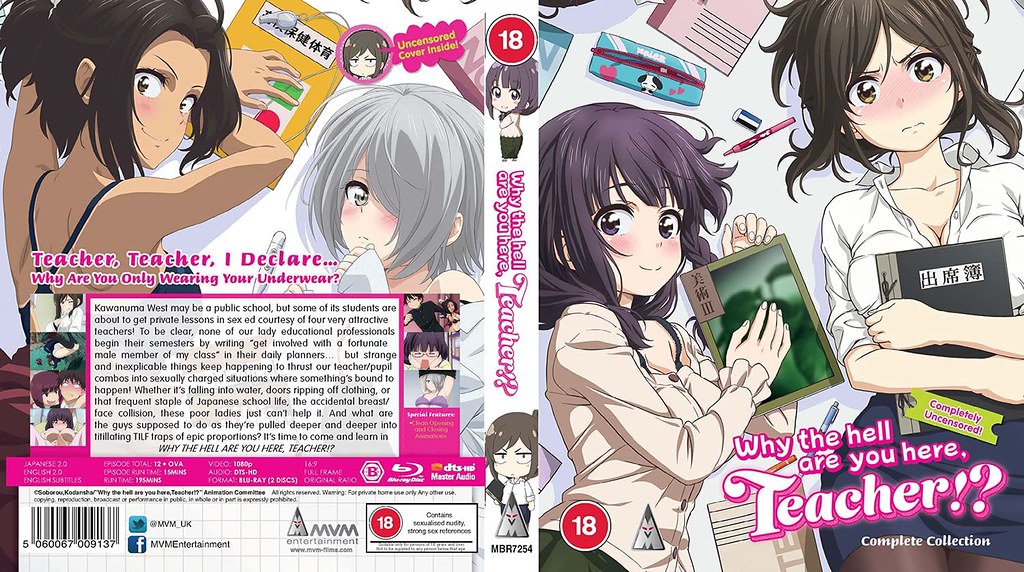 Kawanuma West may be a public school, but some of its students are about to get private lessons in sex ed courtesy of four very attractive teachers! To be clear, none of our lady educational professionals begin their semesters by writing “get involved with a fortunate male member of my class” in their daily planners… but strange and inexplicable things keep happening to thrust our teacher/pupil combos into sexually charged situations where something’s bound to happen! Whether it’s falling into water, doors ripping off clothing, or that frequent staple of Japanese school life, the accidental breast/face collision, these poor ladies just can’t help it. And what are the guys supposed to do as they’re pulled deeper and deeper into titillating TILF traps of epic proportions? It’s time to come and learn in WHY THE HELL ARE YOU HERE, TEACHER!?

Before I get into anything else, I want to start with the aesthetics of this one. Visually, the anime is fairly decent. The character designs aren’t anything out of the ordinary, but the animation is smooth enough. The animation team are also perfectly capable of drawing the things this show focuses on. You know, nipples, butts, boobs, and their various movements. Given that Tear Studio haven’t had too many releases (their back catalogue bar this is comprised of the Lord of Vermillion: The Crimson King series, The Royal Tutor movie, and the Fragtime OVA), it’s impressive enough for what it is. There isn’t anything that’s going to stand out as particularly beautiful, but it likely won’t pop up on any worst animation lists either. I will also give some praise to the ending video altering depending on the focal couple of the episode.

The opening theme, Bon Kyu – Bon wa Kare no Mono by Sumire Uesaka (who has appeared in everything from Love, Chunibyo & Other Delusions to Yakuza: Like A Dragon) is a wonderfully catchy piece. The closing theme Ringo-iro Memories, which is performed by the female cast, is pretty go for what it is too. While the background OST is relatively forgettable, the voice cast in both the subbed and dubbed versions is strong. Honestly, they all seem to be really into it, which gives the series a nice little boost.

Moving on to the story itself, if you read my review of Domestic Girlfriend, you’ll know that the primary theme of this one is one that I don’t like. The whole teacher x student thing really rubs me up the wrong way, and when the students are teenagers, it comes off worse in my eyes. That one of the students here doesn’t even have the defence of being above the age of consent adds yet another layer to that. And don’t get me wrong, I’m glad that we saw ‘we can’t do anything until you graduate’ being used as part of the story (though it wasn’t in all cases), but this isn’t enough to drag this up for me.

The series is listed as a comedy, and how well it does in that respect will depend on your love of certain jokes. There are a lot of the usual suspects present, like the accidental-face-in boobs, unfortunate wet clothes moments, and getting stuck in a position that means another character can’t help but see the other’s underwear. The titular gag works well in the primary pairing’s case, because they really do seem to bump into each other in unexpected places. The other gags though are overused to the point that what little humour they no doubt have for some viewers, begins to wear down.

For me, it was hard to put aside the constant humiliation of the women too. I wasn’t entirely fond of them, entirely due to their romantic interest in students, but it still grated to see the positions they constantly ended up in. This is all supposed to be part of the comedy, after all, but it’s just not funny to me.

Why The Hell Are You Here, Teacher!? is an anime series about a school that needs a better vetting process for its staff. The production values are fine, the cast is excellent, but the humour is firmly in the not-for-me category. It lacks the realism that acted as redeeming feature for Domestic Girlfriend, instead burying itself in its themes. It knows what it is, and it doesn’t try to deviate from that. For me, it barely warrants a 2 out of 5.

8 thoughts on “Why The Hell Are You Here, Teacher!? [Anime Review]”