Title: A Scheme of Sorcery

Palace squire Edwynne Dovecote has discovered her life is a lie. She wasn’t born into the nobility- she’s a daughter of the North, an inhospitable country where people worship a mysterious goddess. Even if it puts her at odds with her adopted family, she’s determined to explore her heritage, as long as no one finds out who she truly is.

But Sariva al-Beroth, an ambitious Northern girl who’s started working for the queen, is sick of rude outsiders gawking at her culture. She refuses to be in the same room as Edwynne, let alone share ancestral secrets.

Then the queen falls under a curse, and only Sariva and Edwynne can rescue her. To save their country, they’ll have to survive a ruined underground castle infested with ghosts, a fascist uprising prepared to sway public opinion with mind-control magic… and each other.

A Scheme of Sorcery
Ennis Rook Bashe © 2021
All Rights Reserved

Sariva couldn’t finish the beaded bag before her caravan reached the castle, so she tidied away her supplies and peeked out the carriage window. “Are we—”

“Don’t worry, miss, we’re not going past the haunted ruins.”

Strange. She’d only wanted to know when they’d arrive.

The carriage rolled over uneven streets made of pale mountain stone, passing low whitewashed houses with flat-eared cats on their doorsteps. The scent of daffodils and cyclamen filled the air as distant silver bells rang, calling people to pray to the sky. Even without the bag completed, her outfit seemed presentable. Everyone who noticed her would believe she belonged. Did she appear marriageable though? She touched the swirl of her plaits. Her rhinestone hairpins still held. Would anyone be able to tell how she’d altered her mother’s old dress? Would they think of her as resourceful or unfashionable? Shining gates swiveled open, presenting a terraced courtyard, a burbling fountain, and tall palm trees in painted pots. As the carriage driver halted his bay roans, she rubbed her heirloom moon pendant for reassurance as her mother had so often done.

A slender woman with warm-olive skin hurried across the courtyard, sandals pattering on the stone. She bobbed a curtsy and shook Sariva’s hand in both of hers. “So pleased to finally meet you. I’ve had the honor of reviewing your list of qualifications and your letters of recommendation—we’ve all agreed you’d be a lovely addition to the queen’s service. Lady Ava of Valency, and you are Lady…Broth, is it?”

“Sorry, it’s Be-roth.” No one ever got her name right. “Rolled R, accent on the second syllable.”

“Well, I’m pleased to make your acquaintance. We have a formal dinner among the court tonight—I have time to show you your quarters.” They left the courtyard through an archway and turned onto a path between ornamental lemon trees.

A young woman passing by in the other direction paused with a displeased moue, raising plucked-thin eyebrows. “Oh, I wasn’t aware of a foreign dignitary arriving today.”

“Lisette, this is Lady Sariva Beroth. Her parents fled serving the sultan, and we’re even luckier to have her at our Almesian court.” Ava gestured to the woman. “Lady Sariva, may I introduce you to Lady Lisette? She is a splendid dancer.”

“Bah-rroth?” Lisette’s delicate features creased, perplexed with worry. “I’m so sorry, your name is just so hard to pronounce. What does it mean?”

Lisette beamed. “It would be so rude to get your name wrong, right? I mean, I’d absolutely hate myself for mispronouncing it. I’ll just call you Lady Cypress if I have need of you, and then we can be great friends.”

Did Lisette think she’d change her surname just because fools kept mangling it? Absolutely not. Sariva made herself smile. “Indeed, I do look forward to us spending time together.”

“Yes, of course! Northerners are always awfully clever. If I have any figures to evaluate, I’ll be certain to call on you.”

She wanted to say “I’m horrid at sums” or “What next, will you accuse me of having killed infants for the Northern sultan?” Instead, she curtsied and nodded.

Even though nearly everyone who’d fled the North did so because they objected to the government or refused to serve in the military, people accused them of lying. Didn’t a fortune in furs hide amongst the Northern mountains, and weren’t all its inhabitants mages? Didn’t most people in the North worship the Goddess of All-That-Is? How could anyone flee the North with less than a fortune in stolen gold? Once a new pupil at the village school had told all the others, “Sariva’s family drinks blood. They only came south ’cause the people who didn’t worship their nasty Goddess caught them. That’s why her little brother is so weak because everyone else drinks his blood.” Of course, a lady didn’t stab classmates with pens or hit them over the head with writing tablets, more’s the pity.

Magazines included subtler taunts: concern about secret mages, wealthy Northerners harming trade, assuming even refugees from the North supported the sultan’s every policy. In the city, maybe people would only mangle her name, not her reputation. She remembered her mother’s words: “It’s much more cosmopolitan in the capitol, my dearest. Islanders, desert nomads, people of the tree faith, and of course, plenty of Northerners if you feel homesick or want others to pray with—even though many of them support the sultanate, my friends say you’ll meet some lovely young radicals.”

Sword crashed against sword. Voices shouted. Would she need to run for her life? “Is there some sort of trouble?” Her town’s largest Northern specialty store had gone up in flames a few months ago. She’d heard about a timed fire-starting charm amongst the sacks of imported food, customers praying as they ran for their lives. Swinging her shopping sack, she’d turned the corner and stopped, mouth open. In childhood, she’d picked out ornately carved candles for the family’s rituals there.

Ava gave a reassuring smile, waving off her concerns. “It’s only the squires practicing. In summer they stage mock sieges in the cellars, but this time of the year, they still use the outdoor ring.”

“How…nice.” Her heart still pounded. Would it ever stop?

“Indeed, our knights are some of the most adept on the continent. We might go watch them if you wish.”

Sariva would rather stitch a tapestry of a battle than ride off to join one, but she liked the idea of strong warriors protecting her. “Of course.”

She followed Ava down the path and into a field. In a makeshift arena of packed dirt and wooden stakes, surrounded by tiers of stone benches, trainees brawled with blunt weapons.

The scrawniest one had the upper hand.

His hair shone a muddy, undistinguished color, clay and ochre; his body appeared sparse of all but knees and elbows like an over-articulated marionette. But he fought like a mosquito the bigger boys attempted to swat—dodging, weaving, shoving others in front of him as impromptu shields. One by one, the others trailed from the arena, nursing bruises and casting baleful glares. 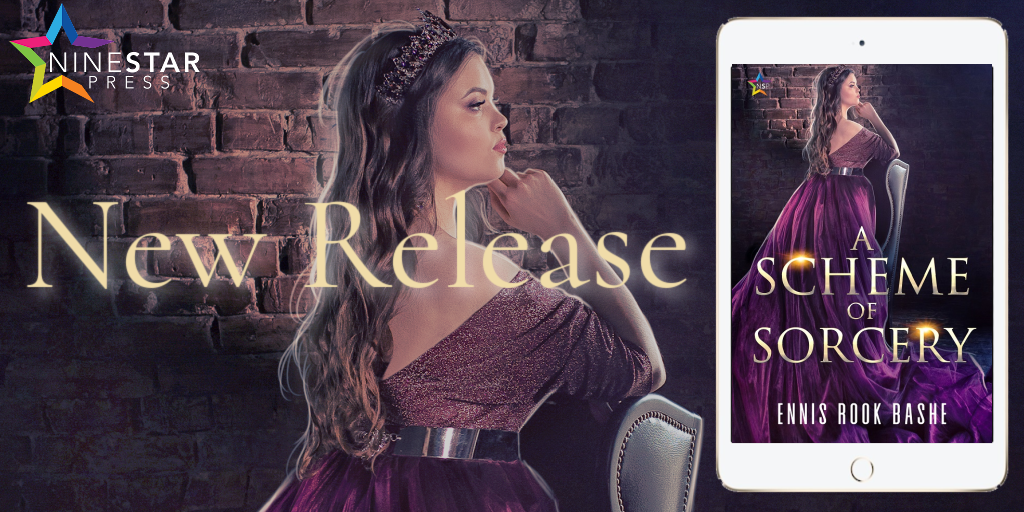 Ennis Bashe is a queer disabled graduate of Sarah Lawrence College, proud cat parent, and prolific writer of romance novels and novellas. Their poetry has appeared in Strange Horizons, Liminality Magazine, Writers Resist, and Cicada, and their short fiction has appeared in The Future Fire, Mirror Dance, and Resistor Vol. 2, among others. Find them on Twitter at @RookTheBird, and sign up for their newsletter at http://www.tinyletter.com/rookthebird