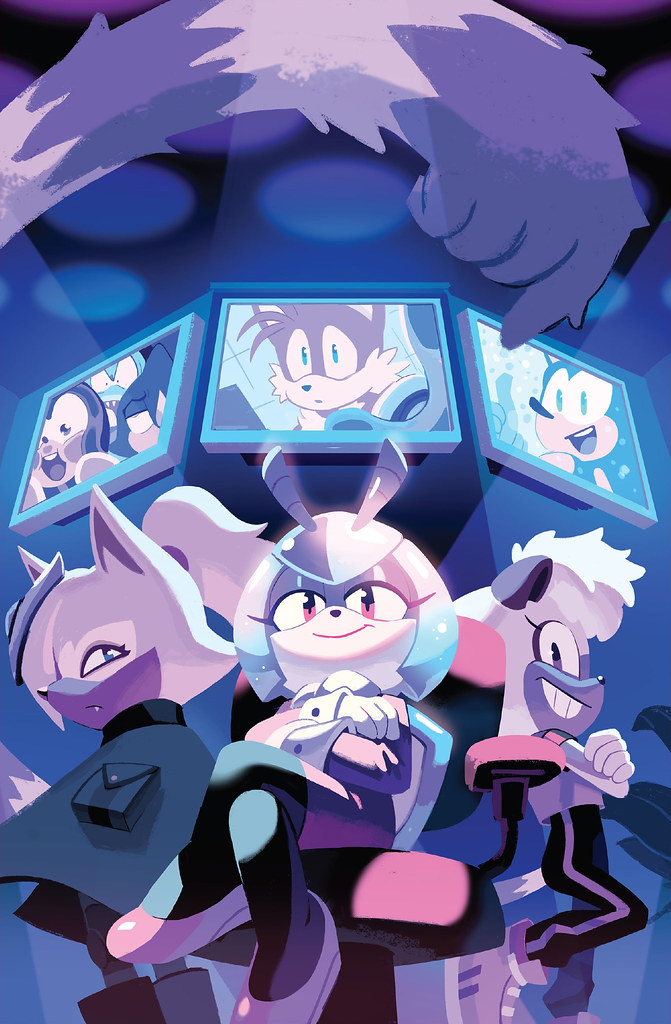 Zeti Hunt, part two! Now that Zavok has his pack, it’s time for them to make a big move. But Jewel the Beetle, newly appointed Restoration leader, has called on Sonic, Tails, and the Chaotix to run interference. Will they be able to stop the Zeti and make it home in time for spaghetti!?

Starting with the covers, this was an interesting selection this month. Priscilla Tramontano’s Cover A is a nice, detailed piece of Jewel, Tangle, and Whisper with a suitably moody colour scheme given the events of the issue. Cover B by Abby Bulmer and Joana Lafuente feels more like a standard kids’ comic cover, full of bright colours and nice, thick lines on the titular hedgehog. The best of the bunch though was Nathalie Fourdraine’s Cover RI. This was a beautiful piece with all the key heroes shown either in-person or on-screen.

The interiors were great. In particular, I thought that the issue really highlighted how adept the art team is with playing with light. There were so many different types of shadow throughout the issue, from various subtle lighting effects depending on the setting, to the more stark shades and glows when the Zeti set a truck alight. By far, the best of these touches come in the final scenes with Dr. Starline and belle the Tinkerer. Here, the attention to detail on the way the light and shade sit on the characters is phenomenal.

In terms of the story, this one felt much better than the previous issue. The setup gave plenty of opportunities for some fun shots – such as Sonic video chatting in bed – and the events that play out set up some interesting steps forward. We get to see Zavok and his crew getting their plan moving, the different ways the heroes react, and Starline chasing his own gaols amidst the chaos. Sonic’s team and Starline were as wonderfully imagined as ever, and most importantly, the Zeti felt more like themselves too.

This was Ian Flynn capturing the modern Sonic magic in the same way as he captured the retro magic in the anniversary special. His writing combined with a great effort from a stellar art team makes this one a must-own issue. This gets the full 5 out of 5 from me.