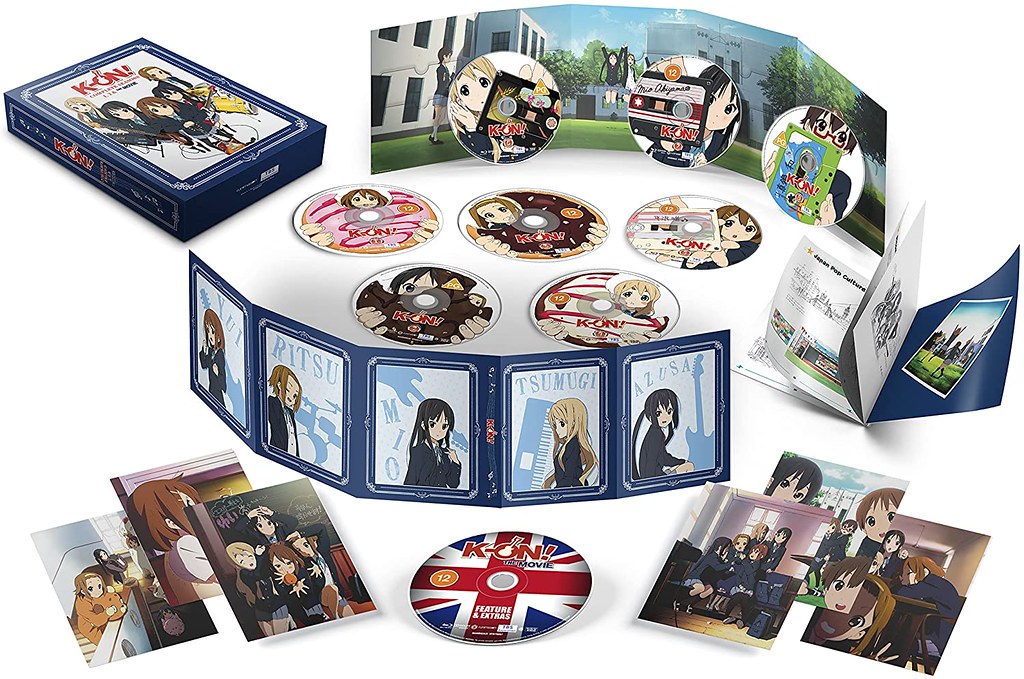 Title: K-On! Complete Collection
Anime Studio: Kyoto Animation
Genre: Comedy / Slice Of Life
Welcome to the Light Music Club!
The Japanese anime phenomenon!
When Yui Hirasawa enters high school, she wants to join a club but can’t decide which one is right for her. Fortunately, the Light Music Club is desperate to find another member or they’ll be disbanded! So, with the enticement of delicious snacks and assurance that no musical experience is necessary, Yui joins the Light Music Club. She becomes the guitarist in this all-girl high school rock band with Mio Akiyama on bass, Tsumugi Kotobuki on keyboard and Ritsu Tainaka on drums. Together, they’re going to rock the school and someday make it to the Budokan!
The complete collection contains 2 seasons and the movie over 9 discs.
LE contents:
1x 5 Panels soft digipack containing 9 discs
6 x Artcards
1x 40 pp Art Book
All packaged in a rigid box

So, I had never watched K-On! before binging the complete collection. It’s one of those shows that I knew about, of course. I knew that it was sometimes credited with popularising moe and that it was a slice of life series that fit with the concept of ‘cute girls doing cute things’ or CGDCT. I think the thing that originally put me off was that I became aware of it at a time when sluice of life anime held no appeal to me. Recent forays into the likes of Flying Witch and Amanachu! got me more interested. Now that I’ve watched it, I’m glad I did.

First of all, let’s talk about the visuals. Kyoto Animation definitely deserves some credit here, because they have gone to great lengths to add a sense of realism to the way things move. Hair, in particular, is immaculate in the way it’s animated, shifting and swaying at just the right times to match what’s happening. The musical performances too look right and you can see the effort that was put into making the scenes work.

In terms of characters, I thought they were all endearing. Nobody here felt one-dimensional to me, and the way they all had fun together was, honestly, infectious. When the characters did something that made them smile, it was hard not to do the same. The way they played off each other, and the ways their personalities meshed, was just so well done. If I had to pick favourites, I’d say that the band’s drummer, Ritsu Tainaka, and bassist, Mio Akiyama, stood out for me. An extra shout-out goes to their club advisor, Sawako Yamanaka who definitely brought her own brand of energy to the proceedings.

The story itself was surprising too. Being based on a 4-koma, I wasn’t expecting much here. In a way, that’s what I got. There wasn’t a massive arc to guide the episodes along, it was more a set of events that tied into each other. In this case, it worked really well though. The individual moments are designed to make the girls feel more human and alive, and it succeeds in that by mixing the fun and sentimental moments with a clear knowledge of how to create subtle moments. Body language, for example, is so important at times, and Kyoto Animation executed this well.

From an audio standpoint, this was almost entirely great. The songs are catchy and feel like they fit with this particular band of musicians. The song for Azusa that they perform in the movie was a real standout too; super sentimental in the right way. I also thought that the dub cast in the main series was excellent. My only real problem with it all came with the movie. The English accents on display were pretty terrible. The cast playing the Brits sounded like people trying to do what they think British people sound like without looking at actual accents outside the stereotypes. This is a minor issue though.

Overall, I can’t recommend this enough. K-On! is beautifully animated and full of heart. The songs are strong, and the issues are minor. Throw in that excellent collector’s edition packaging and you’re onto a winner. This is an easy 5 out of 5.