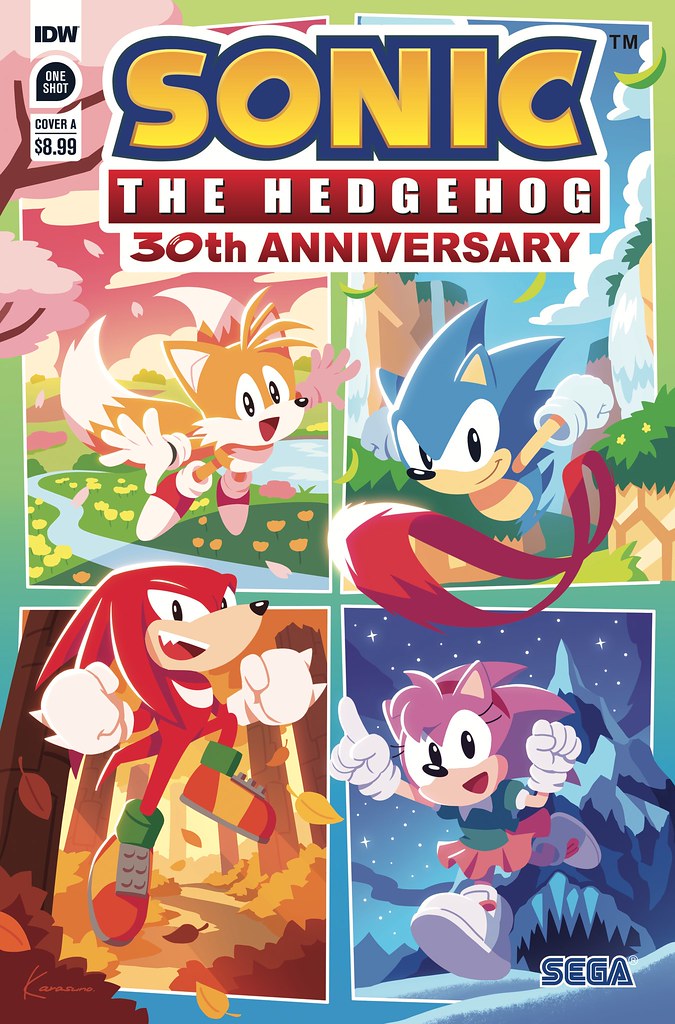 After 30 years of going fast, it’s time for fans to celebrate the speediest hedgehog of all time! It’s an unbelievable birthday celebration for Sonic the Hedgehog with his first Classic Sonic special!

First, in “Seasons of Chaos” by longtime Sonic scribe Ian Flynn and artists Aaron Hammerstrom & Reggie Graham, Sonic goes on an adventure from pleasant spring valleys to wintry wonderlands in search of the Chaos Emeralds. But Sonic’s not alone, with a little help from his friends Miles “Tails” Prower, Knuckles the Echidna, Amy Rose, Mighty the Armadillo, and Ray the Flying Squirrel, they’ll race, fight, and fly their way to victory against the baddest of baddies!

Then, in “Dr. Eggman’s Birthday,” the vile, villainous Dr. Eggman takes center stage in a story written by New York Times bestseller Gale Galligan (The Babysitters Club)! And how does the bad doctor celebrate the occasion? Only his Badniks know for sure…

Finally, in “Sonic Learns to Drive,” Sonic’s up against a tough challenge: Driving! When the fastest thing alive can outrun any car, will Sonic have the patience to learn… or will he finally get left in the dust? Written by the hosts of My Brother, My Brother, and Me, The Adventure Zone, and New York Times bestsellers, the McElroy Brothers!

Grab a slice of chili dog cake and don’t get left in the dust on the most way past cool book of the year!

The Sonic the Hedgehog 30th anniversary special is a collection of three stories, so I’ll be looking at each of these in order. First up is Seasons of Chaos. The story is written by Ian Flynn, with Aaron Hammerstrom doing the pencils. Thomas Rothlisberger and Tracy Yardley do the line art, Reggie Graham and Matt Froese were on ink duty, and Reggie Graham did the colours. Despite this long list of people being involved, the story does have a uniform look and feel visually. In a way, it comes across as being fairly classic, largely thanks to it using Amy Rose’s old design. There are a lot of little visual nods to the history of the franchise too, from zones to items, and even some returning characters.

In terms of the story itself, this was by far my favourite tale in the book. This was a love letter to not only the old games, but to Sonic Mania (which was itself a love letter to the older games). Ian Flynn had the chance to show off how dedicated he is to the Blue Blur here, and did so with style. This is a charming tale that will be enjoyable for newcomers, and give a few extra smiles to long term fans. Honestly, this was pretty much perfect as a celebration piece.

Next up we had Sonic Learns To Drive which was written by Clint, Justin, Travis, and Griffin McElroy. The art was by Mauro Fonseca, and the colours by Valentina Pinta. Art wise, this felt more like a modern comic aimed at a younger audience to me. That wasn’t a bad thing, the style was fine, and it worked well enough with the story.

As far as the story goes, this was fun enough but was my least favourite of the three. There’s a decent explanation as to why Sonic would need to drive a car, the humour is fine, and it moves along quickly. I would say that having fewer pages than the first story went in its favour as it didn’t outstay its welcome. So, worth a read, but it is deflating compared to Seasons of Chaos.

Finally, we have Gale Galligan’s Dr Eggman’s Birthday, featuring art by Thomas Rothlisberger, with colours by Nathalie Fourdraine. I enjoyed Eggman having the classic early game design here. It was a nice throwback to see and fits with the celebratory nature of the release. The story is a silly one but in the right way. It turns out, Eggman’s robots do care about the villain.

Overall, this was an excellent release. Honestly, if it had just been Seasons of Chaos, it would still be excellent, but the other two stories are a nice bonus. This is charming and will be fun for fans, both new and old. This gets the full 5 out of 5 from me.