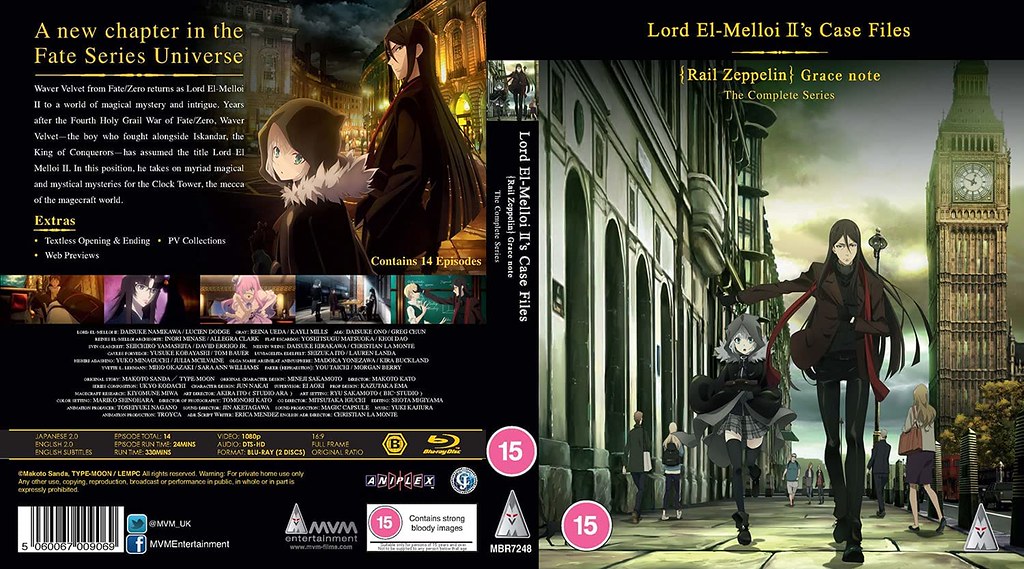 Title: Lord El-Melloi II’s Case Files {Rail Zeppelin} Grace Note Collection
Anime Studio: Troyca
Genre: Mystery / Supernatural
A new chapter in the Fate series universe.
Waver Velvet from Fate/Zero returns as Lord El-Melloi II to a world of magical mystery and intrigue. Years after the Fourth Holy Grail War of Fate/Zero, Waver Velvet-the boy who fought alongside Iskandar, the King of Conquerors-has assumed the title Lord El Melloi II. In this position, he takes on myriad magical and mystical mysteries for the Clock Tower, the mecca of the magecraft world.

Now, this was an interesting series to watch. Going into it, I wasn’t initially aware that it was a spin-off from the Fate series. That was a nice surprise but one that came with an unexpected problem for me. You see, I’ve enjoyed all the Fate releases I’ve watched, but I haven’t seen near all of them. I still haven’t watched Fate/Stay Night, and more importantly, I haven’t seen Fate Zero¸ which this one spins off from.

So, that means that I have less knowledge of the returning characters. I did recognise Kairi Fate Apocrypha, so that was cool. I kinda wish we’d gotten to see Astolfo here too in that regard. That’s not to say that the characters we do get weren’t worthwhile though. Our primary protagonist, Lord El-Melloi II (aka Waver) suited his role as the main detective well, with an intense attention to detail when trying to solve the mysteries presented to him. Reines El-Melloi Archisorte added a fun wrinkle to set up, and Luvia was entertaining enough. My favourite character though was the Watson to Lord El-Melloi II’s Holes, Gray. She is his apprentice and carries a Mystic Code called Add that acts as a pseudo-Right hand from Vampire Hunter D. Her story intrigued me more than the others, and she was a big part of the action scenes too.

Visually, the series impressed me. I only really know Troyca from Bloom Into You and Beautiful Bones, and this stands nicely alongside them. The animation is smooth, the linework is crisp, and it all pops when it needs to. The action scenes are impressive, the facial work throughout the series is decent, and some of the backgrounds are actually pretty classy.

Both the opening theme (starting the case: Rail Zeppelin) and ending theme (Hibari) are excellent though in different ways. That the core OST is also very good is a bonus in that regard, and it does a great job of enhancing the scenes. I would also say that the dub voice cast does a great job with the script.

The story, on the other hand, will be naturally divisive. Mystery series generally take one of two routes: either you enjoy it because you’re following the clues and trying to solve the case with the detective. The other is that, for one reason or another, you can’t solve the case yourself, so enjoy watching the detective do it for you. This series follows the second route because the mysteries are heavily reliant on the magic system of the world. We don’t really get things explained in terms of how it works, which means there’s no way to play Holmes ourselves.

This is by far a less popular way to run a mystery series, and I expect it will put a few people off. If, however, you aren’t into playing sleuth yourself, or you’re a big fan of the main franchise, this will be far more enjoyable for you. There’s less flash than you may expect, given the style of stories being told, but there should be enough familiarity to keep fans satisfied. The mysteries themselves are fun too, even if you can’t easily follow along with the detective work. That they focus less on being a whodunit and more of a whydunit was a nice touch too.

So, where does this stand overall? The series made a stylistic choice with its storytelling and stuck with it, which deserves some praise, even if that choice is one that will divide viewers. Despite this, the interesting set-up and the enjoyable cast combine well with some strong aesthetic points to make this a worthwhile watch. I give it a solid 3.75 out of 5.