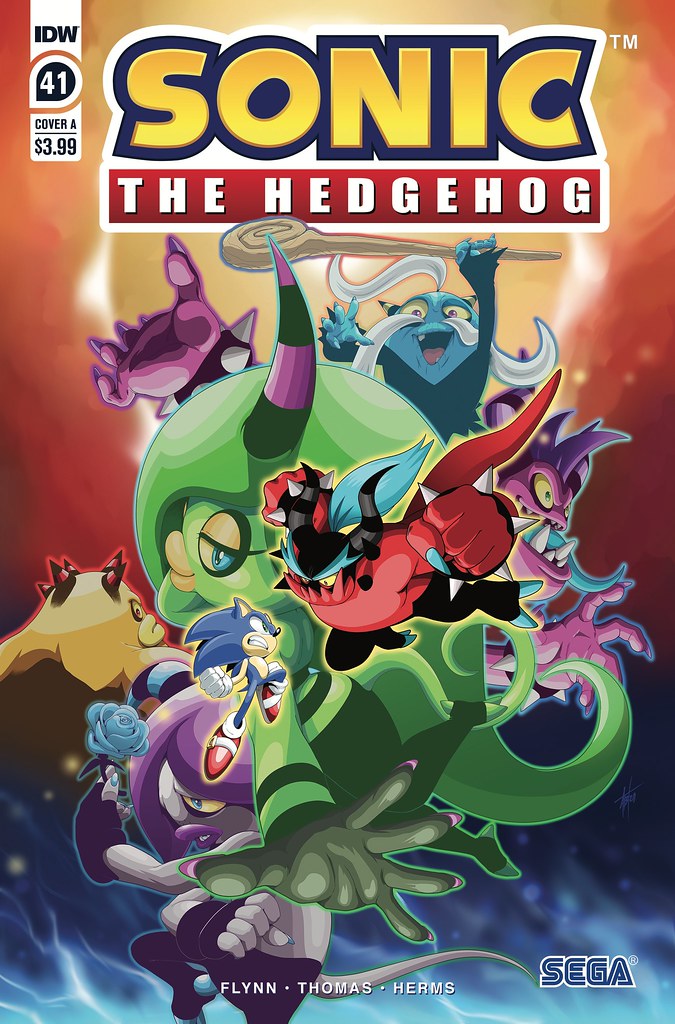 The Deadly Six are still on the loose and attacking towns. Jewel the Beetle recruits Sonic’s friends the Chaotix to find and stop the monsters, but Zavok is looking for his minions, too-he’s angrier than ever and wants to reunite. The Chaotix will have to act quickly to outsmart the Deadly Six!

The selection of covers this month is an odd one. Cover A, by issue artist Adam Bryce Thomas, is easily the best of the bunch and does a great job setting up what is no doubt to come. Cover B by Natalie Haines is a really nice piece of art but is far removed from the themes of the issue. Meanwhile, Nathalie Fourdraine’s Cover RI is quirky, but the inclusion of Sonic and Tails looking confused felt out of place to me.

The internal art was very good. Adam Bryce Thomas is one of the most consistent artists on the roster and, as always, the details shine through here. From the emotions in Zavok’s eyes to the well-posed action scenes, there’s plenty to enjoy, especially when teamed up with Matt Herms’ excellent colour work. Visually, the only complaint I have is that I find Adam draws Zazz’s face a little too wide. Or it seems that way, anyway.

Now, when it comes to the writing, I was glad to see Ian Flynn back at the helm for a Deadly Six arc. He is, in my opinion, the one that writes this group the best. Zavok in particular is one that I think Ian adds so much more to than some of the other creatives that have taken on the character.

In this case, the writing felt a little off. Zavok’s speech was, at times, stilted. There were other little things too, such as him asking a civilian to explain rebuilding and protecting as it is not the zeti way. Even though he is on a mission to rebuild his group of villains and has seen plenty of both over his various appearances.

Things picked up towards the end when the Restoration got involved. Lanolin the Sheep made a cameo, which is always welcome, and the main heroes were all geared up for battle by the end of the issue. On the strength of those final pages, I’m looking forward to what comes next. This is an issue designed to set up the arc though, and it has some failings as a result. I give this one a 3 out of 5.