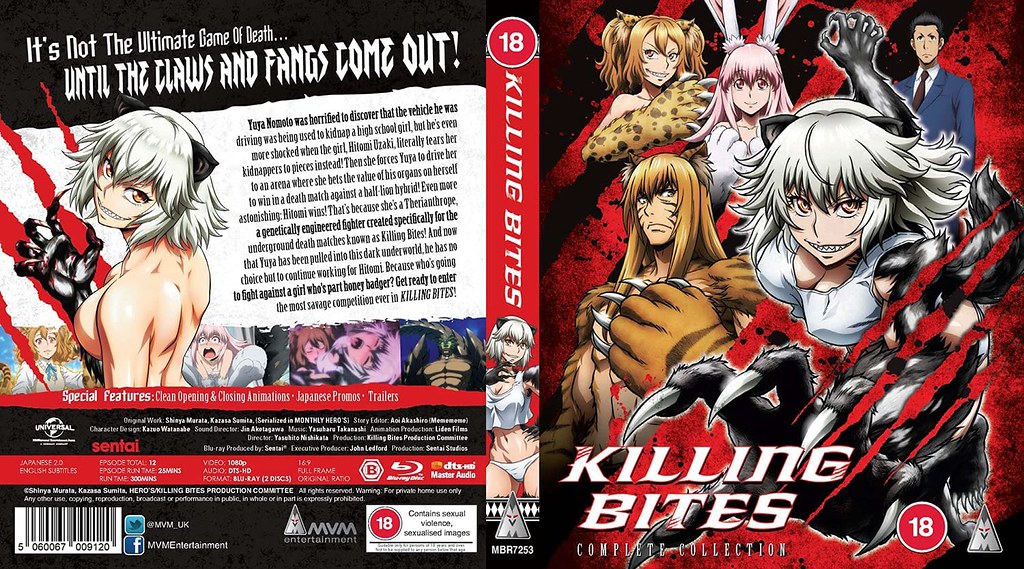 Title: Killing Bites
Anime Studio: Liden Films
Genre: Action / Seinen
Yuya Nomoto was horrified to discover that the vehicle he was driving was being used to kidnap a high school girl, but he’s even more shocked when the girl, Hitomi Uzaki, literally tears her kidnappers to pieces instead! Then she forces Yuya to drive her to an arena where she bets the value of his organs on herself to win in a death match against a half-lion hybrid! Even more astonishing: Hitomi wins! That’s because she’s a Therianthrope, a genetically engineered fighter created specifically for the underground death matches known as Killing Bites! And now that Yuya has been pulled into this dark underworld, he has no choice but to continue working for Hitomi. Because who’s going to fight against a girl who’s part honey badger? Get ready to enter the most savage competition ever in KILLING BITES!

Killing Bites is based on the manga series written by Shinya Murata and illustrated by Kazuasa Sumita. In some respects, the series can be summed up as what would happen if you took catgirl-style characters and placed them in a highly violent setting that focuses more on bloodshed than cuteness. It’s that setup that made me excited to check this one out. Anime has a long history of producing memorable kemonomimi characters, including the likes of AnaPuma and UniPuma (Dominion Tank Police), and Ranka (Murenase! Seton Gakuen). So, I was looking forward to seeing what the series would do with the likes of a honey badger being used as a template animal.

In that regard, the series does do pretty well. Yes, the moves sometimes have a degree of fantasy flash that would fit in with a shonen series, but the characters do embody their animals fairly well at times. Leading lady Hitomi is as tenacious and vicious as her real-life animal counterpart, and equally as hard to kill to boot. The other cast members too play into their animalistic strengths, ranging from speed (cheetah) to armour (pangolin).

The action scenes are undoubtedly a highlight, thanks largely to that very point. They’re brutal, often exciting, and throw in some animal facts to boot. That’s a good thing too because once we finish the monster-of-the-week combat format of the first three episodes, the remaining nine are all set in the titular fighting tournament. What that means is little snippets of story interspersed with a lot of combat.

The downside to this is that it does leave the show feeling a little unbalanced. There clearly is a story here, with the main point being a power struggle between those involved in the backstage running of the tournament. There’s even a flashback to explain why Hitomi is different from her counterparts. The problem is this format means there’s very little space for anyone to grow in any way other than in strength. It works well enough in this instance, though it won’t be to everyone’s taste.

The anime adaption is by Liden Films who have produced several popular shows through the years, including Love and Lies, Cells at Work! Code Black, and Magical Sempai. They do a good job with animation here, with everything feeling very kinetic. You can also tell that they are accomplished in the fan service department because there’s plenty of that go around, whether it be skimpy outfits or suggestive posing. As is always the case, your own tolerance for this type of content will affect your enjoyment here. Audio-wise the show is fine. The voice cast does well but lacks a standout performance, and the soundtrack is okay, but nothing more.

When it comes to problems with the series, the focus on combat over story will certainly make this one disappointing for some. By far the biggest issue for me though was the repetitive use of sexual assault. We open with a group of males attempting to assault a high school girl. Later, one of the tournament combatants attempts the same. Another character uses their animal traits to force characters into a state of lust. And then there’s the character that sides with the apparent good guys and carries out an assault too.

Honestly, if it had just been the opening scene I’d have let it slide. That it’s used so much though just makes it feel like the author didn’t have too many ideas as to how to place Hitomi in peril. It’s not the only thing to fall into that category either as we get several instances of characters apparently dying, or getting close to, only to revive at the last moment. Sometimes in the same fight. Again, it’s a repetition of ideas that feels far too obvious to be intentional.

When you start thinking like that, it makes the lack of story seem underdeveloped rather than a stylistic choice in storytelling too, which lowers the enjoyment of the series as a whole. You can also throw in some of the odd choices such as a character having an arm ripped off, only for it to not bleed until after they finish fighting, which is not how blood flow works. Also worth noting is that the series does have a fairly reasonable ending, but it gets partially retconned in a post-credits scene, with makes it lose something for me.

Overall, Killing Bites is a hard one to judge. The action is strong and the concept is interesting enough. The overused assault theme and inconsistent moments though make it less enjoyable than it should be. It’s worth watching if you can handle the negatives though, so I give this a 3.25 out of 5.