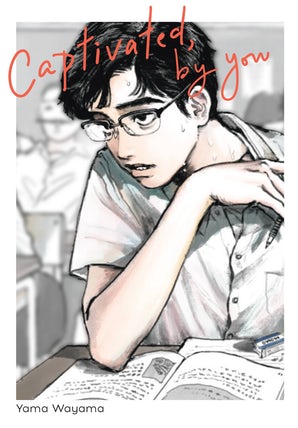 Title: Captivated, By You

Hayashi’s frank, guileless demeanor quietly draws the attention of classmates and strangers as he counts all the stairs in school, photographs street signs, and dries sweet potatoes on the classroom balcony. In a world shaped by conformity, Hayashi is refreshingly and unapologetically true to himself. Conversely, Nikaidou has worked very hard to perfect a gloomy, dour façade that keeps his classmates far, far away. While much of the school regards Nikaidou as a bad omen, one student catches a glimpse behind the mask and—undeterred by rumors of bad luck and supernatural powers—begins to pick away Nikaidou’s carefully crafted persona…

High school relations are moody, quirky, and full of surprises. But most of all, they’re downright captivating.

Captivated, By You is the debut manga from Yama Wayama, and won both the Tezuka Osamu Cultural Award and 23rd Japan MediaArts Festival New Face Award. The first thing to note here is that blurbs are selling tools. They’re designed to entice you into giving a book a chance and give you a good, general idea of what to expect. Here, I’d say we have one of the better examples of that. It’s an odd collection of stories that feature moody moments, quirky characters, and a surprising amount of enjoyment given the subject matter.

What I mean by that is these stories are not about the sort of characters you normally see taking the lead in manga. These aren’t the typical pretty boy action heroes with strong morals or the down to earth everyman types that you’re supposed to project yourself onto. What we have here is a collection of characters that are simply representations of the real-life ‘weird kids’ you probably saw in high school yourself. This sort of cast goes against the grain and it makes it feel like it shouldn’t work. Somehow though, it does.

In that way, I think the book’s biggest asset is its ability to weave a realistic portrayal for high school kids that aren’t in the popular group. Some of us knew these kids, others were them. It’s a reminder that high school for those not in the in-crowd had challenges, but wasn’t always without some fun moments. The characters are really quite likeable as a result and provide a refreshing change of pace from the more common styles of high school manga.

The book is referred to as a BL title, but I wouldn’t say it full commis to that label. There are hints of some Boy’s Love themes, but they aren’t overt or in your face. It works in this context because these aren’t stories that require that focus. All they really need are little nods in that direction.

The art style is fairly plain, but in a way that fits with the tone of the release. Characters are drawn to avoid being glamorised and there isn’t really any flash to note. I did appreciate the acknowledged nod to Junji Ito though, and the surprising comic effect it had.

Overall, I would say that Captivated, By You will not be for everyone. The quirky style of story and the perspective it offers will be very different for many, and that may be a little jarring. Persevere though and you have a wonderfully unique release here. I give it a solid 4 out of 5.