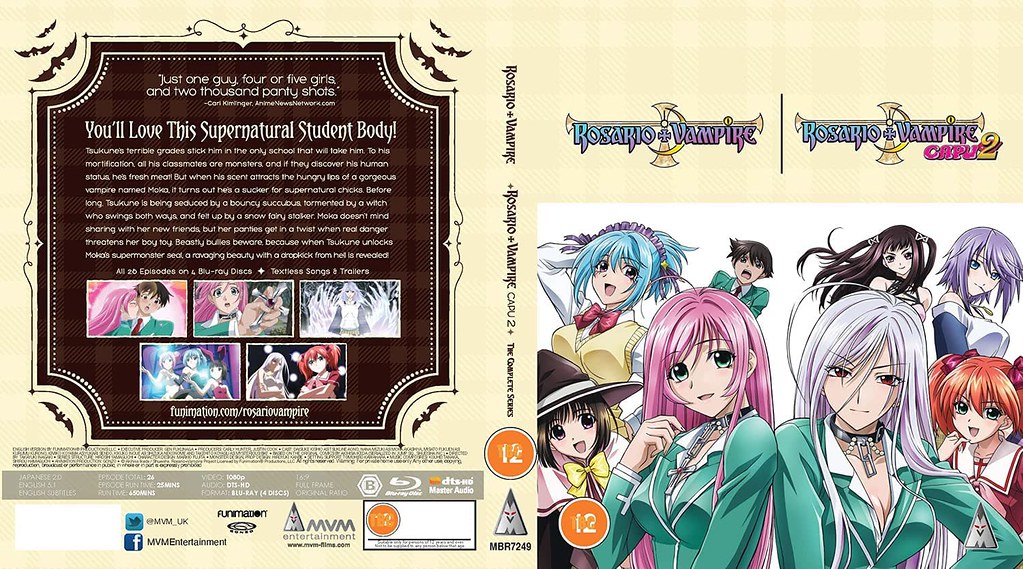 Title: Rosario + Vampire Complete Collection
Anime Studio: Gonzo
Genre: Harem / Supernatural
Rosario + Vampire S1 & S2 Complete Collection
Tsukune’s terrible grades stick him in a school where all his classmates are monsters–and if they figure out his human status, he’s fresh meat. Things perk up when his scent attracts the hungry lips of a gorgeous vampire named Moka. Soon Tsukune is seduced by a succubus, tormented by a frisky witch, and stalked by a snow fairy! He’s a slacker in the human world but scores an A+ with monsters.

Rosario + Vampire is an anime about monsters wearing panties. Rosario + Vampire Capu2 is an anime that wants to make it even more clear that it’s about monsters wearing panties. If that didn’t make it clear, there are a lot of panty shots in the show. Whether it be from high kicks or the resident werewolf snapping a photo, it’s all rather constant. And if that wasn’t enough, Moka’s episodic shifts into her other self is accompanied by a magical girl styled transformation that sees her boobs and butt plump out, sometimes with comical sound effects thrown in.

What I’m saying is there’s a lot of fanservice. The thing is, if it felt natural it would at least be less overwhelming. As it is, it’s just plain obtrusive.

Unfortunately, the problems don’t stop there. The general consensus on Rosario + Vampire is that the manga is better. I’ve only read the first few volumes, but I can see why people think this. The art is better, the fan service is toned down, and the characters feel like they have a bit more depth. What we have with the anime adaption is a show that took a fairly balanced supernatural harem story and shifted the balance more towards the harem side.

The stories are presented in a monster of the week format for the most part, with each following the same sort of format, and almost always leading up to a short fight. And I do mean short. Basically, Tsukune removed Moka’s crucifix, she turns into super-powerful Moka, and the bad guy is vanquished in seconds. If you’re big on traditional monster lore, you’re also going to hate Moka being a vampire but being able to walk around in daylight and wear a crucifix without any issue. As you may expect, Tsukune is a pretty bland lead too.

That all being said, the show isn’t entirely worthless. I enjoyed the selection of monsters on display. Even when poorly used, it is fun to see creatures like a werewolf, witch, or succubus running amok. While not on part with some of the studio’s other works. The general concept is also decent, and some of the story arcs do have potential, even if not fully realised.

While I’m not a massive fan of Gonzo when it comes to animation, they are usually watchable, and this is no different. If you got on with the likes of Burst Angel or Linkin Park’s Breaking the Habit music video, you’ll be fine here. The voice cast is also fine and does well enough with what they have to work with.

Overall, Rosario + Vampire is best described as disappointing. Honestly, for all the stuff that I want to like, such as the monsters and the overall concept, the series does an excellent job of burying it all under fanservice, bland characters, and underdeveloped action scenes. This isn’t as bad as Dai-Shogun – Great Revolution, but it isn’t close to being good either. I give this a poor 2 out of 5.