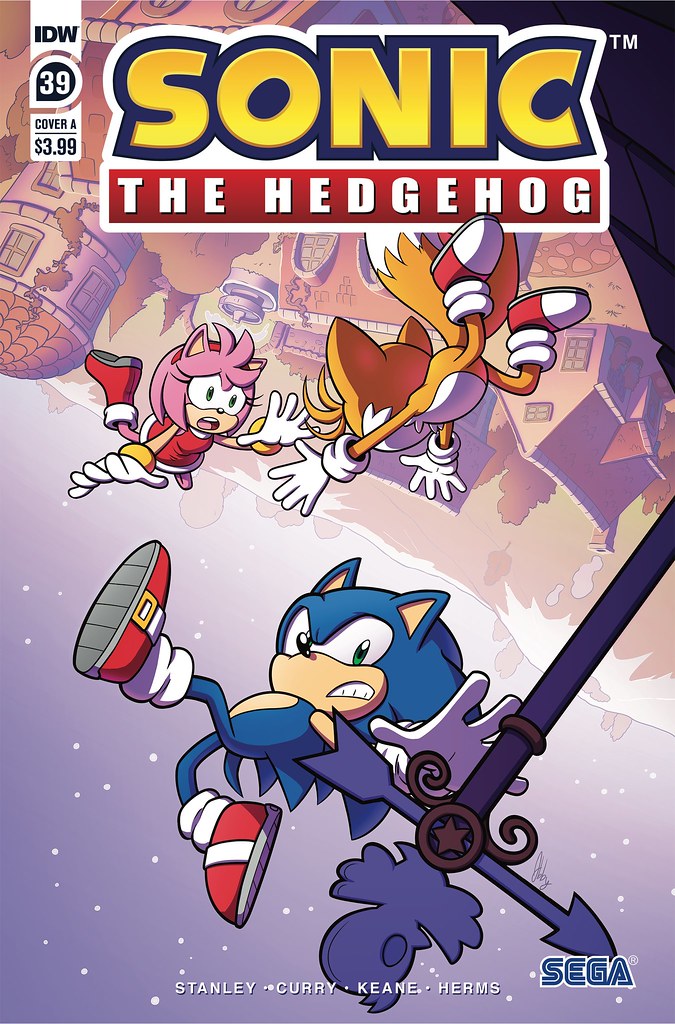 Sonic, Amy, and Tails are still stuck in Eggman’s evil tower and being subjected to his increasingly crazy tests. It doesn’t help that Tangle and Belle have unknowingly begun controlling the tower and are making it impossible for their friends to escape! Everyone’s limits are pushed as they try to make it out in time in “Test Run,” part three!

Both Cover A (Abby Bulmer and Joana Lafuente) and Cover B (Gigi Dutreix) are very good. They feel like typical Sonic comic covers, though in different ways. I have to give the best cover to Natalie Fourdraine’s Retail Incentive cover though. It feels like a vintage horror movie poster and plays into Belle’s current predicament.

When it comes to the internals, this is one of my favourite line-ups. Both Evan and Bracardi are excellent line artists, and this issue lets them play to their strengths. It’s an action-heavy release, at least when it comes to our main trio of Sonic, Tails, and Amy, and we get treated to some wonderfully varied panels in that regard. By far my favourite part of the art this issue though was Amy Rose. Her expressions feel super cartoony but still fitting with the action. It’s like the perfect combination of fitting with the story tone while still reminding us that this is an all-ages franchise.

Meanwhile, Tangle and Belle’s encounter with Cubot and Orbot is a veritable bounty of exaggerated lemur goodness. She’s such a beautifully over the top character, and her facials are absolutely delightful. As always, Matt Herms does a great job with the colours though out, giving us some vibrant colours and enough shade to give depth without losing the cartoon feel of the release. In particular, he deserves praise for the glow he achieved on those first few panels of fire. It really pops.

The story continued to sail along here too. It didn’t give us much in the way of progression, but it didn’t need to. Being the penultimate issue of the arc, the focus here was more to build up the final conflict. So, what we get instead is a mix of action and comedy with a focus on characterisation. Tangle is a joy to read, of course, and we get all the classic stuff to go with it, such as Amy’s crush, and Sonic’s attitude.

Overall, this was another excellent issue. It was fun, on-brand, and featured some great visuals. Really, what more could you want? I give this one 5 out of 5.