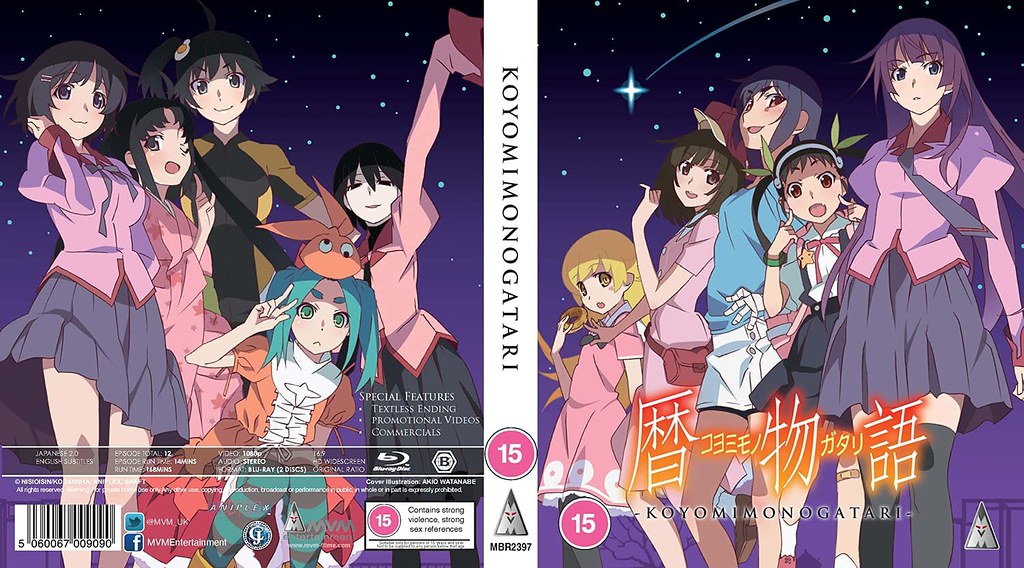 Title: Koyomimonogatari
Anime Studio: Shaft
Genre: Comedy / Mystery / Supernatural
“You’re looking for a horror story? I wish I got one for you.”

Untold stories… one per month for one year…

Taking place between other Monogatari stories, a chapter not yet told surrounds Koyomi Araragi and the strange happenings he gets pulled into over the course of a year. With one episode told per month, the story unravels in this 12 episode-long series of shorts.

The Monogatari franchise is one that tends to divide anime fans. For me personally, I’m a bit up and down on it. If you read my reviews for Kizumonogatari Tekketsu, Nekketsu, and Reiketsu, you’ll know I really enjoyed those releases. My attempts to get into the main series though have been less fruitful, however. It’s a series I find to be a little unfocussed. In a way, this series has an advantage in that regard.

Koyomimonogatari is a collection ONAs (Original Net Animations), running to about 14 minutes per episode. They are essentially standalone side stories that slot in at different points of the main franchise. What I found was that short running time meant that the episodes felt oddly more whole to me. It’s like the shorter length forced the stories to use their time well.

Fans of the franchise will also feel right at home with the various characters. Being side stories that fill in gaps between main arcs, by nature, these episodes are not designed to offer largescale character development. Instead, we have familiar characters acting in familiar ways. In that way, the collection works perfectly as a way to revisit Araragi and the gang in short bursts.

The downside to this is that this is not a jumping-on point. Without a pre-existing attachment to the characters, there won’t be much for them to offer you, and without prior knowledge of the series, it won’t all make sense. It’s something that is aimed more at current fans than it is at dragging in new ones.

That all being said, it is a decent enough way to demonstrate the aesthetic style of the show. If you already view Monogatari as an artsy series, this will further cement that. In that regard, showing an episode or two to a potential new fan as a way to give them an idea of what to expect isn’t a terrible idea.

So, how do I sit on this one overall? I’m mixed. I appreciated the visual style and the pacing of the short episodes. At the same time, even with more focus, there was still something missing. If you view the franchise as a whole as a masterpiece, you’ll find plenty to enjoy here. If, like me, you’re mixed on the series as it is, this a 3 out of 5 release.