Title: Our Home’s Fox Deity
Anime Studio: Zexcs
Genre: Comedy / Fantasy / Slice Of Life
Tōru and Noburo are brothers of the Takagami family who have just returned to their late mother’s hometown of Mitsukawa. Toru has Yin in his blood and is constantly targeted by the yōkai and other creatures lurking in Japan. When Tōru is targeted by one, his brother Noburo releases the fox deity Kūgen Tenko who protects Tōru from the monster. Kūgen now acts as the protector of Tōru and Noburo to keep them safe from any threats while simultaneously trying to adapt to the modern world.

Wagaya No Oinari-Sama, aka Our Home’s Fox Deity, is based on a series of light novels by Jin Shibamura. This adaption was animated by Zexcs, who are perhaps best known for Flowers of Evil, and Diabolik Lovers. The premise itself is pretty straightforward, but the execution is not. It has been said that the series doesn’t know what sort of anime it wants to be, and honestly, I think that’s one fo its greatest strengths. Throughout eh 24 episodes, we jump a healthy mix of elements including shōnen style fight scenes, an at times almost harem-esque set-up, some supernatural horror, comedy, and a dash of slice of life. By not committing itself to one individual genre, it manages to take the potentially generic premise and flip it into something that feels a little more original.

The series adequately supports its’ genre-bending antics with a decent cast of characters too. The ritual fox deity, Tenko Kūgen, is the real standout among them. Sporting three forms – male, female, and fox (they have been sealed away for along that they’ve forgotten what gender they were originally) – the guardian spirit guides much of the action, regardless of what genre we’re being shown. They also have an absolutely adorable laugh. The God of commerce, Ebisu, is no slouch in the comedy front either, giving us a few laugh out loud moments in his appearance, and the hand-puppet wielding Mubyou is an interesting addition to the deity end of the cast. Meanwhile, Noboru’s classmate/potential love interest, Misaki Saura, is excellently entertaining when her imagination starts to run wild, leading her to come to progressively more overblown conclusions about Noburo and the other cast members.

The story itself manages to throw a couple of surprises in, albeit while mostly sticking to what you’d expect. For me, I thought it was most worth praising for managing to take two trips to an Onsen without turning into fan-service-gag episodes. In fact, the episodes in question turn into a ghost story and a comedy/mystery respectively. There’s even a two-episode arc about werewolves that feature some nice looking transformations. While it won’t blow anyone away, the animation and audio are both decent overall, too, with the most praise going to Kuu’s female VA (Yukana) and Ebisu (Daisuke Ono) who steal the show performance-wise. 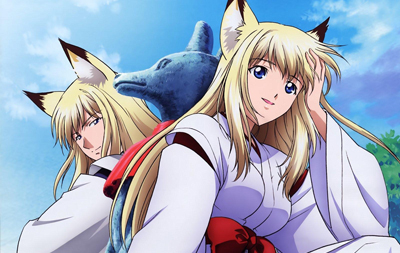 Overall, Our Home’s Fox Deity is a well-executed mish-mash of genres that features some wonderfully entertaining moments to match most people’s tastes. Even with a few less interesting characters, the positives are strong enough to more than counter-balance this. It may not be your favourite anime of all time, but it does plenty to endear itself, and I score it 4 out of 5.

One thought on “Our Home’s Fox Deity [Anime Review]”