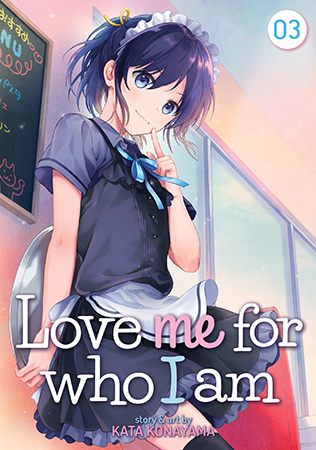 Love Me For Who I Am Volume 3

Summer break is almost over and Mogumo still hasn’t finished their summer homework! Can they finish it in time? Meanwhile, Tetsu’s facing a different kind of problem: how should he explain his relationship with Mogumo to his friends? And does Mogumo even want him to explain it? More so than the previous volumes, this primarily felt like a Mogumo tale. They finally got to take the spotlight properly and

First, we have the café staff catching up on their schoolwork, Mogumo meeting Tetsu’s friends and an encounter with Suzu’s boyfriend. These chapters form a period of growth for Mogumo. They learn that, if they explain their identity to people, they do generally understand. It was a really nicely done piece because it showed Mogumo becoming more comfortable with themself, and also with the idea that making their relationship with Tetsu public wouldn’t necessarily be bad. Mogumo has mostly avoided other people, but they’re seeing now that they don’t have to.

That newfound confidence gave Mogumo the strength to do something else too. They arranged a trip to a mini-Pride event to show Kotone that she isn’t alone in how she feels about girls. Mogumo eventually put their foot down and told Kotone outright that they can’t be a girlfriend substitute, and then helped her finally come out.

I am, honestly, so happy that we finally had a volume where Mogumo felt like the lead character. Their arc here was an important one too because it saw them grow in how they feel about themselves. Best of all, they used that newfound strength to help their oldest friend. It made them all the more likeable.

It was also really nice to finally meet Suzu’s boyfriend and see how they act together. It was nice to see that he’s actually quite sweet, even if his introduction was a little aggressive. I thought it was interesting seeing how the definition for LGBT+ was worked in, with the teens not really having much knowledge of the larger community and so needing it explained. It was a nice touch because the characters really haven’t given any indication that they know much beyond the basics so far, so in essence, it gave a reasonable way to do this.

Art-wise, I thought this was a strong release too. The over the top expressions fit well with the events happening on the page, and the more subtle ones did the same. Kata Konoyama clearly has a knack for knowing when to ramp things up and when to hold back, and that helps the series immensely.

Overall, I thought this was the best release of the series so far. Mogumo was excellent as the focal character, the story pushed forward well, and the cliff-hanger ending has me excited for the next one. I give this a 5 out of 5.