Devid Khandelwal desperately wants to experience the supernatural. After years of studying everything from crystals to tarot to spellcasting, nothing has happened that would tell him the Shadow Realm is real. And that kills Dev. As a last-ditch resort, he purchases a summoning board, an occult tool that will grant him his ultimate desires.

Cameron Habersham is Dev’s best friend. Cam loves Dev like a brother and will do anything for him, as long as he looks good doing it. So when Dev asks him to perform the summoning board’s ritual, he reluctantly agrees, but he knows nothing will come of it. Nothing ever does.

However, within a day, Dev and Cam’s lives are turned upside down as wishes begin to come true. They discover the existence of a supernatural world beyond their imagination, but peace between the species is tenuous at best.

Dev finally gets to see the Shadow Realm, meets the man of his dreams, and is inducted into the local male coven. But for all the desires that were summoned into existence, Dev soon realizes the magical community dances the line between good and evil, and Cam ends up on the wrong side of everything.

The old adage is true: Be careful what you wish for.

“It’s how much?” Cam scoffed, glaring at Damien behind the counter.

“Ignore him, Damien. New piercing? I like it.” Dev tried to ameliorate his best friend’s rude comment, then turned to scowl at Cam. “Honestly, why did I ask you to come?”

“Because you love me.” Cam tapped a finger on the box Dev clutched in his hands. “Dev, your parents are going to kill you if you spend that much money.” Cam cocked an eyebrow at Dev. “And seriously, man, how are you going to pay for…whatever that thing is?”

“With this.” Dev pulled out his wallet and flipped the black leather cover open to extract a brand new, slick, and shiny, never-been-used MasterCard.

“And where the hell did you get that?”

“Special offer for impending university graduates.” Dev sneered. If all went well, he’d be graduating in the next couple of weeks. Cam, however, had dropped out the previous year to figure himself out as a rebellion against his parents’ divorce. His mother had fiercely argued against the idea for two months until she gave up and agreed to Cam taking the year off.

“Oh dude. Just say no.” Cam had never been supportive of Dev’s interest in the occult, but this was going to be the last purchase.

Unless this purchase worked. And Dev knew it would.

Dev placed all his hopes and dreams on the fact that this was going to work.

Dev couldn’t wait to open up his latest acquisition.

When he and Cam had arrived at Dev’s house, all he wanted to do was rush up the stairs to hide out in his bedroom, tucked away from any distractions or family drama, intent on inspecting his newest possession. Well, any distraction other than Cam, who had accompanied him home.

Instead, as Dev started up the stairs, looking back over his shoulder to ensure Cam was following, he careened into his sister Amna.

“Ugh, you oaf!” Amna shoved him backward, pushing him into Cam. “Oh! Whatchya got in the bag? It looks like it’s from that witchy store you like!” Amna slid a finger into the bag to pull it towards her to inspect. Dev pulled his prized possession towards him.

Cam, however, wasn’t keeping up. He’d wandered into the kitchen. Cam was playing nice.

“Hi, Mrs. Khandelwal.” Dev’s mom loved to cook and proudly fed her family traditional meals. Tonight’s fare, from the smell of things, was Rogan Josh. Dev hated curry with a passion. He wasn’t fond of lamb either and the two together were wretched. He decided going out for fast food was a better alternative.

“Cam,” Dev ground up his face with displeasure, “let’s go.”

Cam shot daggers back at Dev. He shook his head, rolling his eyes as he returned his attention to Dev’s mom. “Nice sari!” Cam smiled. “Later, Mrs. Khandelwal.”

Upon entering Dev’s room, Cam flopped onto the bed and began examining his too-long fingernails, preening them while lying on his back. Cam’s shoulder-length sandy-brown hair, which had a slight wave to it and a multitude of natural blonde and auburn highlights, splayed out behind his head, making his pose look model-esque. His three-days’ worth of stubble added to that. Dev would never have used the description of “male model” in front of his lifelong pal. The last thing Dev wanted was to feed Cam’s ego. Cam’s head filled most spaces he inhabited.

“Get your damn boots off my bed.” Dev slapped Cam’s feet.

“Oh my god. Yes, Mom.” Cam toed off the designer rainbow-snakeskin boots. The thud, thud ricocheted in the tiny bedroom.

“What are those things made of? Lead?” Dev quipped in response to their noisy removal.

“That’s the sound of a quality product, bitch.” Cam gave Dev the side-eye. Dev caught the glance. They glared at each other for all of a second, then burst into laughter.

He continued to stare at Cam, who returned to plucking away at some unseen dirt beneath a thumbnail. He had to admit, Cam was too handsome for his own good. They had known each other since grade school and had been, for the most part, inseparable. Dev had stood by idly as Cam used his good looks to get what he wanted. Not that Dev would describe himself as ugly. Far from it. But between the two, Cam always got the good-looking guys first, and that encouraged Cam to parade around, flaunting his beauty.

Dev had invited Cam to tag along on his afternoon shopping excursion. The out-of-the-way pagan store, Magix & Mystix, held all sorts of goodies, most of which Dev couldn’t afford, hence the credit card, but he’d had his eye on this particular object for the last couple of months and had squirrelled money away like a miser in order to afford it. All that saving, though, still hadn’t amounted to the amount of cash required.

But his luck had changed when a kiosk from a local bank had opened in the Student’s Lounge at the University. The handsome, bicep-bulging booth occupant, wearing a shirt obviously a size too small, promised an enticing introductory percentage rate on the credit card, stating the bank offered the cheapest one in the city. And with this purchase from Magix & Mystix in mind and the desperation to get his hands on it, Dev signed the credit card contract in a heartbeat.

All the way downtown, and during their short walk to the store, Cam had proclaimed he was being led through the seediest parts of Edmonton’s dark alleyways on their way to make the purchase and complained often about how they were going to be robbed, stabbed, or murdered in some grisly fashion.

None of that had happened.

But Dev had finally got his paws on the summoning board, and as he pulled the rectangular box out of the store’s signature black paper bag, his stomach tensed with excitement. The coveted item had a silver pentacle stamped in the center with one word superimposed over top. 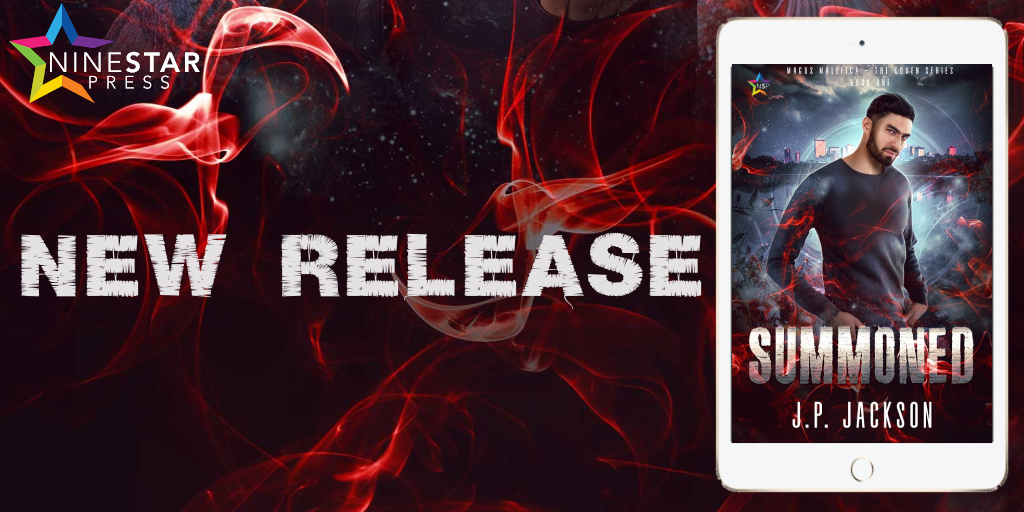 J.P. Jackson is an award-winning author of dark urban fantasy, paranormal, and even paranormal romance stories, but regardless of the genre, they always feature LGBTQ main characters.

J.P. works as an IT analyst in health care during the day, where if cornered he’d confess to casting spells to ensure clinicians actually use the electronic medical charting system he configures and implements.

At night, the writing happens, where demons, witches and shapeshifters congregate around the kitchen table and general chaos ensues. His husband of 22 years has very firmly put his foot down on any further wraith summonings and regularly lines the doorway with iron shavings and salt crystals. Imps are most definitely not house-trainable. Ghosts appear at the most inopportune times, and the Fae are known for regular visits where a glass of wine is exchanged for a good ole story or two. Although the husband doesn’t know it, Canela and Jalisco, the two Chihuahuas, are in cahoots with the spell casting.

J.P.’s other hobbies include hybridizing African Violets (thanks to grandma), extensive traveling and believe it or not, knitting.