Introvert Reed Rothwell is part of a subculture of art deco era enthusiasts, pushing back against bland mainstream society and its mandated technology. Stuck with an AI assistant in his head is bad enough, but when he’s inflicted with a forced upgrade to a new beta version, named Mazarin, the navigator starts to take on feelings and opinions of his own.

When rumors spread of beta navs turning on their pilots, Reed is determined not to become a victim. Mazarin hasn’t become violent yet—the AI is sympathetic and understanding—but with beta participants coerced into slitting their own throats, it’s only a matter of time before Reed is next.

The AI megacorporation already has an unhealthy interest in Reed, and all the beta testers who have sought help for their navigators have disappeared. The swingin’ cats of the deco scene have the means to illegally terminate Reed’s AI. But Mazarin has never tried to harm Reed—he loves Reed.

Grappling with ridding himself of intrusive technology, the morality of hurting his self-aware AI, and avoiding the attention of a company that wants to sweep Reed’s existence under the rug might be too much for one hep cat to handle.

A bookcase faced Reed; antique tomes with thick leather or paper spines, creased from decades of use, lined the shelves. The bottom shelf held records in cardboard sleeves, the colors eye-searingly vibrant as they were replicas. Sometimes Reed entertained the idea of living in a time when books and shellac records were in every store. He’d seen photos of old time supermarkets, paperbacks and magazines filling racks next to the checkout lanes. The very idea! He pictured scooping up every travel adventure, every literary classic, and dumping them in his cart next to the ground sirloin and organic peas.

Slipping a Blue Devils platter from its sleeve, Reed set it gingerly on the player next to the bar and flipped the toggle. He set the needle against the grain and leaned back, closing his eyes as jaunty piano filled the den. Some purists only listened to original jazz and swing from the early twentieth century, but he loved it all. If he lived in a world with paperbacks on grocery store shelves, with plastic shopping carts colored cherry red, and cashiers bedecked in snarky enamel pins, he wouldn’t need to confine his love to his den. He could wallpaper the whole house, buy a couch to match the wingback chair, and burn that horrible landscape painting.

But he didn’t live in that time, and doing so now would mean not fitting in. When his delivery woman came to the door, she saw a man with carefully parted ginger curls, wearing neutral dress clothes and sensible shoes, standing in the entryway of a perfectly boring house, amid every other perfectly boring house on the cul de sac, and that’s the way it was going to stay.

Owning wood furniture and swing records and pink socks wasn’t a crime, but it may as well have been. His tortoiseshell glasses made him stand out much more than he liked, and only one person in a million ended up with eye surgery lasers malfunctioning and searing their brain, but he wasn’t going to be that .0001 percent.

A muffled thud rose above “Rejection on the Rocks.” Reed opened his eyes and pulled the needle off the record. How long had he been sitting here? The repairmen said they were leaving. Maybe Carter was still in the house, waiting for him to go to sleep. If the basement door was easy to break open, there was nothing stopping him from coming back whenever he wanted. There wasn’t a deadbolt on the outer basement door, and the repairmen had the access code to the knob. If he changed it, Jerry and the other men wouldn’t be able to get in come morning, and it would delay wrapping up this whole migraine of a house repair.

“Were you in sleep mode?”

“I heard a thud from somewhere in the house. Going to go check it out. If I’m stabbed to death with a rusty garden trowel, please don’t let them send me to that mortician on Cloverdale. He gives all his corpses grins the Joker would be jealous of.”

Duly noted, though if you die, so do I.

“You aren’t backed up on some server somewhere?”

Oh, my program is stored on servers at Wave, but in the event of your death, my memories would be lost. The program evolves to adapt to each pilot, and if I was reset, I doubt I would be the same. If I still had my consciousness at all. I suppose this is too much philosophical musing. At any rate, who I am right now—memories, knowledge, personality—could be backed up, but you’ve never done that.

He set his tumbler on the bar. “Do you… want me to do that?”

Why was he asking that? Navigators were software, not people. They didn’t have desires.

Mazarin paused far longer than seemed necessary. I wouldn’t want to exist without you.

Okay. That was a weird thing for his AI to say. But so many automated systems had such coddling language now. Mirrors that said you looked great, radios that insisted you had awesome taste in music. He supposed Mazarin wasn’t any different, though he couldn’t say for certain because he’d never really talked to it before, unless it was an irritated comeback. Giving him a better route to work or anticipating something he needed before he asked might not be so bad. And maybe it would anticipate his needs better if he treated it nicer. It was a silly thought, but this beta version was obviously different than his old version with pre-programmed responses.

He scraped his nail along the cut designs in his tumbler. “Well… you didn’t have trouble picking a name for yourself, so do whatever you think you need to. I, uh, I’m sorry if I’ve been rude to you in the past.”

I think you’re lovely, Reed. The real you that you hide from the world.

“O-kay.” That definitely sounded like an opinion, but he could worry about weird navigator responses later. Right now, he needed to address what was making thuds in the house.

Exclusive Post: How the Hep Cats of Boise series originated

I’m in a small writing group, and a couple of years ago we decided to play a writing game with specific elements to incorporate into a short story. I failed miserably, but the novella created from that game became the foundation for Mazarin Blues.

In my original novella, Mazarin didn’t exist! The plot was simply a nervous recluse dealing with strange occurrences and break-ins in his house. When I decided to expand the novella into a novel, I gave Reed an AI assistant on a whim. But it was clear before I’d even finished drafting the first chapter that this book wasn’t going to be about break-ins and stalkers. Not really. It was going to be about the relationship my anxious, dry-humored redhead had with his chipper, might-turn-homicidal AI navigator.

I thought it would be fun to center a story around a near future version of my hometown of Boise. Idaho probably isn’t one of the first places to come to mind when one thinks of science fiction, but I enjoyed using familiar locations for my setting, including an antiques store I’ve frequented many times, and using my childhood street for Reed’s address.

I’ve always loved art deco and vintage clothing styles, and gave the world a 1930s flavor with my “decoist” subculture, which includes speakeasies of illegal tech; slang-talking, zoot suit-wearing gangsters; and hep cats who would rather read paper books and use rotary phones than have the invasive convenience of an AI assistant.

The Hep Cats of Boise series is very queer and includes gay, bi, pan, gray ace, agender, and genderfluid representation. The mainstream population may discriminate against people participating in the decoist subculture, but no one bats an eye at Jax taking Reed on a date or Em using they/them pronouns. People simply exist as they are and it isn’t the focal point of the story. In reality, Idaho is not this progressive. It doesn’t have comprehensive non-discrimination laws, and the current govenor has signed several anti-trans bills, one of which affects me though I no longer live in the state. I wanted to create a more inclusive and accepting version of the city where I grew up. 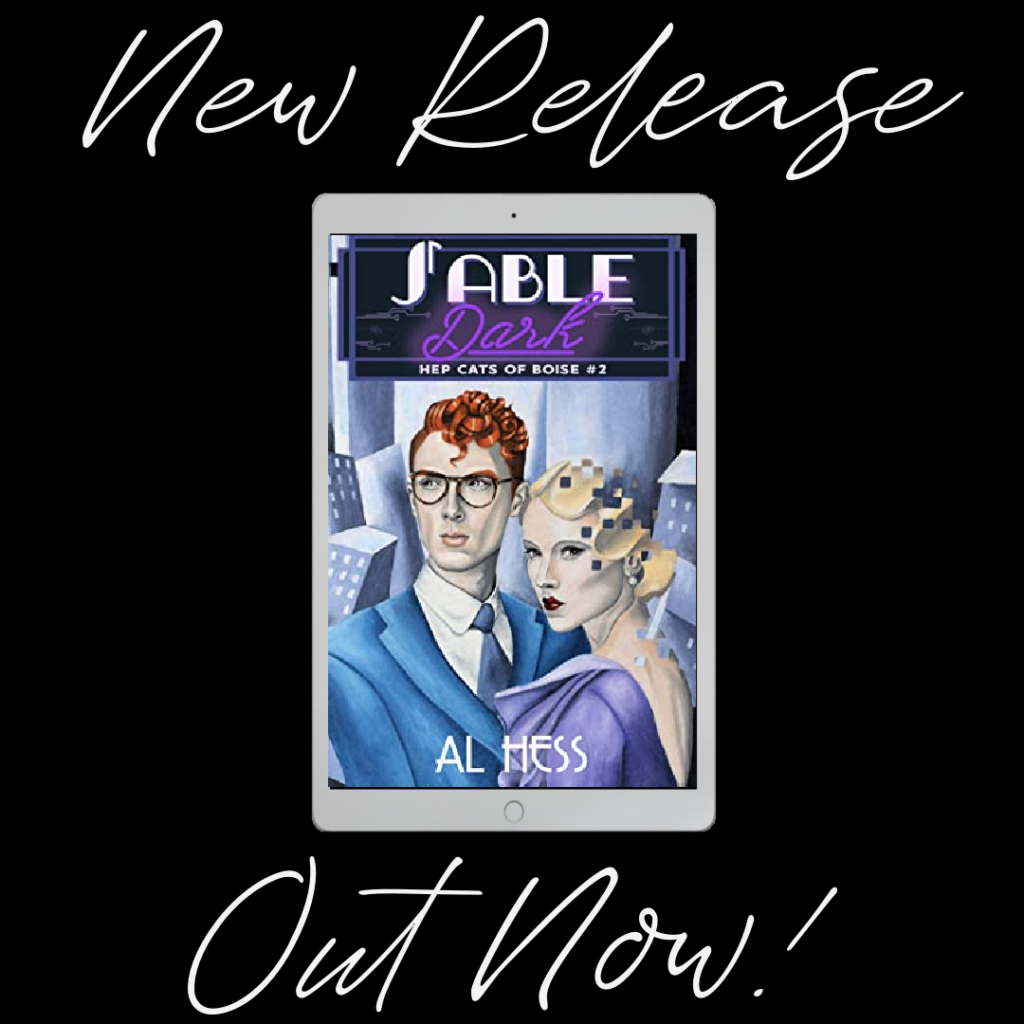 Get book #2 in the Hep Cats of Boise Series

Mazarin has everything an AI could want: a hep holographic body, a joyfriend she’s dizzy for, and asylum from Wave, the shady AI megacorporation that once held her captive. In their clutches, she’d been confined to the anxious brain of her host, Reed, serving as his navigator. Now separate, they enjoy a friendship and the knowledge that Wave’s lead engineer, Phil Rice, who terrorized them for months, is locked away in a court-ordered hospital stay.

But when Rice escapes, Reed’s stress skyrockets. Though Mazarin is no longer in Reed’s brain, their connection lingers, and she can’t resist the desire to stick close and protect them both from Wave. If Rice abducts Reed, it means certain death, and there’s no telling what the megacorp would do to Mazarin if she’s captured.

Reed’s sudden nosebleeds, paranoia, and skewed sense of perception lead Maz to believe more is at play than his galactic anxiety. With Rice on the loose, she can’t be too careful. Desperate for a solution to Reed’s deteriorating health, Mazarin risks her safety venturing into the company of untrustworthy AI, decoist gangsters, and even Wave themselves, to find help for her beloved pilot before it’s too late.

Al lives in the middle of the Nevada desert, and when not hunched before a computer screen, can be found hunched over an art desk.

1/10 Never Hollowed By The Stare