Series: The Verge, Book One

Dr. Aristotle Campbell is a desperate man. His twin brother has been abducted, and Ari will do anything to find him. Forced out of the comfortable solitude of his laboratory, Ari must leave their home world of Britannia and search the farthest reaches of space for his other half. He hastily equips himself with a flawlessly tied cravat, a handful of clues, and his small science vessel. Now, all he needs is a pilot to get him across the Verge, a barrier separating the civilized world from ungoverned space.

Pilot Orin Stone is a desperate man. No ship, no pay, no prospects. He spends his days barely scraping by in the rough colonies lining the Verge interior. When he gets an offer from a frantic, upper-crust professor in need of a pilot, he has no choice but to take the job. He just can’t believe it when the professor turns out to be the most gorgeous man he’s ever seen and that his offer includes a ship of Orin’s own. If Orin can keep his heart (and other portions of his anatomy) from leaping every time sweet, innocent Dr. Campbell looks at him, this should be his easiest job yet.

Rugged Orin and aristocratic Ari work together to navigate the lawless areas of space beyond the Verge, soon discovering that they work well together in all areas. Their immediate and intense attraction to one another is an obstacle to their plans that neither saw coming. More than sparks will fly when they break through the force field and enter restricted space, all alone together for the perilous journey, leaving barriers to their growing attachment far behind.

In their search across the stars, can two desperate men find their home in one another?

Chapter One
“You want me to do what?”

Ari straightened his shoulders, hands folded together on the table between them, suppressing a wince as his skin stuck unpleasantly to a thick smear of residue best left uninvestigated.

Somewhere behind him the sound of glass breaking was followed by a bowel-shaking roar, a meaty impact, scuffling sounds, and hearty guffaws.

He sniffed quietly, regretting the action as the odor of stale beer and unwashed bodies assaulted his senses. Forcing himself to meet his companion’s bored regard, he cleared his throat before speaking in as firm a tone as he could manage.

“In the interest of saving both of our time, I’ll cut to the chase. I require a pilot capable of navigating uncharted areas with immediate availability and a willingness to negotiate a flexible pay schedule.”

Mr. “Call me Orin, honey” Stone slumped back in his seat with careless, sprawling grace, the edge of one enormous scuffed leather boot sliding across the floor to rest a millimeter away from the polished black toes of Ari’s spats.

“So, just so we’re clear— You’re asking me to find you a pilot ready to jump right across the Verge into the deepest, slimiest dark, for—and this is the bit that really sticks in my throat, pumpkin— You want me to find you some sap willing to do all that for, apparently, no pay.”

“You’re cute, sugar. But you’re off your rocker.”

Ari’s chair scraped against the floor as he jolted forward in his seat, one hand closing around the fraying cuff of Orin’s greatcoat.

“This is a matter of utmost urgency. My brother is—” He paused to clear his throat after an embarrassing crack in his voice. “My brother is missing; he has been abducted by an Outlier fiend, and I am utilizing every resource at my disposal to ensure his safe return. My inquiries led me to you, with the assurance you could facilitate a jump with immediate effect. Now I demand that you either provide said assistance, or you cease wasting my time.”

Orin fixated on the white-knuckled grip holding his sleeve. The coiled strength of his thick forearm underscored Ari’s awareness that he could break free at a moment’s notice with very little energy expended.

“What kind of resources are we talking, here?” Orin’s eyes narrowed under a heavy brow, the sweep of space-black lashes unexpectedly elegant against his brutish visage.

Ari drew a long breath, attempting to steady his resolve.

“I possess a three-year-old Xalanthe Explorer model 953V. It is in exemplary condition, and I am prepared to offer it as payment upon my brother’s safe return to our home on Britannia.”

Before he finished speaking, Orin sat up in his chair, the full extent of his imposing size suddenly evident even while seated. He turned his hand in Ari’s grip, long fingers wrapping easily around his thin wrist.

“You’re trading your ship. A brand-new ship. To any asshole willing to fly it? Just to finish a little game of hide-and-seek with your brother who—no offense, Red—sounds like he ran off with a bit of strange?”

Aristotle bristled, slim shoulders rising to his ears as the heat of an angry flush spread from the unfortunate ginger of his precisely parted hairline down to the white of his starched collar points.

“He did not ‘run off’! He was abducted. I have no more time to waste with your nonsense, sir. Are you able to assist in my endeavor, or shall I continue pursuing a pilot on my own?”

A lopsided grin spread across his companion’s face, revealing a hint of prominent canine and a surprisingly charming set of dimples. Orin gave another insolent sweep of his gaze, ticking to the length of Ari’s throat rising above his cravat. The rumble of his voice dropped low enough that Ari had to strain to hear him above the surrounding chaos.

“Hmm, that depends, Red. That blush go all the way down?”

The clatter of the cheap aluminum chair against the cracking concrete floor was lost in the cacophony of raucous laughter, clinking glasses, and blaring synth music that characterized drinking establishments on the rough ring of colonies lining the Verge. Ari wrenched his arm away as he stood, breaking free.

He turned his back, adjusting his waistcoat with trembling fingers as he wracked his brain for alternative solutions. He had only taken a half step away from the table when a firm grip on his coattails wrenched him backward. He swung around, fists in a pugilist’s stance, raised to the smiling face of Mr. Stone.

“Whoa now, slow up there, professor. If you’re wanting to trade a whole damn ship for the temporary services of some sleazy sack of shit with a pilot’s license, I got just the guy you need.”

Knees weak with relief, Ari nearly attempted to sit before remembering he had overturned his chair, which was now likely glued to the filthy floor of the saloon.

“Excellent. Where can I find this person?”

That lopsided grin opened up into a full-blown smile, revealing rows of white, uneven teeth. “You’re looking at him, sweetheart.”

Ari twitched at the endearment, unaccustomed to the way they seemed to drip from the pilot’s every phrase like butter melting off the plate.

He turned fully to face him, coattails twining around his narrow hips as Orin maintained his grip, tugging once with a waggle of thick brows at Ari’s resulting unintentional pelvic thrust before releasing him with a flourish.

Orin pushed off from the table, broad shoulders rising up and up to just above Ari’s line of sight. Ari swallowed an obvious comment on the pilot’s intimidating height, realizing how much he’d underestimated the man’s size.

Ari stared straight ahead at the hollow of Mr. Stone’s throat, bronze skin left exposed by the open vee of his collarless shirt. A few dark, curling hairs peeked out of the opening, inches from Aristotle’s nose. A strange fluttering sensation swept through his abdomen at the sight.

Recognizing the sensation as inappropriate at best and disastrous at worst, Ari turned on stiff legs and led the way out of the saloon, doing his utmost to avoid brushing up against the rough clientele. Heads swiveled to follow Ari even as they ignored the much larger figure of Mr. Stone following close behind his every step.

Ari ducked his head as they emerged into the daylight, squinting against the intrusive brightness before heading off toward the nearest dry dock, zeroing in on his ship after a few minutes’ walk. Mr. Stone was a silent shadow at his back, footsteps shockingly light for a man of his size.

The small exploratory vessel stood out among the busted-up freighters and speeders cluttering the dock. Clean panels of riveted steel shaped the subtle curves framing the centerpiece—a large frontal view screen. The only unnecessary ornament was that of the exaggerated dorsal fin, the sight of which had caused Aristotle’s brother to laugh out loud when they first purchased the ship.

Mr. Orin Stone was circling his ship, one hand, large and square as a shovel head, trailing long fingers over the surface with surprising reverence.

He directed his inquiry to the ship but turned to Aristotle as though expecting an answer.

Ari cleared his throat. “As I have previously mentioned, it is a Xalanthe—”

Orin cut him off with a rude sound pushed between full lips. “She.”

Ari opened his mouth to reply, mistaking a brief pause for the conclusion of the pilot’s statements.

“Ship’s a she. And she’s a pretty little thing, deserves a name. If you don’t have one for her yet, I can think of something fancy to call her. Something with a bit of glitter to it. Little lady like this one deserves to shine.”

His eyes in turn glittered at Ari, sparkling with amusement and apparent satisfaction upon viewing the small science vessel.

Without looking away, he spat into one rough palm before holding it out to Aristotle as if to shake.

“You’ve got yourself a deal, Red.”

Ari recoiled from the offered hand, curling his own into protective fists at the notion of sealing a verbal contract with an exchange of bodily fluids.

“That is the most disgusting thing I have ever seen.”

Orin’s throaty laughter rang out against the polished metal panels of the ship exterior, echoing across the shipyard.

“Is it now? Well, stick with me, sugar; I could really expand your horizons.” 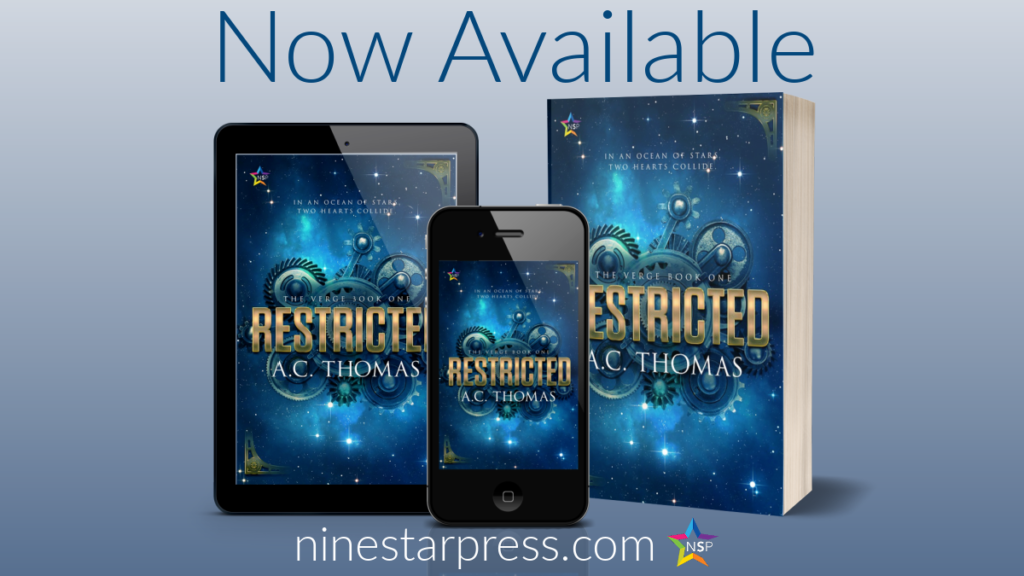 A.C. Thomas left the glamorous world of teaching preschool for the even more glamorous world of staying home with her toddler. Between the diaper changes and tea parties, she escapes into fantastical worlds, reading every romance available and even writing a few herself.

She devours books of every flavor—science fiction, historical, fantasy—but always with a touch of romance because she believes there is nothing more fantastical than the transformative power of love.