Title: Damned If You Don’t

All Erabus ever wanted was to stay out of his brother’s way, to let him become king after their father, and spend his life hunting in the forest outside the kingdom. That all changes when he uncovers the plot to kill his father. Erabus will do whatever it takes to save him, even forming an alliance with a strange ally named Xicuz—an incredibly gorgeous satyr he met in the forest.

If things aren’t complicated enough, Erabus soon finds himself tangled up in a deal with a devil that puts the lives of the people closest to him in danger. He learns that sometimes you have to fight fire with fire and makes a deal of his own—one that will save the love of his life, but forfeit half of his own to do so.

Excerpt
Damned If You Don’t
Hairann © 2020
All Rights Reserved

Warning: This excerpt may contain sexually explicit material, please proceed at your discretion.

The sun only just began to rise as Erabus made his way through the thick forest, his footfalls inaudible on the damp leaf-carpeted ground. He held his bow with an arrow notched and ready to fire as he navigated around one cluster of trees and then another. The sounds from the other hunters faded into the distance. They made far more noise than they should if they expected to catch anything.

Putting the far less skilled hunters from his mind, he paused to sniff the fresh forest air, filling his nose with the strong scents of pine and moss. He smiled at how the scents calmed him and continued in search of any deer that might have passed through the area recently. Though if the others continued to rustle around and break branches, he doubted they would remain in the vicinity for long. Erabus tuned them out once more as he crouched to the ground and removed debris from an indention in the dirt.

He traced the imperfect print with the pad of his index finger. Deer or perhaps a goat down from the mountain. The print didn’t cause a deep enough indent to tell for sure which. The only thing he was confident about was the freshness of the print. With any luck, the animal would still be nearby, and Erabus was determined to catch it before the others could alert it to their presence. Careful to walk on the pads of his feet to reduce what little noise he made, he followed the prints farther into the forest until he heard the rustling of leaves coming from the other side of a cluster of trees that grew so close together he couldn’t see through them.

He parted the branches as much as he dared, waiting only long enough to spot the horns before carefully releasing the branch and taking aim through the trees. Though his target wasn’t visible from his current position, he knew roughly where the deer stood and took aim to the right and down a bit from where its horns should end. He inhaled as he pulled the string taut and released the arrow at the same time as his breath. The arrow pierced the air with an audible whoosh.

The gentle thud of the arrow striking wood came only a moment before a voice called out in alarm, startling Erabus. He barely caught his bow as he dropped it. Had another hunter made it out farther than I realized? But he’d seen the horns. Confused, he shouldered his bow to investigate when a voice called out, “Watch what you are doing!”

“I’m so sorry, sir. I swear I saw horns,” Erabus insisted as he fell through the thicket. He took a moment to right himself before turning his eyes on the man he came inches from shooting. Only it wasn’t a man standing before him. A foot away from where his arrow struck the tree stood a creature with the body and face of a man but the legs, hooves, tail, and ears of a goat. Most importantly, the horns of one too.

Staring at him in shock, Erabus gave him another once-over, noticing for the first time the loincloth that covered his lower bits from his view. He barely managed to squeak out a stuttered, “You’re…you’re a…” before snapping his lips closed once more when he realized his mind refused to supply him with the words he searched for.

The being before him smirked before offering in a deep, warm voice, “The word you are looking for is a satyr. It’s a good thing you are as bad a shot as you are a speaker.” Erabus glanced from the satyr to where the arrow stood embedded in the tree behind him. He realized just how wrong he was. It was true his arrow missed him, but he had not been the target.

“Look again, sir, my aim was true,” Erabus said, his confidence returning. “If you were a deer, as I first thought, the arrow would have struck between your shoulder blades.” He crossed his arms and gave him a smug look.

The satyr’s silver eyes widened as he looked at the arrow. “It is a good thing I am not an animal then. Though how you ever confused these beauts with deer antlers, I will never know.”

Erabus looked at the satyr’s horns once more. The satyr was right.

Where a deer’s antlers would have been large and branched out in every direction, he had two single arches on either side of his forehead, larger and thicker than a mountain goat’s. There was no excuse for his mistake—he should have looked more carefully before he shot. However, he wasn’t willing to admit it.

“You should be careful, sir. You shouldn’t be wandering around in the human hunting area.” It wasn’t right to blame his mistake on his near victim, but in his embarrassment, Erabus couldn’t stand the thought of shouldering all the blame himself.

“Actually, sir,” the satyr countered, his sir sounding an octave higher than the rest, “you have crossed over into the land designated for the satyrs when our kings met ten years ago. It is you that should be careful.”

It took him a moment to compose himself. Was the satyr threatening him? He doubted it but couldn’t be sure. Erabus opened his mouth to insist he would have known if they crossed the border onto their land, but his words caught in his throat at the sound of the hunters’ voices coming from the other side of the trees. Some bragged about the game they caught others complaining about, being unlucky in their hunt.

One called out for him, no doubt wanting his help to carry back their game as opposed to being worried about his absence. The hunters would soon overtake them, and they would not react well to finding a satyr on “their” land.

Erabus slapped a hand over the satyr’s mouth and pushed him back against a tree, hiding the two of them in the shadows. He pressed his lips close to the satyr’s pointed goat-like ear that twitched as Erabus’s breath tickled it with each whispered word. “Do not make a sound unless you want the hunters to find you.” Erabus glanced over his shoulder, barely able to make out the hunters as they made their way passed their hiding spot.

Erabus sighed in relief once the last of them disappeared back into the forest, heading toward home. He waited another moment to be sure before he turned back to the satyr and found his face an inch or two from his own. Erabus swallowed hard when he realized how close his lips were to his own, with only his hand separating them.

Before he could find the words to assure him it was safe now, something hot and wet dragged across his palm. He jumped back in shock. “You licked my hand!” he accused in disbelief, staring down at the moist spot on his palm.

The satyr smirked. “Would you prefer I licked something else instead?” He licked his lips and looked Erabus up and down.

Was he serious? Erabus began a stuttered reply, but he was saved from having to give an actual answer by a horn blowing in the distance.

The satyr sighed in disappointment before glancing off in the direction of the horn. “Alas, I shall not be able to hear your answer this time, sir.” He gave him a slight yet exaggerated bow before smirking at him again. “Next time then.”

Erabus didn’t know if he said it as a parting or in reference to when he would be getting the answer from him. Before Erabus could respond, the satyr disappeared into the forest. 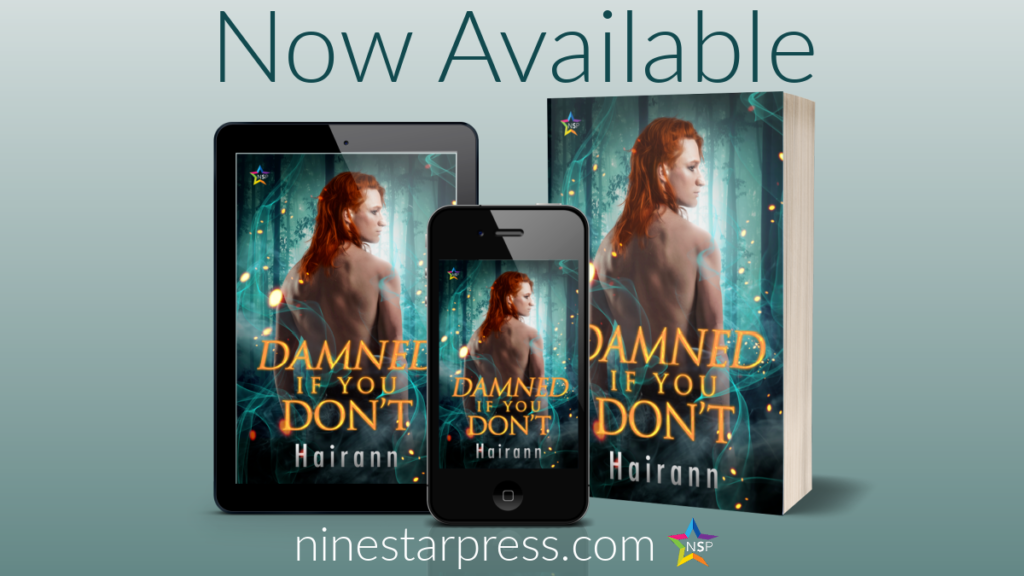 Hairann is the author of the Outlaw Seven series. She is an out and proud Pan who lives with her amazing family in Montreal. She’s worked as a ghostwriter on Fiverr since 2018 and has an Associate’s degree in early childhood education. She invites you to follow @AuthorHairann on Twitter.