Legacy of the Assassins, Book 1

A witch, a human, and a werewolf. Three men connected by love, but two of them have never met, until now.

After losing his family and coven six years ago, Felix was finally happy again. He has a job he‘s good at, two boyfriends who love him, friends, and a place to call home. That is, until a mysterious stranger brings a job into the Assassins Guild where he and his lover, Ryder, work.

On paper the job is simple, take out the sorcerer who heads the most powerful dark magic church in the country. But magic is never simple, and Ryder and Felix enlist the help of a ragtag group of unlikely heroes, including Felix’s other boyfriend Luka, to complete the job before time runs out.

Will Luka and Ryder see what Felix has always suspected? And more importantly, will they be able to accept it, and each other?

*Blood Oath is Book 1 in the Legacy of the Assassins series. It is not a standalone and ends in a soft cliffhanger. The story within the book concludes at the end, however, the bigger story continues in Books 2 and 3, which are be available for preorder. This book is an urban fantasy/paranormal m/m romance story. It contains a polyamorous relationship and no cheating. 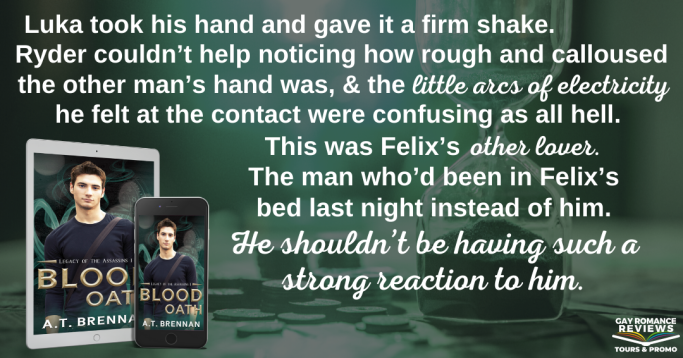 They lay together for a few minutes, enjoying the afterglow, but it wasn’t long before Felix began fidgeting in Luka’s arms.

“What kind of trouble?” Luka asked.

He didn’t know Ryder, had never met him, but he didn’t understand Felix’s connection to the man. Other than them both being assassins, they had nothing in common. Ryder had been born a citizen. He might have willingly given up his privileges when he joined the guild, but he’d grown up as part of the population that actively oppressed, not to mention hunted and killed, not only his kind but Felix’s too.

“The kind that can kill him,” Felix said with a sigh.

Luka listened as Felix filled him in on what had happened in the last week, and to say he was shocked was an understatement.

“I’m sorry I wasn’t there.” He pressed a kiss against Felix’s temple and sighed.

The thing he hated most about his condition wasn’t the physical and mental strain of the shifts or having to constantly live in fear and always stay on the move. It was how he was constantly letting Felix down when he needed help.

“That’s not what this is about, and you know it.” Felix looked up at him, his eyes serious.

“What can I do?” he asked after a pause. “By the sound of your plan, you could use some help. I’m not an assassin or a thief, but I’m a hell of a fighter.”

His condition did have a few perks, if they could even be called that, considering the trade-off. He was naturally big and strong, and his instincts were sharper than anyone he’d ever met, human, magic, or wolf. His reflexes were heightened, he could hear and see things no one else could, and his sense of smell was unmatched. None of that helped him in a physical fight, but his preternatural strength and uncanny speed certainly did.

“If you’re willing, we could definitely use the help,” Felix said, a smile lighting up his face. To celebrate the Blood Oath’s release, we are giving 3 lucky winners the chance to win an e-copy of your choice from A.T. Brennan’s published works!

A.T. Brennan, a native of Ottawa, Canada, has always had her head in a book and a story to tell. A veteran of the Canadian Armed Forces and current entrepreneur and author, she enjoys spending her days working on her many projects and her nights writing and not getting enough sleep. She currently lives on Canada’s East Coast with her kiddo and cat, and enjoys collecting shoes and exploring the different aspects of romance in her works. She also publishes erotica under the name Mandie Mills.