Elsenna Hazen left spaceport security and ended up a royal bodyguard. She should have known better than to fall in love with a princess.

It’s been two years since one ill-advised kiss in the garden pulled them apart. With uprisings in the streets, the nervous princess transfers Elsenna back into her service. Her Highness has no idea Elsenna is leaking data to the revolutionaries bent on overthrowing the princess’s oppressive father.

Now Elsenna wakes up each day wondering what will happen first: her own execution, or that of the woman she could never stop loving. When rebel attacks escalate and the king plans retaliation, Elsenna discovers that the fights for her love and her life are one and the same.

It had been difficult that morning to fit treason in around my duties as vice-captain of the castle complex’s security forces. Every professional conversation had taken twice as long as it should have. When His Majesty, the Most Victorious Born on the 24th Day of Winter, the King of Iospary, was finally overthrown for corruption and tyranny, I would not miss the part of my job where incompetent colleagues argued with me.

Of course I wouldn’t miss it because I’d be dead. With so much blood on my hands since the last change in rulers, I had no illusions. My acts of sedition over the last two years wouldn’t save my soul, let alone my head. Not after serving this king for so long.

By the time I won the latest personnel allotment struggle with my overly promoted counterpart in spaceport security, it was almost the middle of the day. I took a short walk outside. Anyone who saw me found somewhere else to be—a common reaction to the combination of my height and my uniform—so I had privacy to drop the latest data packet to the rebels. I used the comm behind my ear to access a secure channel I could only hope stayed that way. While the packet uploaded, I found a terrace where I could look down at the city. The apartment blocks were overcrowded, the hospitals neglected. Businesses paid extortionate taxes to fund the lavish lifestyles of the king and his favorites. Hopefully not for much longer.

Data sent, I returned to the security center, crowded with surveillance screens and too many desks for the small room, and settled down to work.

“Vice-Captain Hazen,” one of the guards said from behind me. “You have a call.”

“I’ll call them back.” Whoever it was, my patience for bullshit had run out, and the duty roster for this week needed finalizing.

“Ma’am,” the guard said again, nervous this time. “It’s the princess. She asked for you specifically.”

The security center went silent around me. Her Highness, the Most Glorious Born on the 13th Day of Spring, the Crown Princess of Iospary, did not personally call the security center. She had staff for making calls, and assigned bodyguards as well.

I’d been one of them once.

Lest anyone think I was hesitating, I transferred the call to my comm. “Your Highness, this is the vice-captain on duty. What may we do for you?”

“Hello, Elsen—Vice-Captain. Are you free for a short conversation? I hope I’m not interrupting anything crucial. I know you have many more responsibilities now.”

I’d thought to go the rest of my days without hearing that voice again. I was grateful I’d learned long ago not to show my emotions on my face. I couldn’t imagine what would be there now. Two guards near the door had gotten up, ready to move in case of an emergency. I signaled for them to stand down.

“Your Highness,” I replied. “Of course.”

“I wish to ask a favor of you, if I may,” the princess began. Then she paused so long I began to wonder if she was making this call in secret, and someone had walked into the room. Or maybe things were this awkward between us after more than two years with no direct contact. “I have heard rumors of disturbances. I hoped you might provide a briefing. In person.”

I needed a deep breath. I tried to take it silently. Here she was, speaking with me for the first time since our long-ago night in the garden, and she wanted news about the movement to bring her father down.

Not that I would want it to be a personal call. The further apart I kept memories of her from my current activities, the better. During my sleepless nights, I already struggled to avoid imagining what might befall her when the end came. That the rebels would distinguish her innocence from her father’s guilt was unlikely; the chance I would be in any position to change that even smaller.

“Your Highness,” I said once I’d composed myself. “I would be happy to arrange for the appropriate royal advisor—”

“No,” she interrupted, polite but firm. “Thank you, but I would prefer to hear from you. If you…would be so kind.”

All three guards were watching me now, curious.

She made a soft noise of disagreement, a sound so familiar, but one I hadn’t heard in what felt like a lifetime. “At your convenience. I have no plans outside my rooms until this evening. Please call when you’re on your way.”

I stared down at my screen again, though the schedule I’d been preparing was now a blur. When those around me concluded they’d get no further entertainment, the regular sounds of the security center picked up again: chairs squeaking, guards talking with others in the castle or stationed around the sprawling royal complex, an occasional cough or frustrated mutter.

The king’s staff could advise his daughter in a way he’d find palatable. Surely the princess would have been steered in that direction if she’d expressed misgivings to her own people about whatever she’d overheard. There was no reason for her to call the security center—to call her former bodyguard—directly.

Unless she was in trouble.

The last time I’d seen her, in a corner of the Fall Gardens after her birthday dance, I’d let my heart get the better of me. I’d held her. Kissed her. Would have done more if not for the chasm between her station and mine.

I put away the unfinished guard duty schedule, stood, and pulled on my jacket.

“Vice-Captain,” Mbala said. “We have a vehicle fire in one of the garages near the outer wall. Fire suppressors are malfunctioning. A truck is on its way, but it’s drawing a crowd.”

I wished I could believe this was one of his practical jokes, but not with how this day had been going so far. “Have Proce take a team over.” My fellow vice-captain could stand to get his hands dirty for a change, even if he was off-shift.

“He’s across the river on a personal errand.”

Damn. We were stretched too thin for me to delegate this. I thought about letting the whole thing burn, but that would draw the wrong kind of attention. “I’m on it.”

If the princess was in trouble, hopefully it wouldn’t get worse over the next few hours. 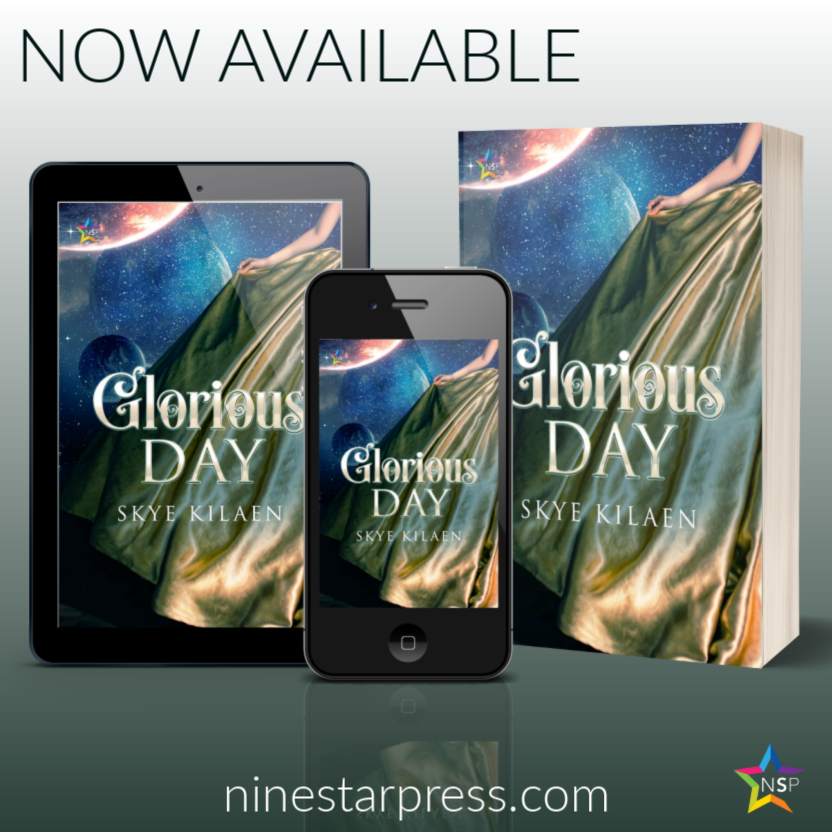 Skye started writing fiction in elementary school on a Smith Corona electric typewriter because that’s all people had back in the early 1980s. She didn’t realize she wanted to read and write romance until much later, when it finally dawned on her that she adored X-Men comics for the soap opera aspect as much as for the superpowers.

Now she writes queer romance, both contemporary and science fiction, that is mostly F/F and F/M with queer main characters. Her work is sometimes polyam and usually at least a bit geeky. After all, she does some of her writing in her local comic book shop.

She is bi, and she currently lives in Austin, Texas because of all the libraries and breakfast tacos.