Title: Too Close to the Flame

Can he ever learn to trust again?

Brandon Weber’s old boyfriend almost beat him to death. Brandon survived, but still bears the emotional scars. Eighteen months later, he has withdrawn into himself, convinced he’ll never be able to trust another man.

Devin Macadam, fresh out of law school, has an exciting new job. He is also on the lookout for just the right guy, someone to take care of and love.

When Devin shows up for the first day of work at his new office, he meets Brandon, a legal assistant there. Sparks fly, but Brandon is paralyzed by fear and isn’t about to give another man the power to hurt him again. Devin, never one to give up easily, doesn’t want to take no for an answer. Both men feel the magic, but can their relationship ever get past the friend zone?

Too Close to the Flame is a dark-to-light, sweet romance featuring out and proud gay men, lots of feels, steamy love scenes, and a wonderful happy ending. The book is approximately 86,000 words and has X-Ray enabled for your reading pleasure.

Trigger Warning: Too Close to the Flame contains specific memories of physical abuse.

I raced into the kitchen like a madman, afraid that something was on fire. Acrid, gray smoke billowed out of the toaster, and I barely kept from yelling in frustration. Everything was going wrong this morning. My alarm hadn’t gone off, the water in the shower was cold, I cut myself shaving, and my best blue suit had come back from the dry cleaner with a stain on the lapel.

After unplugging the toaster, I used a fork to coax out the pieces of charcoal that used to be a bagel. Damn it!—it was the last one. Now I’d have to take time to scramble eggs, because there was no way I could go to my first day at a new job on an empty stomach.

Returning to the bedroom, I decided my gray suit would have to do. A white shirt and maroon Hermès tie made it look better than it was, and I wore my black cap toe oxfords. They were comfortable and looked great with the suit. Another glance in the mirror and I headed back into the kitchen, where I barely had time to cook and inhale three eggs. The drive to the office had taken about fifteen minutes when I did a practice run a few days earlier, but I wanted to leave half an hour early just in case.

The extra time turned out to be a good thing. Traffic on Massachusetts Avenue was mostly fine, but there was an accident where I was supposed to turn onto 9th Street. I sat for ten minutes waiting to make the turn. “Fuck!” I yelled about five minutes into the delay, and banged on the steering wheel for good measure. I ended the tantrum with a long blast of my horn.

My new job was a good one, and I wanted to do well. I had to be ready to do anything, as soon as I was asked to do it. Furthermore, I had to do a kickass job because I didn’t want anyone thinking I got the position because of my last name. But being the best wasn’t only measured by doing great work. Early and eager were watchwords I needed to live by.

Waiting for the intersection to clear, I thought back over the last few months. When I graduated from law school in May, I felt like I had the world by the tail—law degree, awesome boyfriend, and a job waiting at one of the hottest boutique firms in the nation’s capital. Things changed when I got home from bar exam prep class one day and heard a strange knocking noise in the bedroom. Afraid someone had broken in, I picked up a baseball bat that was leaning against the wall—I hadn’t put it away after our game the night before—and slowly crept through the apartment. When I pushed the bedroom door open, I almost threw up. My awesome boyfriend was riding one of our supposed best friends in the middle of our goddamned bed, his face screwed up in the ecstatic expression I’d thought was only for me to see. He must have heard the door creak, because he opened his eyes and smiled. “Hey, Dev. Want to join?”

Barely resisting the urge to wield my bat on both of them, I left the apartment and went to cry on my friend Jacob’s shoulder. He was a 2L, a year behind me, and was my best buddy since I helped with orientation for his class. After listening to me curse fate for a while, he pointed out that the lease to the apartment I shared with my ex-boyfriend was in my name. After a beer to soothe my nerves, he and I walked back the building where I lived. The ex-boyfriend was gone, so Jacob and I packed up his stuff and carried it out onto the front steps.

A honking horn brought me back to the present. Traffic was moving again, and I made it to the office with five minutes to spare. After introducing myself to the receptionist, I asked for Liam Macadam, my new boss. She made a quick call, but it wasn’t Liam who came around the corner thirty seconds later. An impossibly beautiful man with light blond hair and sparkling, sapphire eyes, put out a hand. “I’m Brandon Weber.”

I took his hand and —whoa!— the spark flew right up my arm. I jerked away. “Sorry. Static electricity?”

We both chuckled but he seemed frozen in place as he didn’t put his arm down. Seeing too good an opportunity to pass up, I reached for his hand again. He widened his eyes and I realized I needed to say something. “I’m Devin Macadam. Today is my first day.”

Brandon broadened his smile and nodded. “I know who you are. I’m Liam’s assistant. He’s running a little late, but he’ll be here soon.”

I gave him a flirty smile but couldn’t seem to move. After a moment, Brandon tugged his hand away. “Why don’t I show you your office and give you a tour?”

The spell was broken, and I quickly put my professional expression back on. “That sounds good. This is a nice place.”

“We like it. It’s an old warehouse, and you should have seen it when Liam and Michael—the first two partners—rented it. The building was a disaster and needed to be completely renovated. I can’t believe it’s the same place.”

A small cleft in Brandon’s chin caught my eye, and it was a few beats too long before I answered. “Yeah, it’s nice.” Oh God, get a grip. He’s a guy, that’s all.

Brandon put a hand on my elbow and guided us down the hallway. I noticed that he moved with an unusual, stiff gait. Three doors in, on the right, he held out his hand. “Here we are.” 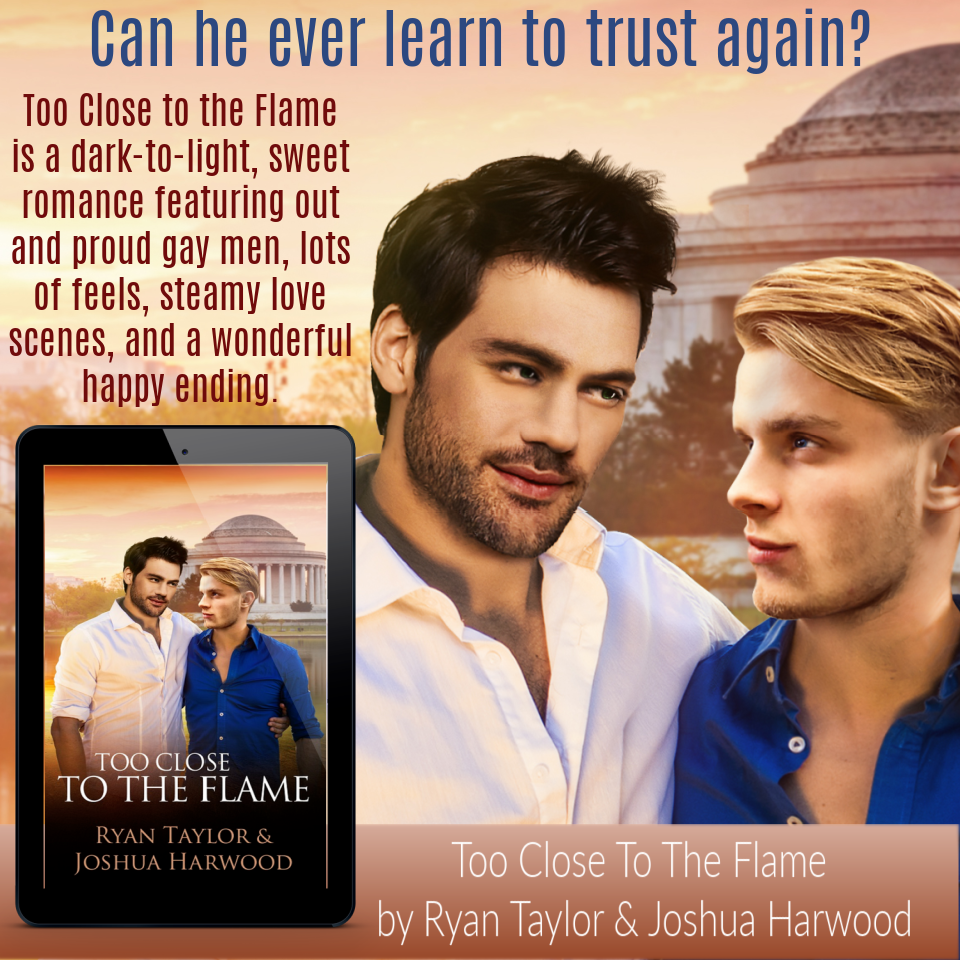 Ryan Taylor and Joshua Harwood met in law school and were married in 2017. They live in a suburb of Washington, DC, and share their home with a big, cuddly German shepherd. Ryan and Josh enjoy travel, friends, and advocating for causes dear to their hearts. In addition, Ryan loves to swim, and Josh likes to pretend he has a green thumb every chance he gets. Both men love writing, and the romance they were so lucky to find with each other inspires their stories about love between out and proud men. You can contact them through their website at http://www.ryanandjoshth.com.