Do you have to be a monster to fight one?

Erin Evanstar is a demon hunter, a protector of humanity from nightmarish predators that feed on people’s fears and flesh. They are settling into their dual life of being a teen and hunting demons.

When a tentacled horror abducts Erin’s partner, José, Erin and their family go on the hunt to get him back. But Erin gets an ultimatum: help the Fallen Angels bring on the apocalypse or watch José die. Erin will do anything to save José, but fighting monsters comes with a grim price–becoming one themselves.

“Prophecies are fickle and convoluted. People tried telling me that for centuries, but I still sought out the most renowned seers, Elven and Human alike. It wasn’t until I miscarried the twins and started having visions on my own did I realize how unreliable an art prophecy is.

Thankfully, the visions faded after I delivered Liam and Lucy because they caused me more stress than anything else.

I could tell Liam this a thousand times, but if he is anything like me, he won’t realize it until he experiences it. Let him follow his dreams until he discovers they are hardly probabilities, let alone definite futures. In the meantime, don’t worry over much of what he tells you. Seeing himself die the same way more than once makes it less likely to happen.”

—A letter from Niben to Seamus Evanstar, confined to the archives shortly after Liam died.

White graduation caps fell from the sky like flakes of vaporized Demon. High school was a beast, and I’d vanquished it like every monster I’d fought, with one exception—myself.

Breathing deliberately, I slowed my perception of time until the caps seemed as if they were falling through cold honey on their way to the ground.

The late-spring sun beat down on me, but a breeze kept the temperature bearable. Some tassels lilted southeast—away from the towering clouds bruising the northwest sky. The weather wasn’t going to hold much longer, but I was okay with that. Thunderstorms awoke something wild in me—a pulse-racing, dance-around-like-no-one-can-see-you kind of wild—a rush of adrenaline almost as good as what I’d get from battling a Troll or sparring with Mel.

With my sense of time slowed down, the distant thunder sounded like a lion purring. The clouds glowed purple as lightning forked through them like an X-ray, temporarily revealing a mass of tentacles undulating in the clouds.

Mel, did you see that? I thought as loudly as I could, hoping my telepathic cousin would hear me.

I’d seen a lot of different Demons in the three months I’d been hunting them, but based on the stories and the Lexicon, the massive tentacled ones only materialized in oceans, and they certainly could not fly. Yet, every time lightning flashed, there they were, waving as if violent updrafts were a gentle breeze.

My heart sped up. My hands closed into fists. Mel didn’t reply.

I shut my eyes, opening my mind so I could feel all the energy around me. Most humans were blobs of buzzing heat, but Mel, a hybrid of human, Angel, and Elf, had a hotter, more intense aura with a spritz of simultaneously depressed and optimistically peppy texture. I found her near my Elven grandmother, who felt like a condensed thunderstorm.

Mel? Niben? Can you hear me? Did you see that?

Of course, there was a good chance they were both shielding. What telepath would have their mind open to other people’s thoughts when there were so many other people around?

One who hasn’t been able to properly shield in months. Mel’s melodic yet squeaky voice was a welcome presence in my mind. Shut down the hyper drive. You’re giving me a headache.

I exhaled over the course of ten seconds, willing my sense of time back to normal.

A garbled din of stretched-out voices morphed to something more akin to a clattering avalanche of pots and pans. A shoulder jostled mine. The corner of a graduation cap crashed into my head.

Erin? What had you wanted to tell me?

There were tentacles in the clouds, I thought at Mel, turning in the general direction I sensed her in.

I crashed into José, who, of course, stood right next to me.

“You okay?” he asked. Tears glistened in his midnight eyes and trickled down his sun-kissed cheeks. One snagged on the crooked tip of his nose. He clutched two graduation caps, his and mine, so tight that the scars on his knuckles were visibly stretched.

“Yeah. Are you?” I wondered if I should tell him what I’d seen. He’d been hunting Demons longer than me, but he also thrived on keeping school and the supernatural as two separate entities. And what if they hadn’t been tentacles? What if the storm had just appeared that way with the lightning in slow motion? I didn’t want to ruin his day if there wasn’t an actual threat.

“I’ll miss everyone.” He stuffed the caps under his arms and hugged me. While I wanted to celebrate because I’d made it out alive, he mourned the loss of a place that had been a haven to him for four years.

I leaned my head on his shoulder, listening to his heartbeat, trying to let his steady warmth calm the worry growing in my mind. José’s body was a rock in the sense that it was hard and athletic, but also because it anchored me when I felt as if my mind was running away.

Have you ever watched a storm with time slowed that much? asked Mel.

I shook my head before I remembered there were dozens of people between her and me. No. Do storm clouds in slow motion look like tentacles?

José kissed my hair and whispered, “Are you talking to Mel?”

“She’s having trouble shielding. We should go meet up with her and the others anyway.” I stepped away from him and walked uphill.

Students, who wore white graduation robes, and their parents, who were dressed mostly in summer dresses, slacks, and collared shirts, were clumped all over Saint Patrick’s sprawling lawn.

José draped his arm over my shoulder as I wove around groups of people. The pressure was calming, lulling panic monsters back to sleep with its warm weight. I glanced up at the clouds. They were closer and darker. The wind sped up, stealing programs from a dozen people’s hands. The clouds lit up with lightning, but I didn’t see any tentacles.

Mel’s voice popped back into my head. I don’t sense anything in the clouds, and neither does Niben. I guess she’s been restraining the storm for half the ceremony. Perhaps you were seeing her power mingled with it?

Maybe. Some tension unraveled from my chest. I’d heard stories about my grandmother, Niben, controlling storms, but I’d never seen her do it. In fact, I’d never witnessed her do any magic unless she was modeling something she wanted me to try. She’d come on a few hunts, but she’d just watched with her unblinking feline eyes and later quizzed me on what I did right and wrong. For all I knew, her fabled storm magic could resemble tentacles.

Her magic manifests as roots or vines. Don’t let her hear you compare it to tentacles.

Mel’s bell-like laugh tickled my ears. I followed the sound around a large family and found Mel giggling under my favorite oak tree wearing a white-and-blue-floral maxi dress that covered her feet and touched the ground.

Once upon a time, looking directly at my cousin with my Sight open, my ability to see around illusions would’ve left me seeing spots, but today, only a dull thin haze of white light surrounded her. Rippled pink scars covered half her face, and her hair, once down to her waist, was just starting to regrow.

“You made it. Congrats.” Mel pushed herself off the tree and hugged me, followed by Grandpa and Niben, who had been standing to the left of her.

“Where’d everyone else go?” I asked. Mike, my aunty Lucy (Mel’s mom), and my aunt Rita (my mother’s sister) had been here earlier.

“They decided to go in before the storm got too close,” said Mel. Mentally, she added, Mom and Niben kept debating how long it was safe to hold the storm off for.

Is there anything those two don’t argue about? I thought back to Mel.

I’m happy my mother and grandmother are talking at all. For years after your dad died, they didn’t. Mel winked at me and shrugged.

“Congratulations.” Grandpa hugged me. He was as dressed up as he ever got with khaki slacks and a short-sleeved blue button-up shirt. His ocean-colored eyes squinted, and his lips twisted into something halfway between a smile and a scowl: his “why can’t you people talk out loud so I can hear you” face.

Niben, who wore the same dress as Mel only with reddish-orange flowers, glowered at the thunderclouds. Her pointy ears, which appeared as normal ears to humans who couldn’t see around her glamour, twitched. The gusts pulled strands of red hair out of the two buns she’d braided it into. The strands flailed around like tentacles writhing in the wind.

Maybe I had just seen cords of her power in the clouds. Sometimes, when I saw magical things for the first time, I saw them how my brain could most easily process the latest shift to its reality. The tentacles could’ve been ropes of magic tethering the updrafts and downdrafts.

“That storm is moving in with a vengeance now. Shall we hurry up and take pictures before we are all drenched?” Niben turned her back on the thunderheads and pulled a bulky DSLR out of her bag. She loved photography. Apparently, it wasn’t a thing in Faerie, so when she was on Earth, she had to get her picture-taking fix.

“Are you still controlling the storm?” I asked as I stood next to José, watching it over Niben’s shoulder.

She adjusted the focus on her camera. “No. The longer I hold it off, the worse it will be when it hits, and I’ve already restrained that one far longer than I should have.”

“Stand a little closer together, and, José, stop slouching.” She took a few more pictures and asked Mel to go stand where José had been.

I counted as I exhaled, gradually slowing my perception of time, staring at the cloud behind Niben.

Mel smiled at the camera. It’s only a storm.

I slowed my perception more, so when lightning flashed, the cloud remained lit up for a whole seven seconds. There was slow movement in it like drenched, dirty cotton balls shifting in a bag as someone dumped water in it.

Something slithered near the bottom of the cloud and vanished. 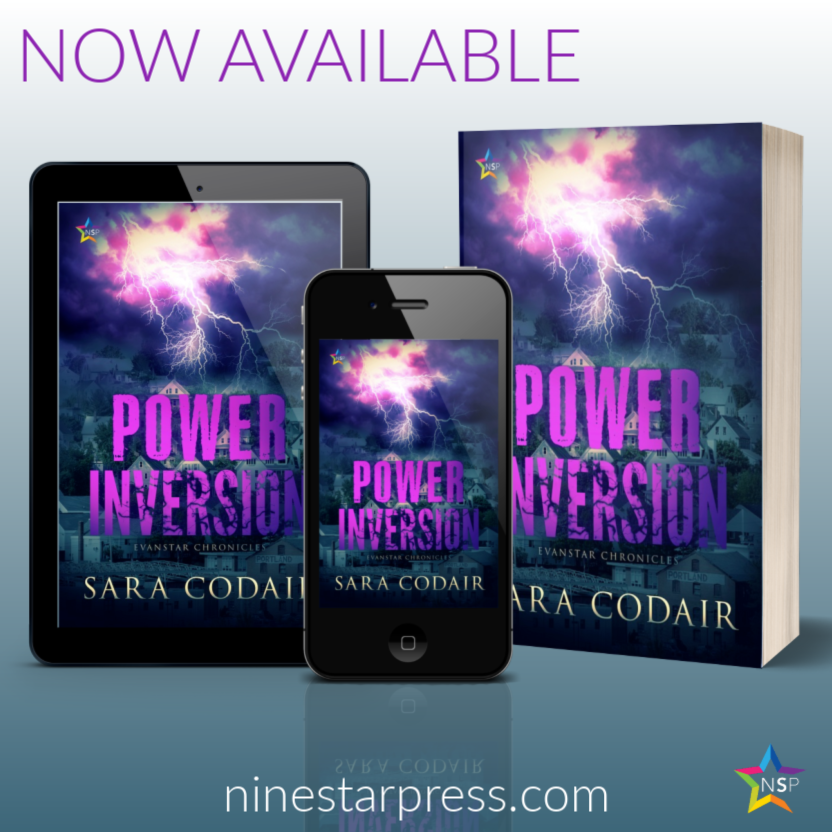