Nathen was recently diagnosed with autism, and he’s a newly created vampire. His maker, a multinational corporation with its finger on the pulse of the technology industry, has recruited him to stop a terrorist plot. In the process, he meets Cameron, a telepath and psychologist, who has a troubled past he keeps locked up in the shadows of his psyche.

Nathen is confused by social cues and Cameron can barely block out the thoughts of others.

Together, they find common ground, and with the help of their friend Syn, they work out the secrets of the terrorist group and learn that the plot is far greater than they could have imagined.

Sterile. That was the name for a room like this. Brightly lit, the room had a mirrored wall reflecting the enormous, white, tempered glass-topped board table surrounded by at least forty, comfortable, white chairs. Sitting across from Nathen was a middle-aged, nondescript albeit impeccably dressed, man in a dark pin-striped suit that cost more than most people pay in monthly rent. He was sitting impossibly still with a demeanor of infinite patience and calm, observing Nathen with an unreadable expression. Behind him was a paper-thin monitor mounted on the wall that reflected the back of the man’s balding head, and Nathen. They were alone in the room, and there were two doors leading out on the side of the room opposite the mirror. What looked like an original Pollock hung between them, the only color in the room.

“Oh good, Mr. Hale. You are with us. Welcome to your new…position.” The man’s voice was as boring as his appearance, though there was something strange about the way he spoke. Nathen couldn’t quite put his finger on it. He even sounded blasé, as if he had given this speech a hundred times before. “It is good to have you as the newest member of the Impetus family.”

Impetus? Nathen knew that company. He may have only been twenty-two years old and more concerned about playing World of Warcraft than following Fortune 500 companies, but he knew that corporation had its hands in just about everyone’s pots. He became distracted by his reflection in the monitor and thought his raven hair, which was usually unkempt, looked uncharacteristically styled.

The man held up a finger as if to silence, though Nathen had not made a sound. “You have been recruited for an extraordinary purpose. And while I am certain you may have questions, please hold them until I am finished. Here is your on-boarding packet.” He referenced a single sheet as he pushed a small pile of papers across the table, sitting a mahogany Montblanc pen atop them.

“I will need you to read through this stack of papers and sign where there is highlighted space…” Nathen considered the huge stack of papers, then shook his head. Wait…he had spaced out again. How much did the man just say he was going to be paid?

“…As long as you remain with the Company, we will see to all of your needs. Of course, you are welcome to hunt as you see fit, as long as it does not reflect poorly on the Company. But I’m getting ahead of myself. Please, read and sign, and we will move to the next step. I will explain everything you need to know about your first assignment. Oh, and what being a vampire means.”

A whole slew of thoughts and emotions went through Nathen’s mind as he adjusted his glasses. The sheer amount of information was overwhelming, and because he didn’t have time to process it all. The only things he had paid attention to were the money figures and the fact they had mentioned benefits for his family. How did I get here? I didn’t sit for an interview, did I? Did I even apply for this job? And what is it about that man’s speech? He sat still for a long minute, sorting and retracing his steps after leaving the office of the psychologist. He had been there that morning after two days of testing the previous week, only to have the diagnosis of Autism confirmed, which he had not yet fully processed. The short of it was that he had a social communication deficit and didn’t pick up on everything in social interactions. It explained why he was confused when people were supposedly being sarcastic, and he never had been able to tell if someone was flirting with him. His doctor had told him he saw things as black and white, but missed the rainbow. It had made Nathen laugh at the time, though the doctor hadn’t laughed with him, so he stopped. But he had found it funny that he was missing rainbows. Nathen’s eyes darted as he was sorting his visual memory.

Finally, he admitted, “I’m sorry. I’m confused as to how I got here. And I don’t remember applying for the position you are offering. Um…what is it that I’m getting hired to do?”

As the words left his mouth, he noticed something strange about how his teeth and tongue moved, as if there was something new, though he couldn’t place what was different. He reached up to his chin feeling it for pain. Maybe he had been knocked out with a punch?

The man arched one eyebrow almost imperceptibly and stared at Nathen, speaking slowly, “You are being hired for your computer prowess, Mr. Hale. We are aware of your unique abilities to find your way into just about any system you attempt to enter, either legally or illegally. You will be putting your talents to work for us, and for the greater good if I may be so bold. Your first assignment will be to assist us in defeating those who are currently threatening children and their families, a story I am certain you have heard about. I will tell you more once you have officially accepted the position.” The man tapped the on-boarding paperwork that he had pushed over moments before. “And, you did not apply. You are being drafted.”

“I don’t know what you mean by ‘illegal,’” Nathen protested, his mind racing as he tried to figure out if he had done anything to worry about with his latest online endeavors.

Quickly trying to cover up, Nathen explained, “I’m paid to find vulnerabilities in systems, hired by companies to discover and report. And how did I get here? The last thing I remember before waking up here is leaving the doctor’s office.”

Nathen picked up the forms and started reading them, then glanced back up as his thoughts replayed what the man had been saying. It sometimes took him a few minutes to catch up if he wasn’t paying strict attention. “And what do you mean by ‘Vampire?’ Is that the internal project name I’ll be working on?”

The man fixed Nathen with a stern glare. “Do not play games, Mr. Hale. You are what is known by many as a ‘hacker’ and engage in a number of extracurricular activities I am certain you do not wish everyone to know about. But we do know. And that skill set makes you valuable. Please sign, and I will move forward with explaining everything else.”

Nathen thought about it, reasoning that it was a competitive salary for California and appreciated that his family would be covered. Because his mother was an attorney, Nathen knew never to sign a contract without reading it first. Trying to be polite, Nathen asked, “Do you mind if I read over the contract so I know what I am getting into?”

The man waved his hand, a gesture of patient permission, with a slight inclination of his head as a way of acknowledgement. One of his hands gently came to rest on the other, both folded in front of him atop the leather portfolio as he stared ahead, returning to a state of perfect calm. 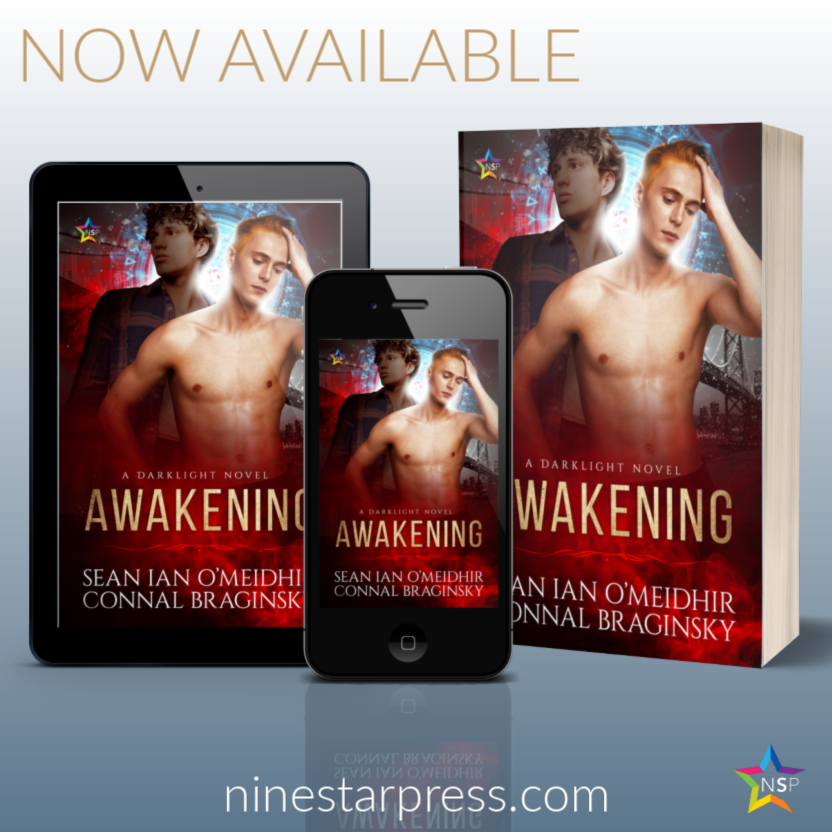 Connal Braginsky is a software engineer who lives in San Diego, California. Diagnosed with high functioning autism, Connal sometimes struggles in social situations, but has an inner world that is always incredibly rich. With an insatiable thirst for knowledge about many esoteric things, Connal brings a lot of personal philosophies and interests to writing.

Sean Ian O’Meidhir is a psychologist who lives in San Francisco, California. Sean is a hedonist who believes in living for today, living every day to the fullest, and enjoying as much as possible. Sean has been gaming since adolescence and has written about and played hundreds of lives, reveling in the chance to take on new personalities, dramas, even disorders.