Title: From the Dark We Came

Belar has made lying into an art form. His neighbors know him as a mild mannered music teacher, but to his fellow monster hunters he’s a senior agent with one of the best track records in the organization. Werewolves, malignant spirits, and other oddities—you name it, he can track it. And kill it if necessary.

But when a vampire shows up in Belar’s parlor, his two worlds crash into each other. The vampire is named Cassian, and if he had any sense of decency he would be dead since Belar has already tried to kill him. Twice. Luckily, Cassian isn’t interested in holding a grudge. He wants to hire the hunter. Someone in vampire society wants Cassian dead and they’ve been using Belar to do their dirty work. Finding the culprit will save them both.

Their search for answers takes them through a nighttime world of ancient vampires, demon tailors, and monsters of pure shadow. But Belar hasn’t been the only one lying, and enemies and allies are harder to tell apart in the dark.

From the Dark We Came
J. Emery © 2020
All Rights Reserved

Vibrant pink and amber dawn streaked the sky before Belar finally clambered down from his perch in a nearby tree. He moved with spidery grace. Heights had never bothered him, not when he had perfected the art of sneaking out of his bedroom window before the age of six. He had only gotten better since then. Nothing soothed like a narrow ledge beneath his fingers and a world of sky behind him, waiting to catch him if he fell. Granted, the fall would most likely kill him. But until then—pure ease.

He should have been born a bird instead of a man.

The abandoned house was silent. He had searched the area for days before he’d found the place, half swallowed by the encroaching forest. The perfect place for a vampire to hide, empty as it was, but not so distant from human society to make feeding difficult.

There had been a brief moment earlier when he had even worried his guess was wrong, and the house really was as empty as it appeared despite the feel in the air—blood possibly—that called to him. Then he’d gotten his first sighting as the vampire had come lurching back to his nest and removed any lingering doubt. Belar had gauged him as average height (for a vampire as they ran tall) and probably quite old based on the speed of his movements. He wasn’t graceful—exhaustion rendered him clumsy—but he was certainly fast. Belar had lost track of him for seconds at a time as the vampire zigzagged through the dense underbrush in the woods. But by now the vampire should be fast asleep, hidden away where the sun couldn’t disturb him or his rest.

Belar had waited an extra hour to be certain. Not that he was worried. Because he wasn’t.

Vines grew thick over the sides of the old house, its sagging roof full of patched holes, half the windows empty staring eyes, their glass long since shattered. Utterly abandoned. Dilapidated. Save for the curtains hanging in a lower room, a cheerful, if faded pattern of blue on white like the border on a fancy plate. They had no reason to be there. Not here in an empty house, in an empty town where all but the birds had moved on. Even the bones of those caught in the fire that had destroyed the village years ago were gone. The forest had reclaimed everything but a handful of houses, their crumbling walls marked by smudges of soot and a few scattered patches of paving stone that had once been the town square. The bridge arching over the nearby stream verged on collapse. The rest was mossy, green, and still.

His eyes strayed again to the curtains in the window. Something about them unsettled him.

“Or maybe you’re just losing your touch after the last time,” he muttered. In the stillness, his voice sounded loud as a shout, and he flinched despite himself. But anyone was liable to be a bit jumpy after his recent near miss, he reasoned.

His last hunt had begun as they typically did. Weeks of research and information gathering about the area before he successfully pinpointed the resting place of the vampire and felt safe making his move. He’d always been thorough. Usually it served him well. But despite his many precautions, despite waiting for the sun to rise high enough to assure his target was deeply asleep, Belar had found himself trapped in a tomb with a very angry and very awake vampire who was fully capable of fighting back. Belar had recovered from the blow that threw him into the wall just in time to see the dark figure of the vampire eclipsing the sun streaming in the open door. For one moment, as impossibly beautiful as a wrathful god to Belar’s dazed mind. Then he ran out into the daylight. Everyone knew what happened to vampires touched by the sun. No part was pleasant. No one seemed to have told this vampire though. There were no screams. No flames. Not even the slightest sizzle of searing flesh. Nothing but a rapidly retreating vampire.

Belar had been lucky to escape with nothing worse than a black eye, a sprained wrist, and enough cracked ribs to make breathing exciting for the next few weeks. In a lifetime of brushes with death, this had been the closest of all. By rights he really should be dead. Not that he was complaining on the last point.

And clearly he hadn’t learned his lesson well enough since here he was stalking yet another vampire. Other hunters might have taken the job if he’d wanted to give it up. The thought had never even occurred to him.

Belar slithered in through one of the gaping eyehole windows and landed softly atop a floor carpeted with moldy leaves and splintered wood that had once been a shutter. He took a moment to get his bearings. There wasn’t much to see. He’d surveyed the house from every imaginable angle outside, but hadn’t ventured inside. He hadn’t dared. The risk of spreading his scent around and alerting the vampire to his presence was too great. Now it wouldn’t matter. The sun was up and so was the vampire’s time.

The stairs leading to the cellar were almost completely broken away. What remained was as rotten as everything else in this place. A few jagged timbers and a yawning darkness below. He would have to be careful climbing back up so he didn’t end up full of splinters.

Belar checked his axe and the knives strapped to his wrists before he snugged the knot of the scarf tied over his face. Then he leaped down to kill himself a vampire. 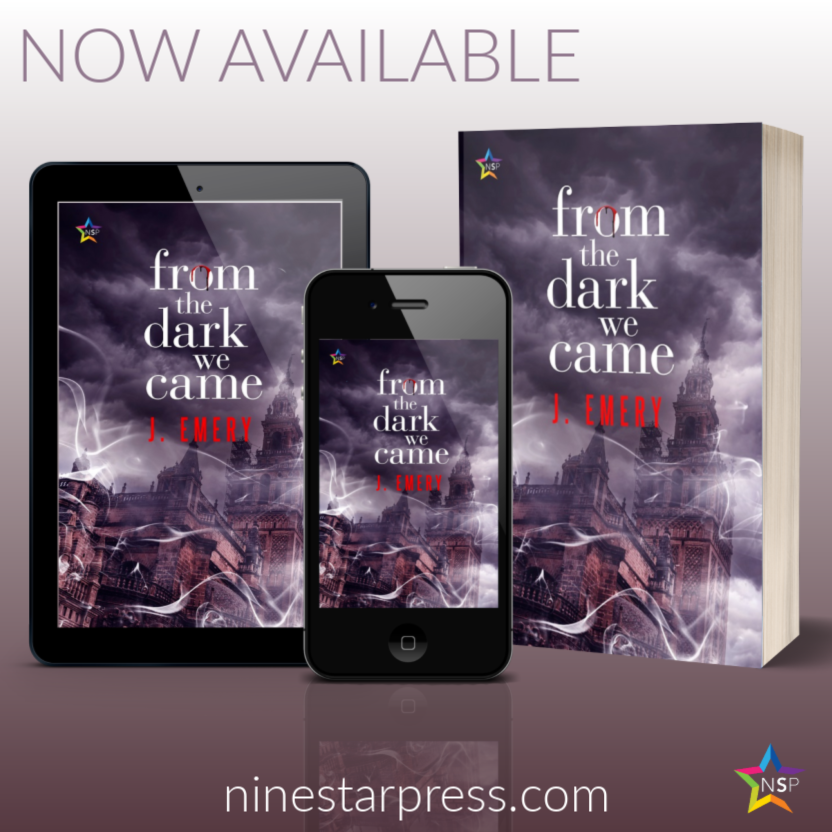 J. Emery is slowly writing their way through every fantasy trope imaginable. And if they can make it weirder and queerer while they do, that’s even better as far as they’re concerned.

They spend their free time gaming, working on their cosplay creating skills, and drinking large quantities of tea, occasionally all at the same time. They have also been known to document their ridiculous levels of terror while watching horror movies on twitter as @mixeduppainter. Sometimes they even discuss upcoming projects.

They have also written and self-published two queer short stories: An Offering of Plums and Help Wanted.