Title: Life Minus Me

Mel is half Angel, but despite her ability to heal and read minds, she feels powerless to help anyone. When a prophecy shows a local pet supply store owner driving their car off a bridge, Mel sets out to stop it.

Baily, owner of Barks and Bits, is barely holding it together. Things keep going wrong, and their depression spirals out of control. Just as they start wondering if they’d be better off dead, a new friend provides a glimmer of hope. But is that enough to keep living?

Mel never thought saving Baily would be easy, but she can’t figure out when, where, or why Baily’s suicide will happen. As her confidence fades away, she wonders how she can help anyone when she needs so much help herself.

Life Minus Me
Sara Codair © 2019
All Rights Reserved

Sun beat down on Mel’s cold, rosy cheeks, and wind whipped her blonde hair into a frenzy of thrashing strands. She sped up on I-95 in a yellow Jeep Wrangler with the top down on a chilly Saturday morning in January. The fact that she even felt cold at all reminded her that she was a little human…25 percent human.

A salty chill grew in the air. A green bridge loomed on the horizon. It crossed the Piscataqua River, the border between Maine and New Hampshire, leading her from the place where she, a seemingly human college senior who lived with her grad-student fiancé, was deciding which medical school to attend, to one where she was an Angel-Elf-Human hybrid who fought Demons and healed minor injuries. Sometimes, Mel felt like she lived in two worlds. In one, science and reason left little room for belief in the supernatural. In the other, her maternal grandmother was an Elf, her father was an Angel, and the rest of her family members were Demon hunters.

They weren’t technically two separate worlds so much as cultures, one hidden from the other. Mel led a double life in this messy multifaceted world where she tried her best to make it a better place. She tried, but she failed more than she succeeded.

She tapped the steering wheel with her fingers, drumming a rhythm to a song someone was listening to in the car in front of her, one she wasn’t hearing through her ears, but through telepathy she’d failed to turn off. She understood even less of the science behind her mind reading than that of her healing abilities.

Speeding up, she passed the pickup truck whose driver was loudly thinking about the music he was listening to and how it reminded him of his ex-boyfriend. Mel imagined the rush of wind, the growl of her engine, and a big brick wall shielding her mind from everything outside her skull until the music ceased. Mostly. She’d inherited her telepathic powers from her father, but she didn’t control the ability nearly as well as he did.

She tightened her grip on the steering wheel. It was going to be at least another hour before she got to Mary’s Eats, a diner where she was meeting her cousin, Erin, for breakfast.

Driving was difficult when her attempts to control her telepathy failed, but crowded restaurants were more of a challenge. When Mel stepped through glass doors into the diner, other people’s thoughts battered the mental walls she’d constructed around her mind. She squeezed by the line of customers waiting for tables, ignoring their glares and reinforcing her shields so the dull, incoherent murmuring of a dozen minds faded away.

The L-shaped room was filled with pink and blue tables that had been there since the 1950s. The faux-wood vinyl floors were less than a year old, installed around the same time the owners had gutted the walls to insulate them, updated the wiring, and added gender-neutral bathrooms. Those bathrooms, along with the large portions of bacon that the restaurant served, were why Erin often insisted on meeting here.

Erin sat in the fifth booth from the line, hood up and headphones on. Rocking back and forth to the beat of music Mel couldn’t hear, Erin shredded a straw wrapper and stared at the silverware. Two menus sat untouched on the edge of the table.

A bony shoulder collided with Mel’s back. Newspapers flew up into the air and floated to the floor like feathers from broken wings as a man with wispy gray hair and pasty skin jumped backward.

“I’m so sorry,” he said, catching his balance on the side of the booth. “I wasn’t watching where I was going.”

“It’s fine. It’s a good thing you didn’t fall.” Mel bent down and started picking up the dropped papers.

“I’ll get them. I’m healthier than I look.” The old man bent down and scooped up more pages.

Mel picked them up quicker and then helped him back to his feet.

“Thank you,” he said, before shuffling off to a table where a younger person with short brown hair and rosy cheeks glared at a computer screen.

Cooper clutched his disorganized newspaper to his chest as he looked over the person’s shoulder. “That check was only supposed to be for $5,000, not $50,000!”

“Call the bank. They close at noon,” said the younger person.

“Mel? Someone else is going to walk into you if you keep standing in the middle of the aisle,” said Erin, whose hood and headphones were now off.

“Good point.” Mel slid into the seat across from Erin. “It’s been a long week.”

“It must be horrible, going back to school after having a month off.” Erin gathered pieces of their shredded straw wrapper into a pile and slid them under the menu.

“You had a couple weeks off too.” Mel fidgeted with the ring on her left-hand ring finger.

“Over which I had to write a five-page paper. You had no homework and get to start all new classes.” Erin picked up the butter knife and put it down, squeezing their hands together.

“Are you okay?” Mel leaned forward and tilted her head, peering at Erin’s grass-green eyes, barely resisting the temptation to let her shields down so she could read Erin’s mind.

“Not really.” Erin yanked their right hand away from their left, running their fingers through short, red curls. “The meds my new doctor had me on were actually working until I broke out into hives, got really dizzy, and couldn’t keep a single meal down.”

“That sucks.” Mel curled her hands around the edge of the booth’s seat, digging her fingernails into the old vinyl. Erin wasn’t much more human than Mel, which was probably why medications intended for humans didn’t work. But Erin didn’t know that, and Mel couldn’t tell them the truth—she was bound by an oath that was impossible to break. Had she known what the consequences of this secret would be, she never would’ve agreed to keep it.

“Yup. My stupid brain is already foggy again, and I can’t focus on getting anything done.” Erin picked up the fork, spun it around, and ran their fingers over the prongs.

Mel snatched it out of their hand. “Careful.”

Erin rolled their eyes. “I wish the server would hurry up and come back now that you’re here. I’m starving.”

“Me too.” Mel slid Erin’s napkin and butter knife closer, farther away from Erin.

“Really? You think that little of me?” Erin stood up, fists clenched as they stared out the window to the street where their car, a Jeep Cherokee built four years before Erin was even born, was parked outside.

“Erin, I’m sorry. I just…it’s an old habit, maybe. I’m sorry.” Mel’s hands shook as she waited for Erin to either accept the apology or storm away. Her chest got tight and her eyes burned. A year and a half ago, she had sat with Erin in this very diner, thinking Erin was just fidgeting, not realizing until she dropped her shields that Erin had a butter knife under the table and was nervously running their thumb back and forth over the edge until it bled. It was the type of thing that used to happen all the time, and each time Mel intervened, Erin pushed her further and further away, resisting help no matter who it came from.

Erin took a deep breath and sat back down. “I don’t cut anymore, and if me being off medication means you’re going to start meddling with my life again, I’m not talking to you. Either accept that I’m fine without your interference or leave me alone.”

“Okay. I’ll stop. I won’t intrude.” Mel gritted her teeth. Erin would’ve died if she hadn’t meddled. Erin’s bitterness over Mel’s interference in a suicide attempt was a sign Erin was not fine at all, but there was nothing Mel could do about it without crossing boundaries and breaking the fragile trust she’d built with her cousin.

Erin leaned forward. “I have a good therapist now. Mom isn’t ignoring me as much as she used to. Be my cousin and friend. Don’t act like some guardian angel trying to save me.”

Mel squeezed her eyes shut, holding tears in. She’d do what Erin asked, for now, even though it made her feel like a complete failure, like the shittiest Angel ever. 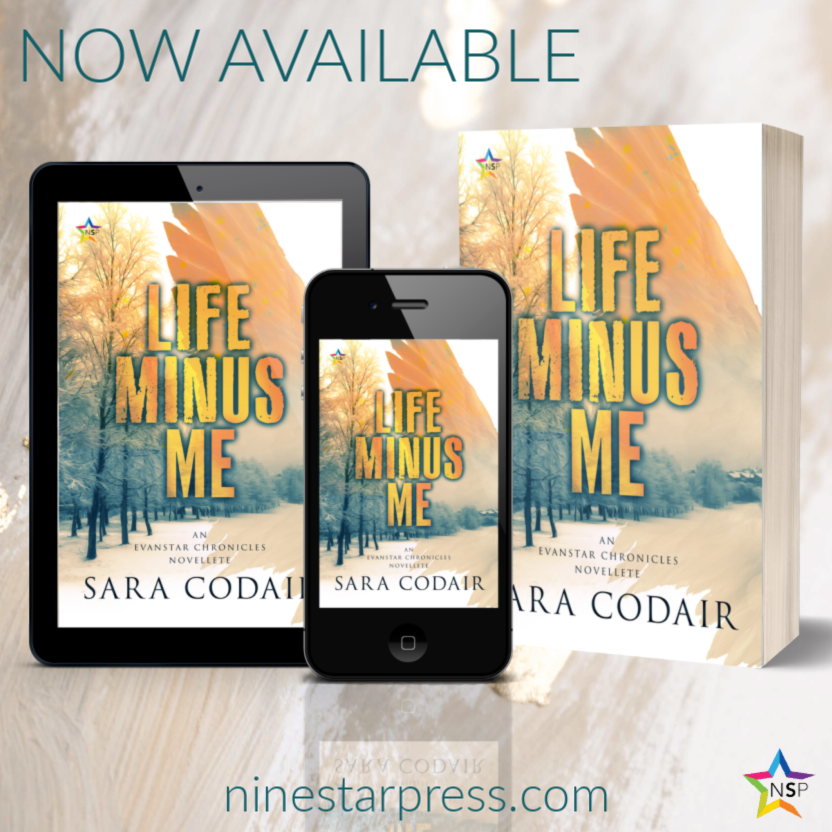 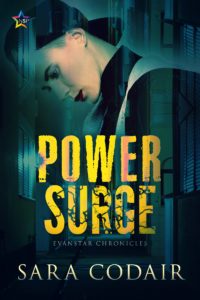 Erin has just realized that for the entirety of their life, their family has lied to them. Their Sight has been masked for years, so Erin thought the Pixies and Mermaids were hallucinations. Not only are the supernatural creatures they see daily real, but their grandmother is an Elf, meaning Erin isn’t fully human. On top of that, the dreams Erin thought were nightmares are actually prophecies.

While dealing with the anger they have over all of the lies, they are getting used to their new boyfriend, their boyfriend’s bullying ex, and the fact that they come from a family of Demon Hunters. As Erin struggles through everything weighing on them, they uncover a Demon plot to take over the world.

Erin just wants some time to work through it all on their own terms, but that’s going to have to wait until after they help save the world.