It is a standalone story.

Can a reindeer shifter find love this Christmas?

Being called upon to pull Santa’s sleigh is an honour for any reindeer shifter, but for Dashiel the timing couldn’t be worse.

Stuart was looking forward to his Christmas Eve date with Dashiel, only to have him cancel at the last minute. He puts his disappointment aside and instead focuses on making his younger brother’s Christmas as wonderful as it can be, despite the loss of their parents the previous winter.

While flying over his home town, Dashiel spots a young boy on the streets, and he knows he has to help. When the young runaway turns out to be his date’s little brother, he brings him on board the sleigh, determined to see him safely home to Stuart.

“Dashiel, you’re up next,” the elf in charge of fittings called. “Get your hooves moving, you’re holding everyone up.”

Dashiel wondered who had first depicted Santa’s elves as cheerful little toy makers. He had yet to see one smile. They seemed even more miserable than he was right now. Of course, he hadn’t met many, and it was the most stressful time of year for them. Not to mention they hadn’t seen daylight in three months. That would make him grumpy too. Still, there was no need for them to prod him in the rear quite so hard to get him moving.

The next few hours were spent being trained in how to respond to the reins. Dashiel didn’t mind learning how to pull the sleigh, he just wished they could leave off the bells until they were in the air. The constant jingling was driving him up the wall.

Then came the flying lessons. Yuri must have seen Dumbo recently, because he was giving them a loud rendition of the song about elephants flying, but substituting reindeer instead. Apparently teasing the first timers like Dashiel was the highlight of his night. There were three shifters who had never been summoned before, Dashiel being the youngest of the trio.

The first time Dashiel’s hooves left the ground he almost panicked. Thoughts of flying off into space nearly had him hyperventilating, even though the others assured him that no matter how hard he tried, he would never even reach the height of a plane.

Finally, they were as prepared as they could be. Dashiel took his place beside Fred. Yuri and wife were in front of them, the couple taking the lead.

Everyone went quiet when Santa arrived. He was just as Dashiel had pictured him, though he had never seen him in person. Unlike the couple in front of him, Dashiel’s parents had never been summoned on the same night, so he had never been brought to the North Pole with them.

As they took off into the sky, Dashiel glanced below and saw how large the toy factory truly was. It was so much more than a single building. There was an entire village, with every house decorated for Christmas.

“Isn’t it beautiful?” he said to Fred.

“I’ll take your word for it,” Fred replied.

“You’re not scared of heights are you?”

Dashiel snorted. “I’d rather look down at the ground, than at Yuri’s arse all night.”

“I heard that,” Yuri replied. “I’ll have you know, my arse is the envy of reindeer the world over.”

Dashiel couldn’t laugh properly in his reindeer form, but he was starting to feel the Christmas spirit now. Chances were, he would be required to do sleigh duty again in the coming years, but there were those who were only summoned once in their life, and since he didn’t know if he would be called again, he intended to make the most of tonight. 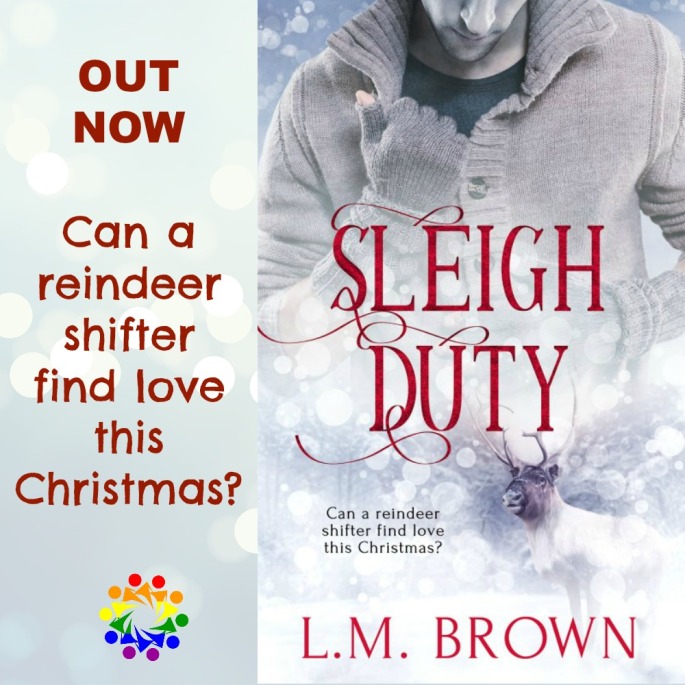 When L.M. Brown isn’t bribing her fur babies for control of the laptop, she can usually be found with her nose in a book.

Follow the tour and check out the other blog posts here