Title: They Are the Tide

After escaping from two very different prisons, Toby and Epsilon 17 finally have a chance to live for themselves. Helping to build a new city in the wake of the destruction of the Institute should be all they’re worrying about, but Epsilon 17 has a horrific secret that’s getting harder and harder to hide. Cassandra isn’t dead, she’s locked up in the deepest, darkest corner of E17’s mind. Pushing E17 to the brink of madness, Cassandra is determined to take over E17 entirely and destroy the rebellion.

Can Epsilon 17 overcome their hidden enemy and learn to trust the people around them? Unwilling to wait for Cassandra to force their hand, Epsilon 17 decides to take control: to go to a city where the Institute still holds sway, and try to destroy them once and for all. Toby, forbidden from joining the mission, has to find his own path forward. Their connection is as strong as ever, but the distance between them keeps growing.

They Are the Tide
Tash McAdam © 2019
All Rights Reserved

Sometimes I think all I have ever done is hide.

I hid in the Institute, shielding my memories, my soul from those who wanted to take it from me. Now I hide here, from those who want to help me. They want to help me, but they’re also afraid of me. I had a reputation before I was “saved.” Their thoughts call me “the Hunter.” Even though they try to cover them, I catch their fear and distrust echoing in the air all around me, and in the slant-eyed gazes they throw at me. They don’t know I can still hear them. I’ve always been stronger than people predict. I understand why they feel this way, but it burns me still. So, I avoid them as best I can.

I’m sitting alone in the lush garden that circles the new ARC headquarters. It’s beautiful here, a swathe of luscious green studded with vivid color, trees and flowers in carefully designed paths that lead around a low-slung, glittering white building. The whole area is sheltered with cunningly joined transparent sheets that filter out the worst of the dangerous sun. If you squint, you can see the shape of them, hexagon upon hexagon, tessellated together. Last week they were tinted dark for the brutal summer months, now they’re clear and nigh-on invisible. This used to be the Governor’s house, but he fled during the fall of the Institute and took a lot of the military police with him, leaving the city reeling. ARC stepped in, stepped up, tried to retain normalcy, but the shiny surface of city life has worn thin. The power vacuum caused by the disappearance of most of the higher-ups is exacerbated by the growing discontent of the township peoples. Without the Institute dampening them down, hunting for the worst of the malcontents, the slums are rumbling, and the people of the city are frightened and confused.

Several of the factories that produce luxury items for the Citizens have gone on strike, the poor workers no longer numbed to the imbalances in their lives. ARC has worked in secrecy for so long they don’t know how to take charge like this. There’s no direction, and that is frightening. Shivering, I turn my thoughts away from such darkness, and I look up into the bright-blue sky.

I can’t get enough of being outside. Simply sitting in the air is still incredible to me. Several nights I’ve been woken by Toby or Darcy shaking me gently, urging me to go inside to escape the heavy chill of the night. I don’t have nightmares when I’m outdoors. I seem to have developed a sort of claustrophobia that makes me edgy and jumpy when in a closed environment. Strange, when I lived below ground for years, to think that now I’m free, the walls press on me.

It’s been two months since I tried to kill Cassandra. Looked her in the eye and stopped her heart inside her chest but failed to end her. My thought-blind brother carried me out of the wreckage of the Institute, not knowing what he couldn’t see. That she didn’t die, not really. I bear her with me, a nebulous tumor nestling in the secret place that was once my salvation. The bunker I built to save my memories from the Tank, from the wipes that would remove my personality and feelings. She hides in there; I know it. For two months I’ve fought her for possession of my mind, control of my body. The fear is with me, always, but it lessens when I’m outside. I like to sit under the apple trees most of all. The fresh, sharp smell permeates the air, and I fill my lungs until it feels like they must burst from the strain. The filtered sunlight bathes me, trickles honey warm down my spine and soothes my troubles until I can almost forget them.

But no one here wants to forget what I’ve done. The few people who I don’t feel the need to hide from are Toby’s personal group of close friends. They accept me as he did, unquestioningly. Their shields are strong enough that I don’t get inundated with their private thoughts against my wishes, and their open faces tell me they trust me not to pry. That trust is an incredible thing. It feels tangible. I treasure it, as though I can cup it in my palms and feel a tiny heartbeat. The smallest act could snuff it out. I keep the tightest lock on my powers possible. Awareness of that trust helps me control myself and win the fight that always tears at the back of my mind.

Darcy is my favorite. There’s something about her that soothes me. She’s so calm and accepting. In a strange way I feel mothered by her. She always checks in on me, makes sure I’m managing but never makes me feel like I’m not enough, not trying hard enough or being normal enough. She doesn’t mind that I’m quiet. Sometimes she’ll come to sit with me and draw while I think. I love watching her draw, watching a thick black line roll over a blank screen and seeing pictures come alive.

I’ve tried to draw. I’m able to produce accurate technical sketches, one of the many skills the Institute has written through the core of me—regardless of any innate ability—but I don’t know how to take what I see of beauty and translate it into an image. My drawings are dead. And really, it’s the stillness of Darcy’s consciousness when she draws that I envy. I want to find the thing that stills me, settles my heaving insides. There must be something. My brother doesn’t rage inside as I do. Which is a blessing, I suppose. If he did, with his power, everyone would feel it. We’d probably die from it.

Toby is… Toby is Toby. His naiveté often dazzles me. His shields are firm for the most part, having pinned them down, knowing how dangerous it is to be open, but he still projects this aura of hope, of trust. He believes that people are good, and pure, and they all deserve to be safe and happy. He’s been so untouched by loss, disregarding the past year of his life, that he’s still untarnished by the harshness of existence. As well, being unable to read protects him from the more bitter realities of what lies below the surface. It’s a beautiful thing, and I know I’ll do anything to protect that in him. Not a day goes by when I don’t regret my choice. Not Cassandra’s death itself; the woman was, and is, a poison. Now one that seeps inside me, which I believe is better for the world. I regret the innocence I took from my brother, and the price I pay is for that.

My penance is clear; carry Cassandra inside me and never, ever set her free from the prison she is trapped in. Never allow her to take hold of me, or find a way out. I’m her jailer as she once was mine. It seems like a fair trade. 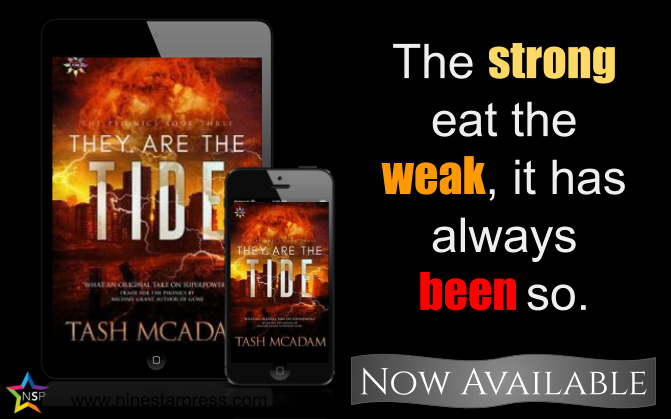 Tash is a 30 year old teacher candidate at UBC in Canada, although they were born and raised in the hilly sheepland of Wales (and have lived in South Korea and Chile before settling down in Vancouver). Tash identifies as trans and queer and uses the neutral pronoun ‘they’. They’re also an English teacher and fully equipped to defend that grammar! They have a degree in computer science so their nerd chat makes sense, and a couple of black belts in karate which are very helpful when it comes to writing fight scenes.

Their novel writing endeavours began at the age of eight, and included passing floppy discs back and forth with a friend at swimming lessons. Since then, Tash has spent time falling in streams, out of trees, learning to juggle, dreaming about zombies, dancing, painting, learning and then teaching Karate, running away with the circus, and of course, writing.

They write fast-paced, plot-centric action adventure with diverse casts. They write the books that they wanted to read as a queer kid and young adult (and still do!)