Title: The Women of Dauphine

When Cassie’s family moves into a decrepit house in New Orleans, the only upside is her new best friend. Gem is witty, attractive, and sure not to abandon Cassie—after all, she’s been confined to the old house since her murder in the ’60s.

As their connection becomes romantic, Cassie must keep more and more secrets from her religious community, which hates ghosts almost as much as it hates gays. Even if their relationship prevails over volatile parents and brutal conversion therapy, it may not outlast time.

The Women of Dauphine
Deb Jannerson © 2019
All Rights Reserved

Chapter One
I met Gem the day we moved from the sedate suburbs to downtown New Orleans.

I had recently turned eight, and my first sight of her coincided with our first sight of the Victorian house. I’m not certain if some of my earliest memories are authentic or recreated by photos and hearsay, but that moment made for a striking mental snapshot I’ve never doubted: baroque, crumbling pink-and-ivory walls; a stylish teenaged 1960s brunette perched on the steps. I feasted my eyes upon her in the way only a curious child can. The opportunity delighted me, especially because my parents had forbidden me to stare at the young runaways clogging the sidewalk. The lost children.

I’d be leery of any Crescent City-raised kid who claimed never to have been fascinated by them. The lost children of the city streets were as diverse in origin as they were in countenance. The first I’d seen that morning had been a tap-dancing boy around my own age, gleefully calling to various “cutie-pahs” in an undetermined accent. His joy reached out to me, undisturbed by the morning’s sharp tang of whiskey and street cleaner. I might not have believed he was alone in the world, like the poor souls my parents derided, if not for the layers of sweat marks on his clothes. My parents ignored his dollar-filled top hat and turned my head away in an admonishment. This made me wonder, maybe for the first time, what kind of people they were.

Then, I saw the girl: late teens, stringy sandy hair like frayed rope, weeping with abandon without bothering to hide her face from the tourists and blue-collar shop workers. She seemed “lost,” all right; certainly, more so than the cartoon boys of Peter Pan who had introduced me to the “lost” term in the first place. I remembered the twitch in my father’s face as he snapped the TV’s power button in one fluid motion and turned to explain who the lost children of Louisiana really were.

The girl waiting at our dwelling on Dauphine Street shared a hint of the blonde crier’s defiance, but she also exuded fun. She didn’t bother to sit in the ladylike way I’d learned in church. Still, she jumped up before I reached an angle at which I could see up her green skirt—a fact I noted matter-of-factly, and with some vague sense of disappointment. I continued to examine her clothes anyway, with a youth’s comically bobbing head. I had never seen tights like that before; they were nothing but strings in a diamond pattern. And was that a Boy Scout shirt?

“Hi!” I yelled, unnecessarily since we were barely five feet apart by now. There were chuckles behind me; it seemed like my parents always laughed at me doing normal, serious things. The girl staggered backward, widening her brown-gold eyes. “What’s your name?” She glanced at my parents in something like panic, then back at me, and her face softened.

“I’m Gem.” She glanced behind me again, and I followed her gaze to my mother, situated behind the battered chain-link fence, gazing blankly at our narrow new house. My father caught up, breaking through her reverie as he bustled through the space where a gate should be and pulled our keys out of his suit pocket.

The girl—Gem—stumbled off the stairs and several steps to the right, which is to say, at the edge of the property. Her eyes followed my parents carefully as they entered our new home. Obviously, I didn’t know it at the time, but she was waiting to see if they’d notice her as I had.

Perhaps all houses came with a pretty girl, or maybe she was moving out. “Dad, can Gem come inside?”

My mother turned around in the corridor first. “What, Cassandra?”

“Can she come in with me?” I pointed at Gem and then grabbed her hand. She made a short sound of surprise at my touch.

My mother rolled her eyes elaborately. It didn’t take much to annoy her, especially where I was concerned. She turned to my father, hissing, “Isn’t she a bit old for this?” I could hear the disgust.

My father, unusually jovial today, held up a hand, and my mother went quiet. “It’s okay.” To me: “Sure, little one. Let’s all go in and look around.”

Gem’s expression had gone both stunned and amused. It was a face I’d come to know well and love: the face of a person thrust into a strange scenario she was more than game enough to explore.

“You never told me your name.” Gem flopped into the floral armchair across the room from my bed, then, with a self-conscious glance at me, maneuvered herself into the position my old teacher had promoted as “proper posture.” Unfamiliar furniture crowded the room, from the molded wooden headboard to the dresser’s little blue dollhouse. I missed my room back home, and despite what my father had promised, this didn’t seem “even better” and I could still “remember what came before.” At least I had a new friend already.

“Cassie.” My parents insisted on using the full “Cassandra,” but since they were downstairs, I might as well use the moniker I preferred, the one that hadn’t proved too unwieldy for my classmates to manage.

“You said that already!”

She began to smile, raising her eyebrows. “It’s still true.”

I realized I liked her already. Not only did she dress cool; she struck me as funny, while also, somehow, profound. Had Gem done it on purpose, and anyway, why didn’t people introduce themselves more than once? Even my parents seemed to know she was special, considering they hadn’t made her take off her boots on the rug inside the doorway. Sure, they had ignored her, and so maybe they did not like her, but they must have respect for her. Before this, respect was something I had only seen them demand.

My mind became full of questions, not least of which was why she was talking to someone like me. I settled on the most important-seeming one: “Are you going to stay here?”

Gem smiled again, but this time, one end of her mouth turned down. “Yeah. I’ve been living in this room for a long time, and I’m not about to be driven out.”

“That’s great!” Both hands flew to my mouth, and, sure enough, my mother shouted, equally loudly, from directly below my floor: “Indoor voice, Cassandra!”

“Well, I’m not really your sister.” Gem shrugged and glanced away, her soft brown hair flying in a curtain over her face. “I guess it’ll be like sharing a room with a friend.” 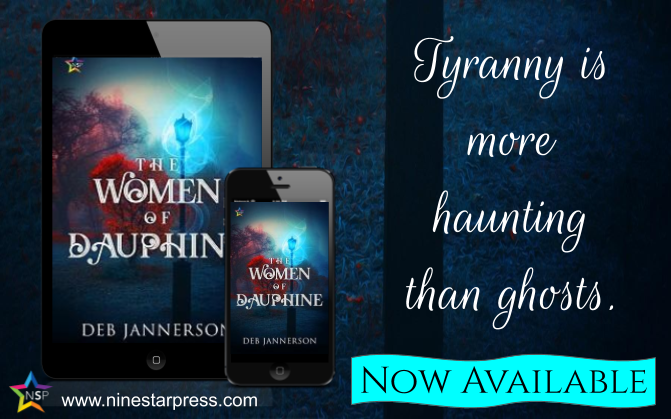 Deb Jannerson is the author of the books of poetry Rabbit Rabbit (Finishing Line Press, 2016) and Thanks for Nothing (Finishing Line Press, 2018), available wherever books are sold. The Women of Dauphine is her debut YA novel. She won the 2017 So to Speak Nonfiction Contest for an essay about queer intimacy and PTSD, the 2018 Flexible Persona Editors’ Prize (and a Pushcart nomination) for a work of flash fiction about gruesome at-work injuries, and a Two Sisters Publishing prize for a story about switching bodies with her cat. More than one hundred of her pieces have been featured in anthologies and magazines, including viral articles for Bitch Media. Deb lives in New Orleans with her wife.