Marcus was likely dead, killed by the Inquisition, or so it was believed. Then the vampire was found, broken beyond words, in an isolated prison fortress. Marcus had never expected to see daylight again, let alone be rescued by his mate. Now he worries he’ll drag Caleb into his darkness.

Caleb was the one who pulled Marcus out of his prison cell, and he’s determined to drag him from the nightmares of his mind as well. After all, that’s what mates are for, and Caleb had lost hope at finding his. And if he can help destroy the entire Inquisition? Well, all the better.

Dealing with Marcus’s physical and mental healing from his trauma is difficult enough, but Inquisition holdouts are causing chaos everywhere, and sinister plots are rampant. Marcus and Caleb have no choice but to fight back. It’s a good thing they are not alone.

Prologue
Caleb ushered the prisoners from their holding cells, encouraging them to escape. A naiad, shivering and pale, was carried by a collared were-creature. A dwarf asked for some assistance getting an injured elf to her feet, a pair of fellow prisoners stopping to lend aid in getting her out.

He continued to move as quickly as possible until he reached solitary confinement at the back of the block.

Only one cell was occupied. The prisoner was curled on his side, groaning as he attempted to right himself. “Hold on,” Caleb said. “Lemme help.”

He was met with a hiss and flash of fangs. Vampire. Caleb shied back to the threshold of the cell, dropping into a crouch. “Whoa, whoa, I’m not gonna hurt ya, man. We’re here to free you guys.”

The vampire blinked a few times before his hackles lowered. His body sagged, the rest of his energy going with it.

Caleb scented the air—filth, sweat, excrement; all of which was expected. Then he smelled blood and infected flesh. As the vampire used all his remaining strength to push himself into a seated position with only one arm, the source was made obvious. “They took your arm?” Caleb snarled. “Fucking bastards.”

Letting out a humorless laugh, the vampire looked at him. “They wanted to know if it would grow back.”

There was no helping Caleb’s growl. Were-creatures and vampires had accelerated healing, a trait of their particular races. But even they had their limits. Growing a new limb? These people were madder than he originally thought.

“Gonna get you out of here,” Caleb said, tempering his anger with an awareness of the situation he was in. He inched inside the cell, moving slowly so he didn’t startle the wounded vampire again. “It’ll be alright now.” He soothed him with the voice he used on Kyle and the other pups when they got scared or needed help with a shift. “You’ll be okay. I promise.”

“I’m so tired,” he murmured, eyes closing as his head fell back against the cell wall. “Don’t even think I can walk out of here.”

“I can’t.” The vampire’s face scrunched in pain, the words forced out.

“We can.” Caleb offered his hand, even though the vampire’s eyes were still closed. “Come on. I’ll carry you if I have to.”

The vampire looked at him, lips curled in mirth. “Yeah? Just you there, small fry?”

Geez, he can manage to joke at a time like this? Caleb thought, though he was amused all the same. This one was most likely a sassy bastard when he was in top form. Something about that thought made Caleb want to see him at his best.

“Up you go,” Caleb encouraged, wiggling his fingers. When the vampire took hold, Caleb hauled him up in one quick motion before the vampire could try to lift himself.

“Shit,” he cursed, balance lost in the process, and falling against Caleb.

Catching him easily enough, Caleb prepared to make a smart comment when he smelled it. Closer now, the scent of honeysuckle wafted under his nose, and every place their skin touched was tingling with static. It couldn’t really be…

“Mate.” The word was said with such awe and reverence, Caleb’s chest clenched.

Caleb looked up to meet eyes the color of sea glass. He licked his lips, mouth suddenly dry. “Yeah,” Caleb agreed. “Mates.” He pulled the vampire closer, both supporting him and fulfilling his wolf’s selfish need to keep him near. “I’ll get you out of here.” If the statement was filled with more conviction than before, then nobody could blame him. 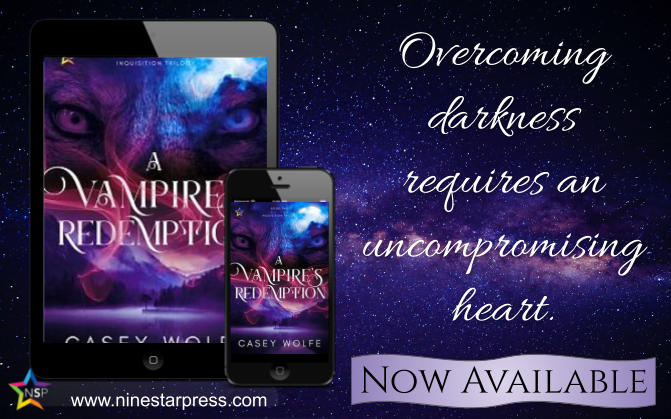 “Everyone deserves a Happily Ever After.”

History nerd, film buff, avid gamer, and full-time geek; all of these things describe Casey Wolfe. They prefer being lost in the world of fiction—wandering through fantasy realms, traveling the outer reaches of space, or delving into historical time periods. Casey is non-binary and ace, living with depression, anxiety, and PTSD, all of which informs their writing in various ways. Happily married, Casey and their partner live in the middle-of-nowhere, Ohio with their furry, four-legged children.