High Arcanist Delaney D’Vaire is the world’s only dark wizard, something that has alienated him from his people since birth. Orphaned as a child, he is shuffled around until the Prism Wizard sees his potential, steps in, and enrolls him in school. Though he never truly feels like he belongs, Delaney excels. Graduating at sixteen, he applies to a unique sanctuary, and his life forever changes when he is accepted. Delaney has the family he’s always wanted; surrounded by love and support, he’s grown into a young man, giving everything to help the people who still scorn him, though he continues to doubt himself. All he needs now is his mate, but Delaney is skeptical that even Fate could come up with his perfect match.

Vampyr Lord Grigori Volkov is the genius of his family. Numbers line up in his head, and he loses sight of the world around him. At fourteen, young Grigori creates a nearly synthetic version of blood to sustain his people, saving countless lives. Content to remain out of the spotlight, his involvement is kept from the general public. Since then, Grigori has spent most of his time alone in his lab, learning all he can and pushing his limits. At twenty-six, Grigori is content with his solitude and doesn’t believe Fate has him in her sights.

When the High Arcanist and the Vampyr Lord appear at the same event, they are stunned to find that Fate indeed has a plan for them. Reeling from their discovery, the mates set upon the task of getting to know each other. It does not take them long to find common ground, but as Delaney and Grigori build their life together, old foes will test them and their entire family. The path Fate has laid out for them is not simple, but they must be strong enough to trust in each other and stand together rather than alone to learn what it truly means to become D’Vaire.

Hours later, Grigori was deeply troubled by his desire to ensure Delaney’s life included everything he wanted. He’d teleported to D’Vaire after sharing a lovely meal with his family where he filled them in on the details of his upcoming ceremony. Grigori was greeted with an enthusiastic kiss from Delaney, then found a cuddly familiar on his shoulder.
However, his pretty mood popped like a bubble when they started talking. He was thrilled to be handed one of the new D’Vaire stones, but it was the subject currently being discussed he would do without given the opportunity.
“Is Dre’Kariston sure he wants to wait to shadow walk? He could move it up a day instead,” Grigori tossed out, treading carefully as he rubbed a hand over Delaney’s leg. The wizard was sprawled out over him on the couch. They’d ditched their shoes, and his initial intention was to get them undressed, but that was not anywhere on his radar now. He hated to think of Delaney on the other side of the veil for any reason at all.
“Yeah, another day isn’t going to matter. Besides, it gives us more time to fine-tune our plans for how we’re going to root Carvallius there.”
“This is something you really want to do?”
Delaney nodded with a smile. “Absolutely. It’s so cool. It’s one of the perks of being a dark caster. I’m lucky enough to have a powerful enough necromancer who can take more than one person with him when he crosses.”
“This is safe?”
Delaney’s grin disappeared. “Shit, you’re worried. Dre’Kariston said Somerly was shitting bricks over him going again. We talked about this before, and you seemed okay with it. I don’t want to make this a thing between us. If it bothers you, I can stay here. I mean, they’ll tell me all about it, and I’m just going to explore. They don’t need me to be there for any of this.”
The wizard’s willingness to drop his idea of going made Grigori feel small and awful. “No, I think you should go. I’m nervous but not like sweating-profusely-going-to-faint-any-minute crazy. I trust you, and I trust the Arch Lich.”
“Are you sure?”
“Yeah, I can’t keep you from doing things because it’s not something I’d want to do or because I’m scared. This is something you want, so I think you should go. Somerly and I will just hold each other tight until our men return from their trip.”
“You might be careful embracing him too snugly. Dre’Kariston’s got a lot of power, he might flatten you.”
“Well, then I hope you like it on the other side of the veil, because he’ll send us both there, and I won’t have you saying ‘Oh, for fate’s sake, Grigori, now we’re fucking dead and this place sucks.’ ”
“I won’t. I’ll start out by reminding you that you missed our first date, and you got yourself killed by cuddling the fuck out of Somerly.”
Grigori kissed his welcoming mouth. “I only cuddle the fuck out of you.”
“Then we just might be safe. You sure you don’t want me to skip it?”
“I want you to go. Well, no…that’s a lie. I don’t want you to go. I want you to stay here with me but I’ll get over it, because that’s selfish. You’ll only be gone for a little while, then you’ll have this amazing experience to tell me about.”
“It’ll be okay, I promise.”
“Just like when I drink from you the first time.”

Jessamyn Kingley lives in Nevada where she begs the men in her head to tell her their amazing stories which she dutifully writes it all down in what has become a small mountain of notebooks. She falls in love with each couple and swears whatever book she wrote last is her absolute favorite.

Jessamyn is married and working toward remembering to start the dishwasher without being distracted by the scent of the magical detergent. For personal enjoyment, she aids in cat rescue while slashing and gashing her way through mobs in various MMORPGs. Caffeine is her very best friend and is only cast aside briefly for the sin better known as BBQ potato chips. 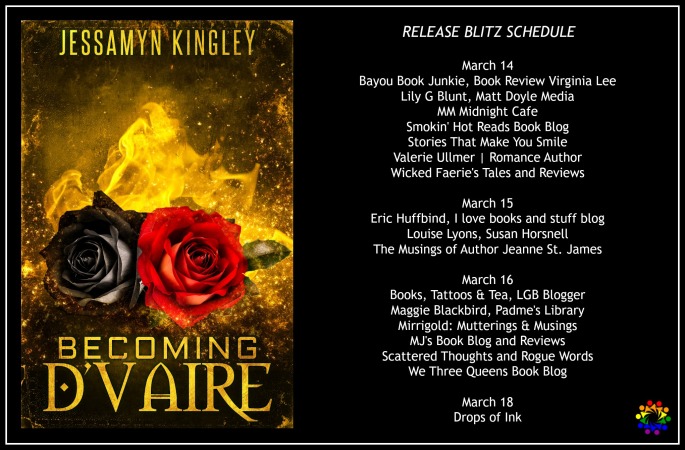