Luca Duray has been quite happy living a solitary existence for decades. But when a steel trap around his leg catches him when he’s weak and hungry, his life is irrevocably changed. He knows the wolf shifter who offers him assistance is more than he appears and immediately makes plans to keep the pup close.

Disowned by his pack for being gay, Tanner McBane is forced to become a lone wolf. While on a hunt, he stumbles upon an injured dragon shifter and provides aid. It’s not easy surviving on his own and when money gets tight, he finds himself face-to-face with the dragon shifter once again during an interview. Tanner isn’t sure a wolf should be working for a dragon, but he accepts the job and unknowingly creates a bond to his new boss. Soon, Tanner learns Luca isn’t just his boss—he’s his mate.

The mating of a wolf and dragon shifter is uncharted territory for both Luca and Tanner, but they are determined to make it work despite widespread prejudice, death threats, and the untraditional pack Tanner finds himself leading. Tanner only hopes that the bond he forms with Luca will prove to be unbreakable.

Tanner McBane ran hard, expertly leaping over rocks and dodging trees as he pushed his body to maximum speed. His paws dug into the ground, kicking up the leaves and dirt of the forest floor behind him. He wasn’t on the hunt. He wasn’t trying to outrun an enemy. The demons chasing him were internal. Tanner was the McBane-pack-Alpha’s son, or at least he was until a week ago.

He had been raised to be the pack’s next leader. He had believed the pack would always be there for him; that they’d have his back. He’d certainly expected his mother to stand by him, but the good Alpha mate she was, she’d remained silent about everything as she stood at his father’s side. His mother’s docile nature annoyed him. Tanner was determined to find a mate who wasn’t afraid to speak up.

Pack bond, loyalty, and respect were solid as long as Tanner had remained exactly like them. As soon as he’d stood up to his father, told him he was gay, and he wanted a male to mate, he’d been disowned. The entire pack turned their backs on him. He was hurt, afraid, and pissed as hell. He was also very much alone with no one but himself to rely on. Tanner learned he liked that. He made his own rules, did his own thing, and he was happy. All he needed was someone to share his life with. Now that he was officially a lone wolf, he could search for the mate he truly wanted, not just settle for whomever his father chose.

Tanner’s need for a mate had been the catalyst for his disownment. He’d announced his sexuality so his father would stop choosing female shifters for him. His father had wanted to find him a mate the minute Tanner had turned eighteen, but Tanner managed to hold him off for a few years. Apparently, twenty-two years old was the limit his father tolerated. He’d been set up with a new female almost weekly until Tanner finally had enough and announced his homosexuality. He no longer needed to worry about his father’s erroneous choices.

A loud, resonating roar of pain ripped through the night. Tanner skidded to a halt, claws digging into the dirt, nose in the air, and ears pricked to the sky. Pinpointing where the scream originated from in the dense forest was tricky. The breeze carried only silence and the faintest scent of smoke and blood. Tanner followed the scent, picking his way silently over the undergrowth, careful not to disturb anything. Heavy breathing interrupted by a growl that rapidly escalated into a roar of frustration once again echoed through the night and led Tanner closer.

Tanner stopped and hunkered down when he came within sight of the scream’s owner. A man struggled on the ground with a large bear trap clamped around his calf. A few inches lower and the massive metal teeth might have severed the man’s foot at the ankle. The scent of blood was strong, but what was noticeably missing was the scent of fear. The man was angry. He was frustrated. But he wasn’t afraid, and that intrigued Tanner. He moved closer, keeping his attention locked on the stranger. His paw landed on a pile of dried leaves, and the man’s head swung to face him. Pain twisted the man’s handsome features, but his gaze was fierce as he stared at Tanner.

Tanner blinked but remained absolutely still. This man…he wasn’t human. He didn’t smell human, and he didn’t act human, but he was amazingly beautiful. Dark-blond hair hung limply over his tanned forehead and curled slightly at his ears. Dark-brown eyes zeroed in on Tanner and narrowed menacingly.

The man’s voice rumbled, coming from deep within his chest. Tanner took a step back. This man shouldn’t need his help. He was another shifter, and worse, he was a dragon shifter. From his disheveled, fatigued appearance and the fact the bear trap’s teeth were still snuggly buried in his leg, he was a substantially weakened dragon, but still dangerous. Knowing just because the dragon shifter had a steel trap on his leg didn’t mean he was helpless, Tanner backed away without breaking eye contact. The dragon slowly disappeared from view as Tanner moved deeper into the surrounding trees. Once out of sight, Tanner turned and ran.

“Come back and help me, or I will hunt you down and eat you for dinner, you pathetic dog,” the dragon yelled.

The insult was cut off by an agonized scream that filled the night. The shifter must have moved the wrong way and jarred the trap. Tanner wasn’t strong enough in human form to remove the trap, and as a wolf with paws, instead of fingers, he was useless. If the dragon was stronger, he would be able to free himself. Helping a dragon shifter regain his strength was a dangerous proposition. All paranormals knew dragons and wolves didn’t get along well. Tanner often wondered why and considered asking his father on several occasions, but he’d never followed through. Ethan McBane was not one who enjoyed being questioned.

Tanner located the herd of deer he’d been following and hunting over the past week. Dragons weren’t picky eaters, especially when in such a weakened state. Tanner wasn’t all that educated when it came to other shifters, but he vaguely remembered being told dragons preferred their prey be alive until they ate it. With that in mind, he took down a female deer that smelled sick, making sure the wound was debilitating, but not fatal, and dragged her back to the dragon.

Tanner tugged the heavy deer through the trees into the small clearing where the shifter lay. It had been more than an hour since he’d left to hunt for food for the man. The dragon appeared even more weakened by the time Tanner returned, no doubt from the continuous blood loss he was suffering. The man rolled his head toward Tanner and licked his lips as the scent of blood reached him. He pushed up onto his elbows, teeth elongating and eyes swirling gold, as Tanner pulled the still-struggling deer closer.

“You brought me dinner. Aren’t you a good pup,” the dragon shifter said.

He latched onto the deer’s leg with surprising force and pulled the animal closer to himself. Tanner growled, deep and low, baring his teeth as he backed away. Even in a weakened state, this dragon was powerful and dangerous. Plus, Tanner didn’t like being called pup. He was a young wolf shifter, twenty-two years old, but he was far from a puppy who needed protecting. The fact he was capable of sustaining himself and feeding an injured, bleeding dragon was proof enough.

The dragon wrapped a strong arm around the deer’s body while the other gripped the head. The animal struggled as the shifter sank his teeth into the neck, snapping it in a swift death blow, and then began to feast. Tanner backed away another few feet, well out of reach, and wondered if he should leave now or wait. He knew, once the dragon had fresh meat to strengthen him, he’d pry the metal trap from his leg on his own. Tanner wasn’t sure he wanted to be anywhere nearby when the man was free, especially after seeing him tear into the deer carcass as if it were paper. When most of the deer meat was gone, the dragon pulled away, blood dripping from his fangs and covering his chin and neck.

Tanner watched from his crouched position among the trees as the dragon closed his eyes, turned his face upward, and the blood soaked into his skin. When the shifter’s eyes found Tanner, they shined a brighter gold and not a drop of blood marred his perfect skin. The dragon pushed the remainder of the carcass away and turned his attention to his leg. Gripping the thick, saw-toothed edge of the trap, he forced it open as he let out a loud roar.

Tanner jumped to his feet, ready to run at a moment’s notice, as the man steadily pulled the sharp teeth from his skin and removed his leg from the iron. He threw the trap into the woods, and Tanner heard the thud as it landed dozens of feet away, testament to the dragon’s renewed power. Tanner’s gaze was glued to the dragon’s leg as the wounds knitted themselves back together. Tanner had an accelerated rate of healing as well, but the wounds the dragon had suffered would have taken Tanner days to heal, assuming he’d been able to free himself in the first place. Tanner lifted his gaze to the dragon’s face. His eyes had returned to their deep, rich brown, but his hair was damp with perspiration, the curl more pronounced, hanging wetly around his face. The man had incredible strength, but the effort of removing the trap had taken a toll.

Distant voices floated on the breeze and Tanner’s ears pricked. The dragon’s acute hearing picked them up as well. He rolled to his knees into a crouch, ready to pounce, his fangs once again elongating, preparing for a fight. Tanner flattened his ears to his head and tucked his tail, his lips curling up to reveal fangs of his own. He bent his knees, the muscles in his legs ready to launch him whichever direction was required. Three men burst through the foliage, rifles in hand. 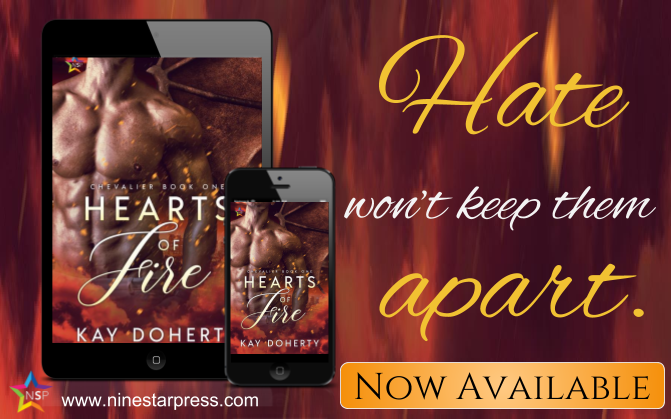 Kay lives in Colorado with her husband and their animal children. Family is important to her so there are weekly visits to her parents and frequent text messages with her brothers. She has a severe addiction to coffee and Mexican food. She loves to read and write and can easily become consumed by it for hours, much to the dismay of the husband and dogs. On occasion, she can be convinced to venture out into world of the living.