The problems of the Outer Verge are stacking up for Ales, now a commander of the Union fleet. From rebellious priests on Jansen to terrifying rips in space sucking matter out into the unknown, not to mention jealous lovers scattered across space, Ales is pulled in infinite directions. Disrupting the Galactic Balance isn’t so simple, and Admiral Turo is also a hard man to please.

While trying to secure a crucial trade deal on the heterosapien world of Nelu, Ales struggles to ignore the stark inequalities cutting through life in the galaxy. If he’s not fighting for a future free from the horrors that blighted his past, what’s the point of living?

With the Outer Verge bitterly divided and factions readying for war, the new horizons Ales dreamed of feel galaxies away.

I woke with a stretch, trying to catch the fraying edges of a hot, summery dream about my lost home-world, Teva. Then the straining sensation of my cock pushing against its citanium cage kicked in, a daily reminder of my submission to Turo, and to the Union for which he stands. Swapping my freedom to save the frozen world of Jansen had made me an accomplice to Turo’s attempts to bend the galaxy’s Outer Verge to his green-eyed will.

The cage has some give; it flexes when I’m soft and relaxed, so much so that I can barely even feel it when walking around. But in the mornings, when the curse of male biology hits, I’m reminded of its presence. Turo might be on the other side of the Outer Verge, or the other side of the galaxy for all I know, but part of him is always with me. Reminding me, he’s in control.

Even when I’m not caged, I act as if I am; not touching the area, not sleeping on my front; imagining my own relief coming only from subservience to others. Admiral Turo constantly reminds me I’m nothing but a receptacle. A hole for his pleasure, a slave to his desires. Although when I’m not chained up in his private quarters on the ship, like today, I’m Commander Ales of the Union, tasked with difficult negotiations on the heterosapien world of Nelu. We need their minerals for our STAR drive, but their planet is still stubbornly aligned with the Trades Council. Simply being here could get me killed. Get us killed, as my security guard Yovnan kept reminding me.

“Commander, are you ready?” Came the sound of Captain Yovnan’s voice accompanied by a knock on the wooden door.

“One minute,” I called back; although it was hardly a door, he could probably see right over it if he stood on his tiptoes. See me lying here naked on the soft rugs piled on the wooden floor, a silvery metal cage around my cock, in contrast to my night-black skin, a still unusual sight in the cold worlds of the Verge. It wouldn’t be a bad thing if Yovnan saw me; in fact, I’d rather hoped to turn that stiff, professional, former-corporation-turned-Union officer into one of the small but growing number of men in Union-blue uniforms who were happy to use me. Although the time I had to turn him was quickly running out.

I reached over to the pile of clothes on the floor and grabbed my wrist-tech. The thin silvery metal melded to my wrist, coming alive with a flurry of updates and messages.

I checked the news bursts. Turo’s upcoming negotiations hadn’t even made the top story headlines.

I tapped the third one.

The bitter dispute between the Trades Council and upstart Union that has crippled the Vergian economy is to be the focus of high-level discussions in the coming days. The Union of the Outer Verge, which previously provided security services for the Trades Council, seized control of the Jansen system a year ago. Since then, nearly half the systems in the Outer Verge have fallen under its orbit, precipitating the most serious political and economic crisis for the Outer Verge in living memory.

I closed the story, about all the Standard Galactic I could read at once. More messages from Franx:

Ales, I’m worried. Can you answer me already? Why are you ignoring me???

I swiped the messages away, pushing the problems on Targuline to the back of my mind. I eyed my black trousers and thin white T-shirt, more than enough for the sweltering Neluian heat. They were the clothes I used to wear, all that time ago before putting on the blue tunic. On this mission, though, we were incognito. Trades Council spies could be anywhere, and although the Vexans were allegedly interested in switching sides, the presence of two brazen Union officials on Nelu would shatter the uneasy truce between the Union and the Trades Council and most likely plunge the Outer Verge into all-out war. 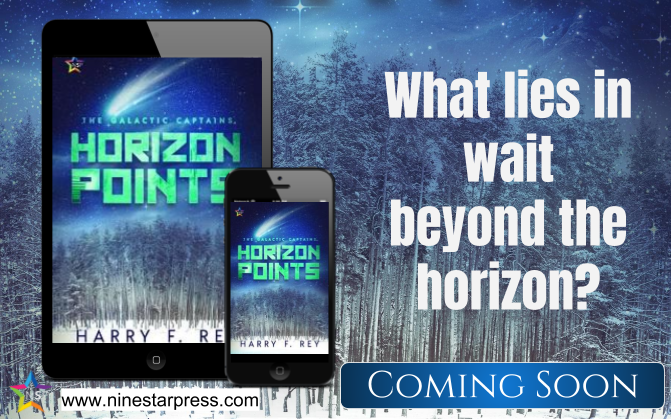 Harry F. Rey is an author and lover of gay themed stories with a powerful punch with influences ranging from Alan Hollinghurst to Isaac Asimov to George R.R. Martin. He loves all things sci-fi and supernatural, and always with a gay twist. Harry is originally from the UK but lives in Jerusalem, Israel with his husband.