Eridan wields the coveted bardic rank of Master-Singer to keep his dying race’s culture alive in a brutal world of magic and war. He doesn’t know Sfassa, his brawny wife and musical partner, traded her fanged-and-furred alien shape for a more-human one so she could be with him. Their idyllic marriage shatters when, wounded by an assassination attempt, Sfassa must forever return to her birth shape and her own people.

Eridan still adores his wife and unborn child, but his prim religion and heritage now forbid his marriage. Only the Northwarden—a dangerously charming, genderfluid sorcerer who enforces civilization’s uneasy peace—can guide him toward a solution. Eridan finds he likes the Northwarden far too much for comfort.

Eridan can risk life and sanity to gain shapeshifting and Sfassa, or live a secret and protected life as the Northwarden’s lover. To keep them both, he picks a third audacious path, testing all his skills against vicious assassins, meddling volcano goddesses, his own dearly-bought pride, and the malevolent, sapient heart of the planet itself.

In the distance, a series of chords eased into a lively tune: the Witch-Queen’s daughter playing with growing confidence on her new girwood harp.

On the other side of the night-shrouded garden, Eridan Sydall, Master-Singer of all Lonhra, reeled homeward dizzy from wine and compliments. He’d only made the tall harp. By the time the princess grew into it, she’d be a Master in her own right.

Seeking his and Sfassa’s guest apartment, Eridan followed tiled paths and stairs between lush teal grass plumes, tall blue trees, and golden-glowing suncrystals on bronze pillars. The garden screened most of the Witch-Queen’s low palace on three sides. To the east, where the garden sloped down, Eridan glimpsed the lights of Throng, a sprawling tropical city where no building rose more than three stories from the rich soil.

Just when he thought himself completely lost, Eridan spotted two half-familiar palm trees on the north end of a terrace. A bronze bracket on one tree supported the Master-Singer’s banner, its black and dark red fabric rippling languidly in the night breeze. A suncrystal lamp hung from a bracket on the other tree. From the banner, lamplight picked out flashes of the silver emblems of his rank—harp, waves, and seven stars.

He navigated another short path through a dimmer courtyard, then pushed open a carved wooden door. Inside, the dark suite smelled of exotic flowers, clean-scrubbed tile still faintly damp, and a whisper of Sfassa’s musky-sweet scent.

Of course, she wasn’t back from the queen’s library yet. Eridan grinned, recalling the flustered archivists when they discovered the Master-Singer’s excessively tall, brawny barbarian wife was an avid scholar in her own right. Once convinced of Eridan’s safety in the palace, Sfassa spent her free time scribbling notes and comparing old folklore texts.

Eridan’s smile faltered as he noted the darkness in the suite. There should have been two ceramic lamps caging suncrystals, one in the salon where he stood, one over the arch leading to the kitchen and the bedchamber.

Cold, sharp metal touched the right side of his neck. The front door closed quietly behind him.

Eridan tensed. He had a knife at his belt and enough skill to use it in tight quarters. Instead, he breathed acrid chemical fumes, and his scream died in his throat. His muscles stiffened, locked in taut tremors. Something was horribly wrong in his brain, even his internal voice broken by pulses of static.

“Master-Singer, the silence-drug won’t kill you.” His assailant plucked the knife from his pocket and hauled his body back against her chest. “Go too long without the antidote and you’ll never write or babble more than nonsense again. Much less sing to the wrong ears. Don’t fight it. The faster your heart beats, the faster the drug will settle in your throat and brain. My sisters and I won’t kill you, you ugly little man. You’re to watch while we butcher your mongrel whore in front of you.”

Eridan slowed his breath, but he couldn’t calm his brain. If this was the infamous silence-drug he had half an hour at most. Who directed the attack? Who would know the two things he feared most to lose? Half the world, he thought next, cravenly regretting the last several centuries of being professionally obstinate.

The assassin didn’t speak again. Through the fog settling over his thoughts, Eridan tried to place the others by the sounds of their soft breaths and minute shifts of posture. They ranged around the door. Past the single window looking out on the garden, a soft rustle told him more people waited under the arch to the bedchamber.

The fog lifted a little. Eridan used the moment to aim his memory back a scant handful of hours. Had Sfassa been wearing her spears this evening? When she wasn’t in full armor, she wore a spear harness with the long leaf-shaped steel blades of her kori-spears jutting up like deadly feathers. Sfassa lived within arm’s reach of her weapons and felt naked without them.

The silence-drug worked differently on Eridan’s body than on the people it was meant for. His thoughts cleared enough to count his attackers from their breathing patterns. Five or six other people in the room, not counting the woman who restrained him.

The knife lost, he needed a distraction. He could move his right hand just enough to slip into the hip pocket of his own cotton robe. His fingers gripped the cool rounded shape of a glazed porcelain gourd-style flute, its tiny proportions meant for a Sirrithani child but just right for him. The young heir of Throng had formally traded it to him this morning for the girwood harp he’d crafted for her.

Gripping the eggshell-thin ceramic bulb, Eridan slowly flexed his wrist out of the pocket. He guessed the assassins used some kind of spell or artifact to let them see in the dark. He didn’t want them looking too closely at him.

Breathe and think. Sfassa would walk up to their door, probably with a satchel of notebooks in hand. Would she notice the lamps out? Would she scent the drug and Eridan’s fear?

Out in the garden beyond the banner, Sfassa called a happy farewell to someone. Her footsteps slapped closer and closer to the main door.

Now. Eridan opened his fingers. The little flute plummeted straight down onto the tiles and shattered noisily. Eridan heard a faint ping and a ripping sound at the same time.

His captor bit back a curse as she dragged him into the kitchen. Steel cut a fraction deeper into his neck. “You little Dana pest,” she whispered, lifting another drugged cloth to Eridan’s face.

Sfassa hurtled through the salon window in a crash of broken wood and ripped silk mesh, bringing some of the outer light with her. She howled as she dove low into the dim salon, avoiding the blades slicing where her throat should be. Light glinted against Sfassa’s feathery short mop of white hair. More faint silver sleeked along her bare body and shone off her spears. She’d stripped outside and weighted her dress with something.

She came up like a storm-surge, swinging her dress in a long, low arc. Two assassins fell with their legs wrapped in its tangle. She decapitated another with one spear, then stepped back and stomped down hard on two throats.

Their metal gorgets crushed before Sfassa’s considerable weight broke their necks. The remaining attackers paused. The one holding Eridan gave a frustrated hiss and dropped the second drugged cloth.

“I’ve the night-sight, too, dog-bitches, and I can smell you,” Sfassa growled in her low, burring voice. With another metallic ping she pulled her second kori-spear from the scabbard on her back. During the messy, grunting chaos Eridan struggled to stay upright, keep breathing, and remember his own name.

“She’s good. No matter. They’ll wear her down and gut her where she stands,” the assassin gloated softly in his ear. “Every blade but this one is poisoned.”

“I’m harder to kill than you think,” Sfassa snarled, swinging her head side to side, then orienting on the whisper. Someone gurgled their final breath behind her.

Eridan reached for the bare hand splayed across his chest, then wrenched back the woman’s little finger until it dislocated. She yelled as her arm swung wide. He ducked. His ear stung from the knife. Sfassa’s spear hammered into the assassin’s chest inches over his head, cleaving sternum and driving straight through heart, spine, and the tiled wall behind. The assassin choked and slumped, her slack fingers letting her knife bounce off Eridan’s shoulder and clang on the floor.

Sfassa gasped out, “Eridan? Little bard? Are you hurt?”

Eridan couldn’t answer. Shouts and running footsteps came through the garden, and he prayed it wasn’t more assassins. He stopped fighting gravity and let himself slide down the dead assassin’s legs, to sit on the now-filthy floor.

How many Master-Singers had been in enough battles to know the aftermath by scent alone?

You married Snowdancer, a wry part of himself warned.

Some of the blood smelled…wrong. Too familiar, even to his stunted nose.

Sfassa set down her right-hand spear, then found the salon lamp and unshielded it. Warm golden light spilled out over blood, steel, and slumped bodies. So much blood. Sfassa stood over the lamp, her strong body naked save for her harness and the shredded blue rags between it and her shoulders. Though she still held the left-hand spear ready, she smiled in sudden relief at Eridan.

“Well, love, I was expecting something like this since you sang heart back into those landcaste serfs outside Autanqa. But in the palace itself? And against me?”

Eridan forced out a single noise of sheer horror.

The first of the queen’s guards burst in through the door just as Sfassa looked down. Blood sheeted over her dark-bronze hips like a new skirt. Pink-gray intestines and pale yellow fat bulged from the long diagonal slash across her upper belly.

She rolled her eyes as if at a trifling setback. Said something filthy in a barbarian dialect, dropped her spear, and held her insides within the cut. Sfassa looked back up at Eridan, her next quip and fierce grin fading as her gaze tracked along his shaking body and frozen face. Her tall, whisker-fringed ears went flat against her skull. 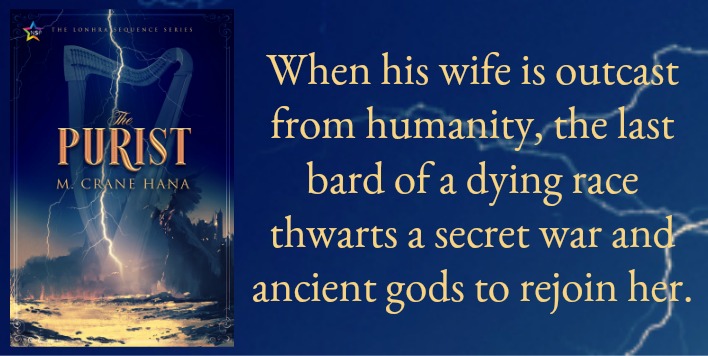 M. Crane Hana lives in a flat place filled with cactus. She writes romances in all flavors, spends too much time world building her sword & planet fantasies and space operas, and makes museum-grade artifacts from cultures that never existed. Publishing credits: (as Marian Crane) ‘The Blood Orange Tree’, Such A Pretty Face anthology, Meisha-Merlin 2000. ‘Saints and Heroes’, Thrones of Desire anthology, Cleis Press 2012.