Title:  Running Out of Air

Inanna Drew has a problem, and, of course, that problem is a boy. Though she’s quite content to read her books and excel in school, he bothers her and seems incapable of taking a hint. Thus this is a journal, nay, a chronicle that she must put to paper to explain, in her own voice, why he doesn’t deserve the time of day.

All of this changes after a sudden upheaval in her life, making Hadrian Marshall less of a pain in her side and more of a friend to be counted on.

(Scratched in a worn notebook)

I am a self-admitted fool, which probably jettisons me out of the category by virtue of the self-admission. Foolishness, to me, always seemed to be a want of realisation more than anything else, but I am still foolish, and foolishness always leads to trouble. That is why I’m writing this all down. Maybe someone can help me if I can show them that it started here or perhaps there, later on.

Anyway. To the point. I don’t think I can finish school, not here, not under these circumstances. I mean, well, I’d really rather not. After two weeks of nerve-racking, nail-biting stress, I am about to reach the end of my rope. Why, you may ask. Why is this straitlaced, straight-A mathlete about to toss herself into the nearest lake with stones in her pockets? (Oh, poor Virginia Woolf) A boy, that’s who. How damn trite.

And I’ll try to warn you before I drown you in allusions (if you will forgive me the pun).

He’s just so damn annoying. He refuses to leave me alone, insists on talking to me, tries to insinuate himself into my life. What on God’s green earth is he doing? Is he trying to badger me to death?

I mean, I do like people, but not when said people are parading themselves before me so incessantly that I would rather die than see another sickeningly false-friendly face. I like my space, thank you very much. Perhaps I should start at the beginning, so you may fully comprehend this boy’s single-minded quest to bother me to death.

All right, the first day of school is usually more uninspiring than sugar-free fudge unless the senior class plays an opening prank, which they did not because my class is full of washed-out ne’er-do-wells without a handful of brain cells to share amongst them. At least, when it comes to actually breaking rules and sowing chaos like proper teenagers.

So life goes on the way it always does. The smooches from boyfriends to girlfriends who haven’t made out in school since, like, the end of summer school; the fist-pumps and giggly hugs from the jocks and fashionistas respectively; the loners gravitating to the new loners transferred in from other schools to impart their invaluable knowledge of where to best hide when “expressing your sorrow” (i.e.: whining under a stairwell listening to loud “musak” and writing insufferably angsty poetry about the colour black and the joys of leaving their confining mansions/obscenely wealthy but damningly inattentive parents behind).

Losers, the lot of them. I can’t wait to escape this chasm of anti-intellectualism for the greener pastures of university. That is where I shall go far, where I can correct the teachers and have them respect me for it, not give me a detention or send a letter home. I shall be an award-winning essayist whilst teaching at Harvard, my future alma mater. I’ll show those idiotic “teachers” when I have my PhD in the time it took to finish their sissy education licence… Anyway, I digress.

The only thing really interesting in those moments, because trust me the AP classes were not riveting in the least, was watching the new students flounder in our labyrinth of a school. I swear the thing is built to pen in a Minotaur—

Let’s just head off that digression before it can fully mature, because believe me, I can ramble about Greek myths for ages.

First period had some sniffling girl who arrived earlier than me. Which I had thought was patently impossible until that moment, I assure you. Second period had some new student from Dubai with a smartly be-suited translator in tow (Health, why must I take you?). Third period was absolutely soulless, very little surprise there. When has anything interesting happened in a sociology class? Fourth period was where the action was. That was where I met my first and only enemy in all of high school.

He was leaning back in his chair, languid and sure like a cat in a room of exceptionally fat and stupid mice, which it might as well have been. I disliked him instantly. Well, maybe not exactly instant of course, but it sounds dramatic, and thus must not be scratched out. Ms. Fish, as I secretly call her, softened her brows, hardened by years of public school teaching (She only transferred here on the good graces of her second cousin, Mr. Collins, the principal of Jackson Academy of the Sciences), and shocked the rest of us to actual quiet.

“All right, Hade.” What the flipping heck. I just stared at her for a minute, but…she was just the very image of a lovesick teenager, two seconds away from spouting love poetry she didn’t understand to impress a boy so out of her league as to be pitiful.

Ms. Fish, one of the nastiest, cruellest teachers I have had the misfortune to pretend to learn from, had bestowed the fainted glimmer of a smile on a student. A student who had only said, what, six words to her, and she was already wrapped around his finger. What kind of child is that adept at manipulation? I had no idea, but I surely did not approve. I should be that child, not this impudent upstart! I have forgotten more psychology than he will ever learn, I am sure.

Ms. Fish shook herself and returned to the roll. I returned to my book. It was new, a promising doorstopper about a poor Victorian girl picked by some sadistic count to play Pygmalion, (otherwise known as My Fair Lady for the film and musical lovers out there) only to rip her apart, bit by bit. At least, that was my guess. Sometimes, good books surprise you.

In any case, I was finishing up the introduction by a modern author when the lesson began. God, math is so tedious when your father’s a mathematician. Class finally ground to a halt, and I waltzed to the only class I cared a modicum about, drama.

I may not seem it, but I have an incredible soft spot for the arts. The only reason anyone in the student body knows my name is because I played Puck in A Midsummer Night’s Dream last year. I’m rather proud of it, actually. It took two years to prove that I was good enough for a role that didn’t also double as a techie.

In any case, our teacher always tells us the fall and spring lineup on the first day so that we may prepare for the roles and pick out parts to practice. I had sent in a request for a Shakespeare play I like (Merchant of Venice) and a musical no one would understand, let alone recognise. Acting is the only thing outside of books that really gets me excited about school anymore. Everything else is excess.

That smooth talker from statistics had to go and ruin it all by winding his way to the front row of the auditorium, smiling and winking through the crowd of giggling no-talent prima donnas. I sighed and rolled my eyes, waiting for Mr. Tucker—part drama teacher, part wrestling coach—to make an appearance. He did not disappoint. In he stalked from stage right, looking outright menacing and sending the entire audience into a dead silence.

“Most all of y’all know the rules, but for those that forgot: No fu[dge]ing around (I patently refuse to swear in this volume). This is my theatre, and I’ll throw you in my workouts as tackling dummies for the team if you stop payin’ attention. You get me?”

“Yes, sir,” we chorused. Some people were cringing and regretting their decisions, but those in his good graces just enjoyed their discomfort (myself and Araz, really). I looked for the self-possessed jerk in front, to see if he was wetting himself in terror and sprinting toward the doors. I couldn’t see his face, but it didn’t seem like he was ready to bolt at any second. Drat.

“Good, the fall play sheet is in the scene shop. Be back in four minutes.”

I made the arduous journey four yards to the door from my seat (the closest chair to the shop from the auditorium). On the other side of said door, a slip of paper:

Phantom of the Opera (Dammit)

That last one deserved a little concern and attention. When had Tucker ever written TBA or changed his mind about a play? Never, that’s when. I slipped away before I ended up trampled by the stampede and ventured forward to find my teacher sitting on the stage, reading the paper. 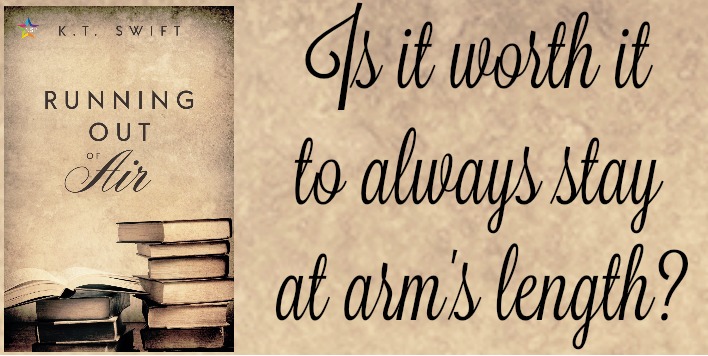 Born and raised in Nashville, TN, K. T. Swift works as an archaeologist by day and a writer by night. When she’s not writing technical reports and cataloging artifacts, K. spends her free time writing fiction and cooking weird and exciting dishes. She also loves travelling and has tooled around in Europe for the last four years.

3 thoughts on “Running Out Of Air by K.T. Swift [Book Spotlight – YA / Contemporary /Aromantic / Diary]”