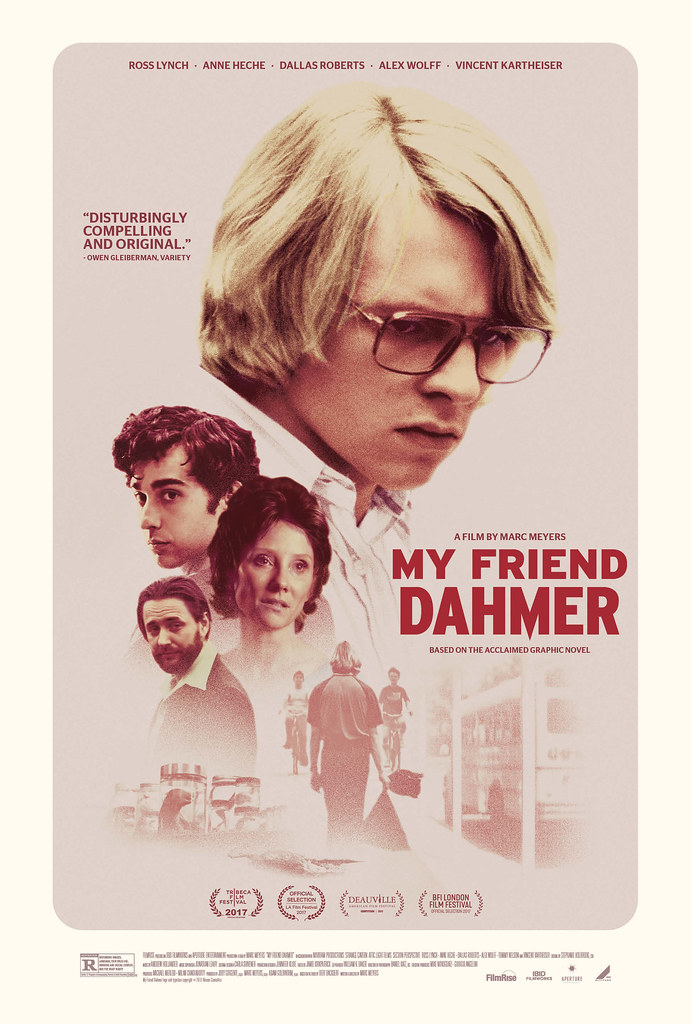 Welcome, one and all, to my latest film review! Today, I’m looking at something a little different for me: a biographical drama by the name of My Friend Dahmer.

So, to the technical details. The film tells the true story of notorious serial killer Jeffrey Dahmer’s early life, starting in his high school freshman year and running right up to his first murder. It’s based on the graphic novel of the same name, which was itself written and illustrated by John ‘Derf’ Backderf, who was one of Jeffrey Dahmer’s friends during his high school years in the 1970’s. The film was written and directed by Marc Meyers and stars Ross Lynch (Austin Moon in Disney’s Austin & Ally) as Jeffrey Dahmer and Alex Wolff (Alex Wolff in Nickelodeon’s Naked Brothers Band) as Derf.

Now, the first thing you probably notice is that the two main stars of the film are from what would generally be described as wholesome kid’s shows. One thing to note is that the real John Backderf was actually really enthusiastic about Ross Lynch’s casting in particular as it was so against type for the actor that it would make people feel uncomfortable. And my word he was right. Ross Lynch puts in a powerhouse performance here, and really demonstrates how much more range he has than his Disney outings would have you believe. In particular, he shines during Dahmer’s moments of conflict with his fantasies, and in his awkward nature when interacting with others.

That’s not to say that the rest of the cast are in any way poor by comparison though. Alex Wolff’s Derf comes across as a regular teen in the most genuine sort of way, and despite essentially using Dahmer, you do feel some concern for him towards the end of the film. Meanwhile, Vincent Kartheiser (Connor in Angel) makes good use of his screen time as Dr. Matthews, and both Anne Heche (Suyin Beifong in Legend of Korra) and Dallas Roberts (Angus Partridge in The L Word) do a fantastic job in their roles as Dahmer’s parents.

The film is nicely shot, not only using Dahmer’s actual previous home for a lot of the filming but also capturing the visual feel of the era in which it is set. Trickery is kept simple – such as showing a low shot of Dahmer clutching a corpse on his bed, then cutting away to a high angled shot to reveal it as a fantasy – and this really aids the film. The key here was to paint a realistic picture of the events that helped shape Jeffrey Dahmer in to the man that he became, and in that, it is very successful. When set against Ross Lynch’s performance, this makes it difficult to even try to pretend that none of the events happened, which only adds to the uncomfortable nature of the film.

By far, it is the story itself that creates the most discomfort though. If you were unaware of his crimes, Jeffrey Dahmer committed several atrocities between 1978 and 1991. In total, he murdered 17 men and boys, with their deaths accompanied by rape, dismemberment, necrophilia and cannibalism. There was to be no forgiveness for these crimes, nor should there be. During the closing statement of his trial, Dahmer himself described himself as ‘evil’. My Friend Dahmer does not ask anyone to forgive Jeffrey for what he became, but it does shine a light on how he ended up on the road that he did.

Jeffrey Dahmer was an outcast. He struggled with social interactions, had a morbid fascination with how animals were put together, and had a tumultuous home life born from his mother and father’s rocky relationship. And so, when a small group of his peers take an interest in him, he felt compelled to do what they wanted in order to fit in. If that meant faking epileptic seizures and palsy in school or a public shopping mall, then he did it. Through all of this, his friends treat him as a sideshow attraction, and to make matters worse, he was on some level aware of this. To top it all off, he was struggling with not only his morbid fantasies, but his sexuality. In a less enlightened time than our own, that simply added to the issues he was having at the time.

Knowing how he would end up, it is hard to feel sympathy for Jeffrey Dahmer. At the same time though, there are so many moments in the film that make you think, “These days, someone surely would have intervened right there.” Then, there are the moments like Dahmer photobombing all the school club photos that remind you that he was, on some level, a regular kid himself. Where the film so effectively shows not only the warning signs but the lack of action from those around the future serial killer, the film ends up leaving the viewer conflicted. There is no question as to Jeffrey Dahmer’s guilt, but you can’t help but feel that someone stepping in even once would have potentially prevented him from ever reaching the point that he did, especially when you see his moments of actually fitting in.

Interestingly, this is perhaps best illustrated by the film’s closing scene. Now a high school graduate, Jeffrey Dahmer first attempts to lure Derf into his home with the intent to kill him. When this plan fails to come to fruition – perhaps due to a combination of Derf’s remorse over how he treated Dahmer and his clear realization that his friend had changed for the worse – Dahmer goes out for a drive. During this, he picks up a hitchhiker named Steve Nicks, who is trying to get home after a concert. As the film fades to black, the subtitles reveal that Nicks was Dahmer’s first victim, and that after being picked up by Dahmer, he was never seen again. This fade to black approach really rams home that by this point, the story of Jeffrey Dahmer as a teen who needed help is over, and all that remained was the trail of death that was still to come.

In all, My Friend Dahmer is many things. It’s a harrowing account of the early life of one of the world’s most notorious killers. It’s a tale designed to leave viewers conflicted as to how they feel about a man that caused so much suffering for others. And finally, it’s a reminder that failure to help those in need can have dire consequences. Jeffrey Dahmer was not a man that deserved – or even wanted – forgiveness; but he is a warning as to what can happen when issues aren’t dealt with.

If My Friend Dahmer sounds like it might be something you’d enjoy, then why not click on the affiliate link below? You can grab the DVD or the original graphic novel, and I’ll get a small commission.